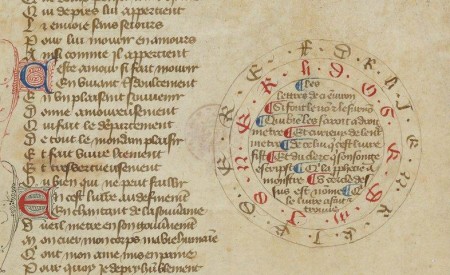 Colophons — concluding meta-text concerning the production of the text — exist in about 15% of medieval manuscripts.[1] The content of medieval colophons varies widely. Items that might be included in the colophon are:

This book is finished; may the scribe be free from sin. [2]

Another frequent type of medieval colophon exonerates the scribe for changes made to the text:

the reader emends, and let him not blame the scribe [3]

A late-fourteenth-century manuscript has an amusing colophon:

This work is written master give me a drink; let the right hand of the scribe be free from the oppressiveness of pain. [4]

The scribe is usually understood to be the author of the colophon. Medieval colophons commonly refer to the scribe in the third or first person.

Medieval colophons occasionally have more elaborate forms of address. The sole surviving late-fifteenth-century, Old French manuscript of The Mirror of Simple Souls has the following colophon:

For him who has copied this book
I pray to you in your goodness of heart
To pray to the Father and the Son,
The Holy Spirit and the Virgin Mary
That after this present life
In the company of the angels
He may give thanks and praise to God.
Amen. [5]

The third person is used for the scribe (“for him who has copied this book”). The second person (“you”) refers to the reader. The first person (“I”) is most easily understood as the book’s author. The author prays to the reader to pray to God that the scribe will praise God (implicitly in Heaven after a life of virtuously copying texts). That is a complex chain of personal relations and actions. It suggests the author offering spiritual benefits to scribes who would copy the author’s work.

Medieval colophons written in verse might use different grammatical persons to refer to the same person. Consider a rhyming colophon written in Italian early in the fifteenth century:

I pray that God grant eternal peace
to the soul of the one who wrote
this little book, which I like so much.
And let his saints, as I’m determined,
pray to the Virgin Mary too,
and Saint John, who said so much that was good.
Let it please you to defend her from all things evil,
her soul and body, and protect her from her enemies.
Help her, Lord, since help her you can. [6]

The “I” of the first four line speaks about one associated with a verb for the physical act of writing (“wrote” / scrisse). The praise for the book (“which I like so much”) would be prideful if by the author, but without Christian moral taint if by the scribe. The “one” who wrote the book is grammatical marked as female. The third-personal “her” for whom prayers are to benefit is also female. The “I” of this colophon could be interpreted as the author praying for a female scribe. However, the scribe wrote this colophon in three works she copied. The “I” and “her” of the colophon more plausibly are interpreted as having poetic grammatical mobility in referring to the same person.

Some ancient authors were keen to encourage others to copy their works. One way to encourage copying is for the author to add a colophon invoking blessings for the scribe. The tenth-century Buddhist text The Scripture on the Ten Kings included explicit admonishments to copy and circulate the text. With similar interests, medieval authors might write colophons to create spiritual incentives for scribes to copy their manuscripts.

[2] This colophon was written in Latin and had a witty form: “Explicit iste liber sit scriptor crimine liber.” Wakelin (2014) p. 29.

[3] This colophon, also written in Latin, has a rhyme that adds force to the message: “qui legit emendat, scriptorem non reprehendat.” Id.

Moreton, Melissa. 2014. “Pious Voices: Nun-scribes and the Language of Colophons in Late Medieval and Renaissance Italy.” Essays in Medieval Studies. 29: 43-73.