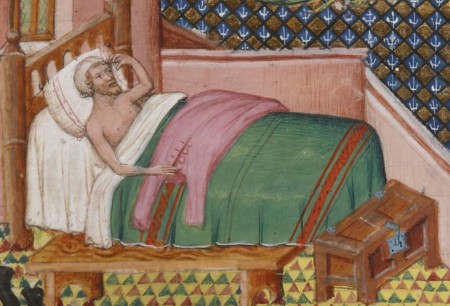 In a leading medieval work of men’s sexed protest, a husband compared his experience of marriage to Christ being crucified. Margery Kempe’s husband provides a less poetic, more idiosyncratic representation of a husband’s abasement. Senile and befouling his clothes with bowel movements, Margery Kempe’s husband ended his life in degrading suffering like that of Christ on the cross.

Margery’s account of her husband’s serious injury lacks compassion and engages extensively in self-rationalization and self-justification. The date and other significant aspects of his injury she didn’t recount or remember:

It happened one day that the husband of the said creature, a very old man more than sixty years old, as he came down from his bedroom bare-footed and bare-legged, he slipped or else lost his footing and fell down to the ground from the steps. His head was under his body and grievously broken and bruised, injured so badly that he had in his head for many days five rolls of soft material to drain the wounds while his head was healing. As God willed, some neighbors became aware that he had fallen down the steps, perhaps through the din and scraping of the falling. And so they came to him and found him lying with his head under him, half alive, all streaked with blood, never likely to have received final confession unless by high grace and miracle. Then the said creature, his wife, was sent for, and so she came to him. Then he was taken up and his head was sewn, and he was sick a long time after, so that men thought he should have been dead. [1]

This account includes no sense of Margery’s fear for her husband’s life. Margery was most concerned with what others said:

people said, if he died, his wife deserved to be hanged for his death, for she could have lived with him as a care-giver and did not. They didn’t dwell together or sleep together, for as is written before, they both with one assent and with free will of the other had made a vow to live chastely. And therefore to avoid all perils they dwelt and traveled in separate places where no suspicion would arise of them having sex. First they dwelt together after they had made their vow of chastity, and then people slandered them and said they used their lust and pleasure as they did before their vow-making. When they went on pilgrimage or to see and speak with other spiritual persons, many evil folk speaking in worldly ways, people lacking respect and love for our Lord Jesus Christ, thought and said that they went rather to the woods, groves, or valleys to use the lust of their bodies so that people should not see or know of it. They, having knowledge of how prone people were to think evil of them, desiring to avoid all occasion, inasmuch as they might be able, by their good will and their mutual consent, they parted asunder with respect to meals and sleeping quarters, and went to take meals in separate places. This was the cause that she was not with him, and also because she did not want to be hindered from her contemplation. And therefore, when he had fallen and was grievously hurt, as is said before, people said, if he died, she deserved to answer for his death.

Margery’s rationalization and justification for her blamelessness is more extensive than her account of her husband’s terrible injury and how it happened. Margery seems to have been an extraordinarily self-centered woman.

Margery took her husband into her home for care only under God’s explicit instructions. In response to her husband’s life-threatening injury, Margery prayed that God would act to save her from blame:

she prayed to our Lord that her husband might live a year and she be delivered from slander if it were the Lord’s pleasure. Our Lord said in her mind, “Daughter, you shall have the blessing you request, for he shall live, and I have done a great miracle for you that he is not dead. And I bid you take him home and attend to him for love of me.

Christianity teaches love of God and love of neighbor. No neighbor is closer than a spouse. To God’s instructions on how to love, Margery responded with a counter-argument:

She said, “No, good Lord, for then I shall not be able to attend to you as I do now.”

Margery seems not to have loved her husband. God, who did not act like a subservient husband, stood up to Margery in her prayer:

“Yes, daughter,” said our Lord, “you shall have as much spiritual reward for caring for him and helping him in his need at home as if you were in church to make your prayers. You have said many times that you would gladly attend to me. I pray that you now attend to him for the love of me, for he has sometime fulfilled your will and my will both, and he has made your body free to me so that you would serve me and live chastely and purely, and therefore I will that you be free to help him with his need in my name.”

The Lord praying suggests blurring of God and self in Margery’s mind. The reference to Margery’s husband as someone who “has sometime fulfilled your will and my will both” associates spousal love with judgment of worthiness through obedience. In Margery’s mind, God indicated that if her husband hadn’t agreed to a sexless marriage, she wouldn’t be under any imperative to care for him in his time of need.

Margery cared for her husband without love for him. She took him into her home and cared for him for years:

she took her husband home with her and attended to him years after, as long as he lived. She had much work in caring for him, for in his last days he became senile and lacked reason. He could not ease his bowels in the proper place, or else he would not, but as a child voided his natural digestion in his linen clothes where he sat, by the fire or at the table. Wherever he was, he would spare no place. Therefore her labors were much increased in washing and wringing and her expense too in making fires. He hindered her greatly from her contemplation, so that many times, she should have been irked at her labor. But she thought to herself how in her young age she had a great many delectable thoughts, fleshly lusts, and inordinate loves for his person. Therefore she was glad to be punished with the same person and took it much more easily. She served him and helped him, in her view, as she would have done for Christ himself. [2]

Desire to punish herself motivated Margery to the burdensome labor of caring for her invalid husband, not love for him. Following several sentences outlining her son’s death, she mentioned her husband’s death only in a single sentence, with a third-person reference to her husband:

In a short time after, his father followed the son the way which every man must go.

Many husbands die knowing and experiencing their wives’ love. That’s not inevitable. Dying within a sense of spousal love for one’s own person probably wasn’t the experience of Margery Kempe’s husband.

A neglected spiritual aspect of Margery Kempe’s book is the figure of her husband’s last years. Crucifying someone was the most degrading form of punishment that the Romans imposed. Lacking one’s reason while being in feces-filled clothes is an end that anyone might potentially meet. A redemptive dimension of such humiliating experience is difficult to perceive. The figure of Margery Kempe’s husband gives readers an experience like that of the first Christians looking upon Christ suffering on the cross. Amid large and growing modern appreciation for Margery Kempe and her book, the figure of her husband’s last years deserves more appreciation.

The Middle English, ll. 4240-1, has for the precipitation of his injury “he slederyd er ellys faylyd of hys fotyng … .” Id. translates that as “he slithered or else failed of his footing.” Slithering evokes the serpent of humans’ fall in the biblical book of Genesis.

[2] The chronology of Margery Kempe’s life isn’t well established. She probably was born in 1373. She married her husband when she was “twenty years of age or somewhat more” (1.1, p. 6). Her husband and the one adult son she mentioned probably died in 1432. Bale (2015) pp. xlii-xliii. Margery traveled to Norwich to care for Richard Caister, vicar of St. Stephen’s in Norwich. Caister died shortly before Margery arrived. 1.60, p. 108. That dates Margery’s visit to 1420. She was then newly delivered of a child. According to Margery, Jesus told her to have no more children. Id. That’s a plausible motive for Margery seeking to live chastely with her husband. She and her husband didn’t begin to live chastely for three or four more years. Hence her husband probably suffered his injury in the late 1420s. Margery then would have cared for him for a few years before his death.