When she was about thirty-five, my mom read to me Shel Silverstein’s “The Little Blue Engine” as bedtime reading. My mom still remembered doing that about thirty-three years later. She then gave to me that poem in a book that she made with her own hands.

While the “The Little Blue Engine” supports a violent attack on self-identity, my mom crafted her book beautifully with care and empathy. She embossed on the cover and the title page a small, charming locomotive image that she designed. Having taught herself calligraphy, she wrote the book in a child-simple letter style (she could write much more ornately). At the same time, she used multiple colors for writing the text and used some typographic design that a child would like. She hand-stitched the binding for the book with a soft, silk-like thread, not a hanging rope for self-destruction. 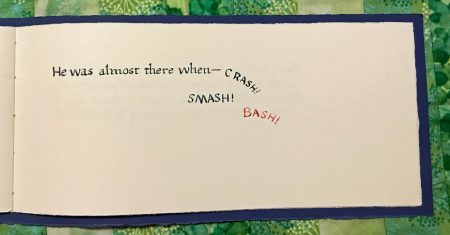 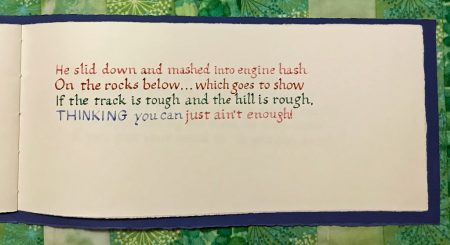 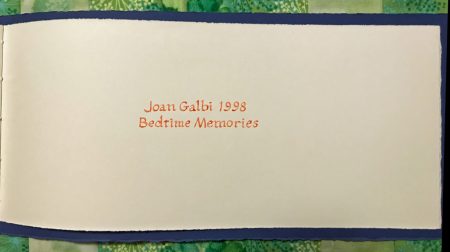 I don’t have any memory of childhood bedtime trauma from hearing “The Little Blue Engine.” I’ve tried to do things that I think I can do, and have failed to do them. For example, I tried to write a great Russian novel, and failed. Failure doesn’t bother me much. I actually like to try to do things for which success is doubtful.

Making this book about thirty-three years after she had read to me “The Little Blue Engine,” my mom was concerned about the ending. We had a long telephone conversation about it. She said she wanted to change the ending. I told her that I liked the ending and that there was no need to change it. She didn’t agree. She wrote an alternate ending and wanted to know what I thought of it. I said that her alternate ending didn’t sound as good and wasn’t as poetic. She didn’t agree. My mom wasn’t one to change her view on anything in response to whatever I said. But she was very generous. She wrote the original ending to “The Little Blue Engine” and a replacement page that I could slide in over the original ending to make it how she preferred. 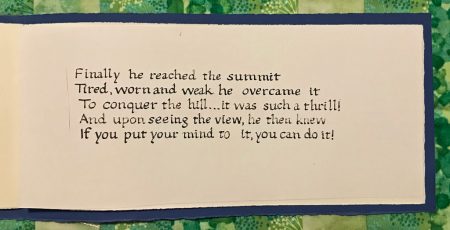 This insertable alternate ending is now my favorite feature of my mom’s hand-made book. My mom’s preferred ending reflects mainstream American ideology across centuries. She lived the American dream as the daughter of an immigrant father who began earning money as door-to-door peddler of women’s clothes in New York City. My mom’s father went on to become a successful small-businessperson. In recent decades academics have droned on incessantly about the social construction of reality. Who wouldn’t want to believe that anything can be and anyone can do anything? The book with the insertable alternate ending incorporates important, cherished ideology. But it also allows uncovering the possibility of disastrous failure.

Within the same Shel Silverstein poetry book that contains “The Little Blue Engine” is another poem providing a radically different perspective. It’s a poem explicitly addressed to a child:

Listen to the Mustn’ts

While she probably read it to me as a child, my mom never said anything about this poem to me as an adult. Two weeks ago my mom died suddenly and unexpectedly. If she were still alive today and she wanted to change the ending to this second poem, I would readily agreed. Those last three verses now scare me.