Bureaucrats are renowned for their dedication and tireless, unheralded devotion. No twentieth-century bureaucratic better exemplifies such devotion than James Hampton. He was a low-level staffer with the U.S. General Services Administration from 1946 to 1964. Working evenings and weekends from 1950 to his death in 1964, he created what one art historian has called “America’s greatest work of visionary art.”

Hampton had none of the advantages of an elite New York artist. He was an African-American experiencing de facto segregation and inhumane discrimination. He was a single man living in a small apartment on a meager bureaucratic salary. He had no social connections with influential art critics, he didn’t attend exclusive happenings with museum curators and gallery owners, and he lacked the education necessary to cite leading artists such as Duchamp, Tatlin, Velázquez, Galbi, and Schmahmann. Hampton had only his devotion, his genius, and his bureaucratic skills. 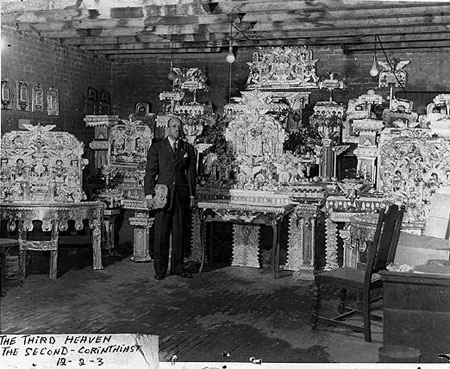 Hampton made the best of his circumstances. In an article written for the exhibition of Hampton’s work at the Museum of Fine Arts in Boston, one of the museum’s curators noted:

An ingenious selection and use of materials and an innate feeling for design characterize Hampton’s radiant work. A poor man, he applied his imagination to the transformation of discarded materials. Merchants in the used-furniture district near the garage remember that Hampton would browse, inquire about prices, and sometimes return with a child’s wagon to carry away his purchases. All of the objects are covered with different grades of gold and aluminum foils removed from store displays, bottles, cigarette boxes, and rolls of kitchen foil. Hampton paid neighborhood indigents for the foil on their wine bottles, and he walked the streets with a croker sack in which to carry his finds. He also gathered used light bulbs, cardboard, insulation board, construction paper, desk blotters, and sheets of transparent plastic, probably from the trash of the government buildings where he worked.

Hampton, clearly drawing upon bureaucratic language and concepts, entitled his work The Throne of the Third Heaven of the Nations’ Millennium General Assembly. Inscribed within this work was the sententious statement, “Where there is no vision the People Perish.” No one who ponders Hampton’s work can believe the pernicious myth that bureaucrats are prophetless and lack vision.

Submissions to this month’s Carnival of Bureaucrats show the rich tapestry of bureaucratically relevant human activity on the web. We are pleased that this carnival continues to grow larger.

B.Y. Clark at Bureaucratic Student: A Public Administration Blog provides lists of prime-time bureaucrats, meaning TV shows that star bureaucrats. Cops and District Attorneys have thirty-four shows listed, teachers twelve shows, and court officials six shows. Elected officials have six shows, but as we’ve repeatedly re-iterated again and again, politicians are not bureaucrats. Sadly, prime-time shows include only one show presenting the office life of bureaucrats. As Mr. Clark notes, being an office worker is the life of most bureaucrats. Perhaps bureaucrats want some time away from the office when they watch TV.

Alan D. Mutter at Reflections of a Newsosaur pondered how many persons “should edit an article before it goes in [sic] the newspaper.” Among more than 400 respondents, 22% favored three or more editors, while 55% favored two editors. Editing is important bureaucratic work. We are pleased that many of Mr. Mutter’s readers support bureaucracy.

Raymond at the Money Blue Book asks, “Would You Give Up Your Right To Vote For A Million Dollars?” He notes that to do so would be quite reasonable. Persons’ willingness to make significant sacrifices to vote is remarkable.

Rob Moshe at Rob Moshe Purpose Realized seeks persons to sign up to help him help others. He explains:

My goal in the next year is to help at least 500 people get closer to their goals and dreams. I will do that through the sharing of ideas, insights, information and connections.

We think Mr. Moshe should aim higher. If he got a job with the U.S. Federal Government, he would be part of bureaucracy that helps 300 million persons get closer to their goals and dreams.

Mark Riffey’s Business is Personal discusses U.S. presidential candidates use of mobile text and voice broadcasting capabilities. As we’ve repeatedly re-iterated again and again, politicians are not bureaucrats. See above.

Freddie Sirmans considers “Can The US Prevent a Starvation Crises?” That’s also the title of his blog, and its only post. Mr. Sirmans observes:

Government itself is not part of a functional economy. It is a necessary parasite that is needed to protect the economy and society. Government is not a threat to an economy as long as it takes its cut off the top and fulfills its role as a protector.

We hope that future posts will more emphatically emphasize that the government is here to protect and serve, which is an important and necessary function, as is that of beneficial intestinal bacteria, such those included new products such as DanActive, a probiotic dairy drink that helps strengthen your body’s defenses.

Anna Farmery at the Engaging Brand Blog advocates curiosity and imagination. She recounts:

I took my cat to the vet last night, and as always I love to learn, so was asking the vet about the treatment. To my shock he turned round and said “Stop being curious, you don’t need to know that is my job!”

Here at the Carnival of Bureaucrats, we take job descriptions seriously. We do not believe that one person should do another person’s job. Ms. Farmery should have told her vet that she would be pleased to receive a lengthy written report, with an appended options memo, examining in detail her cat’s issues. Any self-respecting bureaucrat would be delighted to receive and execute such a request.

Warren Wong at Personal Development made three separate submissions to this month’s Carnival of Bureaucrats. Among Mr. Wong’s submissions, our favorite is his submission advocating commitment. We believe that all bureaucrats should be committed. Sooner or later, most bureaucrats probably will be.

Lorcan Dempsey brain-storms about how to identify documentary gaps. He draws inspiration from Helen Vendler, who wrote:

And since there is no better motive for writing on a subject than a gap on library shelves, I began in earnest, some years ago, to study Yeats’s lyric style.

This is truly inspiring. Bureaucrats recognize no higher calling than producing a continuous stream of documents.

Wilson Ng at Reflections of a BizDrivenLife discusses working for a boss within the bureaucratic hierarchy. He observes:

First you plan together, and then you hire/organize according to these objectives, then you manage or direct, and then the control part comes in monitoring the progress and redefining issues and priorities. and then go back to planning again.

At noted above, Mr. Wong made three separate submissions to this month’s Carnival of the Bureaucrats. The carnival’s regulations clearly do not specify a limit on the number of submissions. To address this regulatory oversight, we hereby initiate a Notice of Proposed Notice of Inquiry (NPNI) asking whether we should seek comments on whether to consider establishing regulations limiting the number of submissions per month. Comments on this NPNI will be accepted for the next six months.