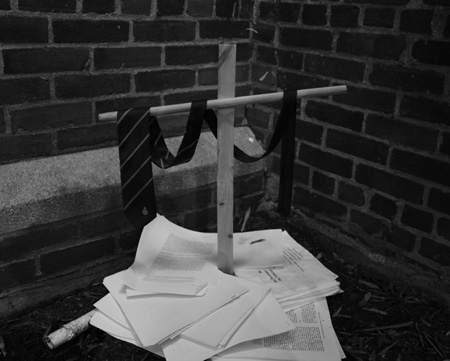 Those moving, ponderous words crawled through my head as I visited a colleague’s grave in the courtyard corner of the old office building (the new building doesn’t have a courtyard, so it doesn’t have a good place to bury workers who die on the job).  Many bureaucrats make enormous sacrifices to serve their job descriptions. Some count the days until retirement and never make it.

We need a memorial to honor all bureaucrats, a memorial fitting and proper,  It should have two ordinary citizens standing in front, at attention and perfectly still, seven days a week, twenty-four hours a day. The changing of the citizen-guard could happen every two or three weeks, with two citizens drawn at random from the population taking over the honor-guard duties. As one of America’s greatest orators proclaimed after the Battle of Gettsyburg:

And shall I, fellow-citizens, who, after an interval of twenty-three centuries, a youthful pilgrim from the world unknown to ancient Greece, have wandered over that illustrious plain, ready to put off the shoes from off my feet, as one that stands on holy ground, who have gazed with respectful emotion on the mound which still protects the dust of those who rolled back the tide of Persian invasion, and rescued the land of popular liberty, of letters, and of arts, from the ruthless foe, stand unmoved over the graves of our dear brethren, who so lately, on three of those all-important days which decide a nation’s history, days on whose issue it depended whether this august republican Union, founded by some of the wisest statesmen that ever lived, cemented with the blood of some of the purest patriots that ever died, should perish or endure, rolled back the tide of an invasion, not less unprovoked, not less ruthless, than that which came to plant the dark banner of Asiatic despotism and slavery on the free soil of Greece?

Other bureaucratic issues this month:

Alok Jha is leading the Guardian in a highly innovative and surely disastrous change. That is to say, he is organizing, socializing, and putting into implementation business rules whereby Guardian bloggers will be able to have the capability such that they will be able if they so choose and the system develops as planned to publish without any editing whatsoever.  Jha himself admits, “It’s a completely new model for us because, at the moment, nothing here is unedited.”  Editing is mission-critical bureaucratic work.  It should be expanded, not eliminated.

The Premier of the Cayman Islands is bashing bureaucrats.  That’s what bad politicians do.  His words should be ignored.

Since I’m preparing a galatine de Poulard, that’s all for this month’s Carnival of Bureaucrats.  Enjoy previous bureaucratic carnivals here.  Nominations of posts to be considered for inclusion in next month’s carnival should be submitted using Form 376: Application for Bureaucratic Recognition.