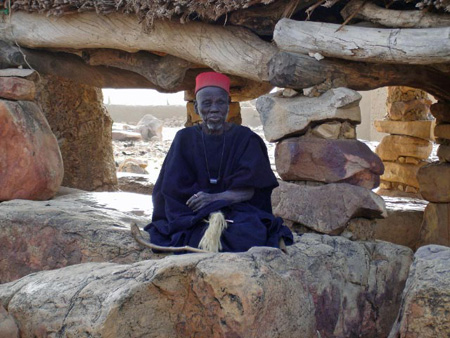 A recent study of the Dogon people living in Mali, West Africa, provides good insight into false biological-paternity belief within broader systems of beliefs.  The Dogon are an agricultural people who live without low-cost genetic paternity testing and without recently developed contraceptives, as well as without television and electricity.  Among 1706 personally and socially identified Dogon father-son pairs, genetic tests indicate 1.8% false paternity attributions.[1]  Most persons in high-income countries today have access to low-cost genetic paternity testing and a variety of technologically advanced contraceptives.  Nonetheless, for people in high-income Western countries today, the corresponding false-paternity statistic is roughly 5%.[2] Hence, compared to high-income Westerners, the Dogon achieve much lower false paternity with much less technologically advanced means.[3]

Dogon indigenous menstrual practices apparently contribute to their low false paternity.  Among Dogon following indigenous beliefs, menstruating women spend their nights in separate huts apart from their family and possessions.  Spending nights in a menstrual hut signals publicly that a women is cycling and hence potentially can get pregnant.  That gives the husband extra incentive to have sex with his wife, and for the husband and his family to be vigilant to prevent extra-pair sex.  In two-thirds of the father-son pairs, the son’s mother reportedly used the menstrual hut.  The prevalence of false paternity among those pairs was 1.3%, compared to 2.9% among hut non-users.  The difference is estimated to be statistically significant.[4] But perhaps more significant for meaningful interpretation is that, even without the use of menstrual huts, the Dogon have low false paternity compared to high-income Westerners.

Our theoretical perspective is that of human behavioral ecology, which sees culture, including religion, as the cumulative product of the reproductive striving of individuals. … we argue that religious texts reflect the reproductive dilemmas and genetic interests of their authors—who were virtually always males. …  In most religions, males have traditionally held the important positions of power and authority.  Among the laity, males have enjoyed greater religious freedom in guiding the religious choices of families and nations.  Males have therefore disproportionately influenced sexual morality, embedding tactics that serve their reproductive interests—especially the promotion of paternity certainty—into religious systems.[5]

Conflating the interests of alpha males and low-status males is a sure means for misunderstanding reproductive competition.  Limiting reproductive competition among men to acquiring wives that provide exclusive sexual access, along with tight constraints on the number of wives that a man can acquire, typically favors the reproductive interests of low-status men.  Among Dogon fathers for which data are reported, more than half have more than one wife.[6]  That suggests that many men have no wives.  The Dogon study pays no attention to those men.  Within the specific circumstances of Dogon reproductive competition, one would like to know whether low-status men favor tighter constraints on the number of wives or greater opportunities to engage in extra-pair sex.

Belief systems are more complicated than the religious texts of particular traditions.  Despite greater false paternity in the U.S., religion in the U.S. may well be a stronger normative force than among the Dogon.  The Dogon, after all, have considerable religious diversity and fluidity, and their religious beliefs seem quite responsive to other interests.[7]  The Dogon paternity study found that Islam has no statistically significant effect on false paternity, while Christianity increases false paternity.  That’s not an obvious implication of differences in their sacred texts.  The Dogon study reports that in world religions “the supreme deity or source of moral authority is male.”[8]  That’s an obtusely literal reading of sacred texts.  That claim is deeply offensive to many followers of those religions, especially Muslims, who abhor anthropomorphic representations of God.  Appreciation for anthropology should provide more culturally informed understanding.

Lack of reflective appreciation for the Western system of paternity regulation undermines the credibility of the Dogon paternity study.  Despite regular claims that men have run or still run Western societies, routine genetic paternity testing at childbirth happens neither as a matter of law or common norm.  The U.S. imprisons about 50,000 men on any given day for no choice of their own beyond engaging in consensual sex of reproductive type.  Men face enormous discrimination in child custody and child support awards, yet that discrimination attracts much less concern than the number of female professors in engineering and sciences.  These social facts are not effects of Buddhism, Christianity, Judaism, Hinduism, or Islam.  They have emerged through complex interactions of human social nature, historical dynamics, and status-stratified interests.  The Dogon paternity study’s theoretical perspective utterly fails to explain its authors’ own system of paternity regulation.

[3] Id.,  Abstract, states: “Our findings provide evidence for high paternity certainty in a traditional African population….”  A 1.8% share of genetically false paternity beliefs among father-son pairs is not “high paternity certainty” judged against contemporary technological possibilities.  Routine genetic testing at birth could nearly eliminate false attributions of paternity.  Moreover, paternity is associated with large male investments in time and resources.  Judged against those investments, 1.8% false paternity might well be considered to be quite high.  To appreciate the importance of life context, recognize that a car that killed 1.8% of its drivers would not be considered a high-safety car.

[4] Dogon women who have adopted Christianity or Islam marry within their new religion.  Those women have abandoned use of menstrual huts.  However, the odds of false paternity did not differ statistically significantly between Dogon Muslims and Dogon followers of indigenous beliefs.  The higher false paternity associated with not using a menstrual hut seems to depend on the roughly 6% of the father-son pairs where the father is a Christian.  The small share of Christians, along with the small share of false paternity, imply considerable margin for idiosyncrasies and conflicting statistical results.

[7] Data on the father’s religion are available for 1704 father-son pairs.  Among those pairs, 67% of fathers follow indigenous Dogon beliefs, 28% are Muslims, and 6% are Christians.  The Dogon who are Muslims and Christians have converted from indigenous beliefs since 1940. Regarding Dogon conversion to Islam, the Dogon paternity study states:

To understand the attraction of Islam for young Dogon males, it is useful to recognize that Islam is the dominant religion in the Republic of Mali and neighboring countries such as the Côte d’Ivoire. When young Dogon men go to Bamako or Abidjan to earn wages, they usually convert to Islam and bring their new faith back home. The indigenous religion cannot be practiced in the city because it is tied to worship at nonportable religious shrines and altars in the home village, a factor that disfavors the Dogon religion among urban workers.  More importantly, people tend to trust and cooperate with their coreligionists, and young men who seek friends and job opportunities in the city, yet admit to worshiping their ancestors, are viewed as country bumpkins and treated with skepticism.  The indigenous Dogon religion carries low prestige in urban areas where most of the powerful people are Muslim.

With respect to Dogon Catholics, the study notes “the relaxed way that this religion is practiced compared with official Church dogma in Rome.”  The Dogon paternity study also reports:

The relative superficiality of Catholicism at the study site was captured by one woman who explained why she and her husband became Catholic: “The Catholic missionaries give out watering cans—what do the Protestant missionaries give you? Nothing.” Informants also emphasized that Christians incur fewer expenses on funerals and holidays.

Dogon Christians typically continue to practice polygyny.  See Supplement, p. 2 (references omitted in quotes above). The Dogon paternity study’s title, “Religion as a means to assure paternity,” and its emphasis on religion might best be interpreted as shrewd marketing of the enormous scholarly work that went into the study.