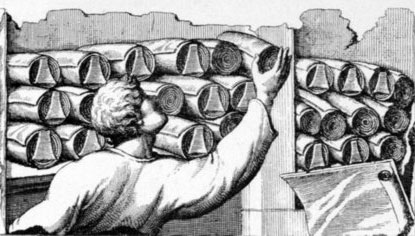 While the size of the ancient library at Alexandria has been exaggerated, books (scrolls) were prevalent among wealthy, educated persons in the ancient world.  Persons valued books as signifying objects as well as for their contents.  Seneca the Younger, writing in Rome nearly 2000 years ago, expressed concern about the prevalence of books:

What is the use of possessing numberless books and libraries, whose titles their owner can hardly read through in a lifetime? A student is over-whelmed by such a mass, not instructed, and it is much better to devote yourself to a few writers than to skim through many. Forty thousand books were burned at Alexandria: some would have praised this library as a most noble memorial of royal wealth, like Titus Livius, who says that it was “a splendid result of the taste and attentive care of the kings.” It had nothing to do with taste or care, but was a piece of learned luxury, nay, not even learned, since they amassed it, not for the sake of learning, but to make a show, like many men who know less about letters than a slave is expected to know, and who uses his books not to help him in his studies but to ornament his dining-room. Let a man, then, obtain as many books as he wants, but none for show.  “It is more respectable,” say you, “to spend one’s money on such books than on vases of Corinthian brass and paintings.” Not so: everything that is carried to excess is wrong. What excuses can you find for a man who is eager to buy bookcases of ivory and citrus wood, to collect the works of unknown or discredited authors, and who sits yawning amid so many thousands of books, whose backs and titles please him more than any other part of them? Thus in the houses of the laziest of men you will see the works of all the orators and historians stacked upon bookshelves reaching right up to the ceiling. At the present day a library has become as necessary an appendage to a house as a hot and cold bath. I would excuse them straightway if they really were carried away by an excessive zeal for literature ; but as it is, these costly works of sacred genius, with all the illustrations that adorn them, are merely bought for display and to serve as wall-furniture. [1]

Seneca addressed wealthy, status-seeking, ancient Romans.  In the ancient world, persons with no money to buy books could consult books in city libraries.  City libraries seem not to have lent books, but at least some ancient libraries encouraged patrons to copy books.  While falling far short of the public access that modern Internet technologies enable, ancient city libraries provided public access to the content of books.

Christian monasteries also amassed libraries and circulated books among monks.  The Rule of Saint Benedict, established early in the sixth century for a community of consecrated Christian men, provided for the circulation of books: “During these days of Lent let all receive books from the library, and let them read them through in order.”[2] A small monastery in which monks resided together and lived similarly could monitor the return of books informally.  A large, diverse group of monks working among a monastery’s surrounding communities required a more formal system for circulating books.  That seems to have been the case for the Augustinians.  The Customs of the Augustinian order instructed the librarian:

He ought also to hand to the brethren the books which they see occasion to use, and to enter on his roll the titles of the books, and the names of those who receive them. These, when required, are bound to give surety for the volumes they receive; nor may they lend them to others, whether known or unknown, without having first obtained permission from the Librarian. Nor ought the Librarian himself to lend books unless he receive a pledge of equal value; and then he ought to enter on his roll the name of the borrower, the title of the book lent, and the pledge taken. The larger and more valuable books he ought not to lend to anyone, known or unknown, without permission of the Prelate [3]

For securing the return of books, the Customs of a Benedictine House in twelfth-century England explicitly favored an economic mechanism over a legal mechanism:

The precentor {librarian} cannot sell, or give away, or pledge any books; nor can he lend any except on deposit of a pledge, of equal or greater value than the book itself. It is safer to fall back on a pledge, than to proceed against an individual. [4]

Secured book lending connects wealth inequalities to inequalities in access to books.  In the ancient world, books probably were rather expensive relative to most persons’ fungible assets.  Many persons probably lacked sufficient resources to provide comparable value pledges for many books.  Persons lacking wealth associated with book possession could not borrow books through secured book-lending.

Factors other than economics can impede book circulation.  A book owner may refuse others economically secure access to a book in an attempt to control the book’s knowledge.  In addition, persons who acquire books for show probably get more satisfaction from showing that they have a book that others don’t.  Refusing to lend a book or refusing to let others read a book can be further points of social distinction.  In 1212, a Christian church council in Paris issued the following order:

We forbid those who belong to a religious Order, to formulate any vow against lending their books to those who are in need of them; seeing that to lend is enumerated among the principal works of mercy.

After careful consideration, let some books be kept in the House for the use of brethren; others, according to the decision of the abbat, be lent to those who are in need of them, the rights of the House being safe-guarded.

From the present date no book is to be retained under pain of incurring a curse {for borrowing it}, and we declare all such curses to be of no effect [5]

Christian scripture makes sharing its message a fundamental imperative.  If Christian monks in Paris in the High Middle Ages needed to be ordered to lend books, present-day libraries betraying their fundamental mission to make knowledge accessible surely is possible.

Librarians, like everyone else, need to be encouraged to keep in practice their best fundamental values.  The British Library has made available in the online, world-wide public domain images of its illuminated manuscripts.  Three cheers for the British Library! 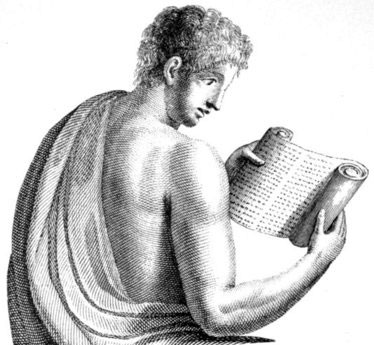 Clark, John Willis. 1901. The care of books; an essay on the development of libraries and their fittings, from the earliest times to the end of the eighteenth century. Cambridge: University Press.