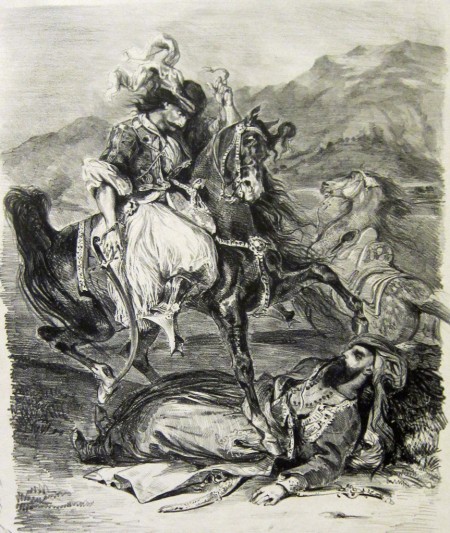 Sefer Shaashuim, a book written in Hebrew in Spain about the year 1200, collected medical information, folk tales, proverbs, and anecdotes from across western Eurasia. Sefer Shaashuim includes a story about how a war between two families started.  According to this story, the devil, frustrated with his inability to cause mischief, was preparing to depart from a place.  Then the devil met a washerwoman.  She declared that she would show him how to create excitement.

The washerwoman used her social networking capabilities to cause a war.  She whispered in the ear of a lady that she served, telling her that her husband was having an affair with another woman.  The lady was greatly upset.  The washerwoman offered to cure the problem.  She told the lady to take a razor and cut off three hairs from her husband’s beard while he was sleeping.  The washerwoman said that she would compound those hairs into a medicine that would cause the lady’s husband to love no woman but her.  Because of her relational jealousy, along with the usual allure of medicine, the lady agreed to secure the hairs for this cure.

The washerwoman then sought out the lady’s husband.  She told him, “with every sign of distress in voice and manner,”  that his wife and her lover were plotting to kill him in his sleep.  Because men are inferior in guile, the husband believed the washerwoman.

The distrust between the lady and her husband led to deadly war.  Here’s what happened:

The husband returned home, and, pretending to fall asleep, watched his wife closely.  He saw her take the razor to cut the three hairs for the remedy, and, thinking that she meant to kill him, he darted up suddenly, wrested the razor from her hands, and slew her with it on the spot.  Soon the news spread, and the wife’s relatives united to avenge her death and kill the husband.  In their turn the relatives of the husband resolved to avenge him, both houses were embroiled, and before the feud was at an end two hundred and twenty lives were sacrificed. [1]

Just as for God, the devil is in small events of everyday life.  According to a book written in Old Spanish in 1253, a hunter found some honey in the woods.  He took the honey into a nearby village to sell it:

Let’s hope that, in different circumstances, peace can emerge from one drop of honey.

[1] Davidson (1914) p. LXVII.  Sefer Shaashuim is transliterated Hebrew that means the Book of Delight.  Hadas & Sherwood (1932) provides an English translation of all the fables in Sefer Shaashuim.

It is built in the Arabian style, decorated with fables and riddles of India, inlaid with the choicest products of Greek science, and illumined with the wisdom and maxims of the Orient.

Davidson (1914) p. p. XXXI. The exact figure for the number of persons killed suggests a historical kernel of the tale. Id. p. LXVII.