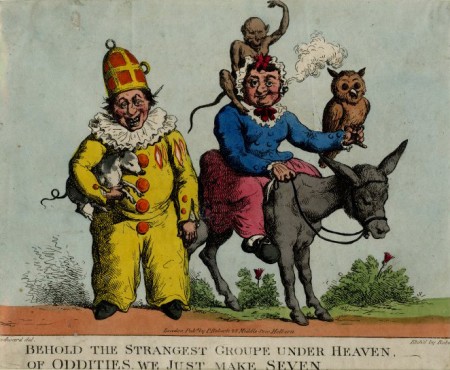 Honor for seven sages (known by name and not much more) has been part of European culture since classical Greece.  By the sixteenth century, medieval Europe had developed an interactive variant of the seven sages.  This variant was known under the catchphrase “we are seven.”  It consisted of a print showing six foolish, incongruous, and stupid persons and animals.  The viewer made up the seventh.

The print above is from London about 1805.  In it “a clown holding a pig stands beside a woman riding astride an ass with a monkey on her shoulders and an owl perched on her left hand.”[1]  Similar iconography exists in a print made in Amsterdam c. 1695.  In ancient Greek iconography, an owl accompanied Athena, the goddess of wisdom.  The interactive print “we are seven” seems to be a parody of the seven sages.[2]  Wisdom wasn’t beyond laughter.

[1] From the image description for hand-colored etching, “Behold the Strangest Groupe under Heaven, of Oddities, we just make Seven,” Print made by: Piercy Roberts; Published by: Piercy Roberts. British Museum, 209, 7032.1.

[2] Some surviving “we are seven” prints from the seventeenth century don’t include the owl, but instead have a formally sophisticated arrangement of three asses and three riders.  See, e.g. “Unser sind Siben / Nous sommes Sept,” Amsterdam, c. 1650.  Another variant is “we are three,” showing two persons/animals.  See, e.g. “Search the World you’ll seldom see – Hansomer Folks than we three” (London, 1775), and “We Three Logerhds {Loggerheads}” (England, c. 1650).  Factors other than a parody of the seven sages evidently also contributed to this class of viewer-included, satirical depictions.