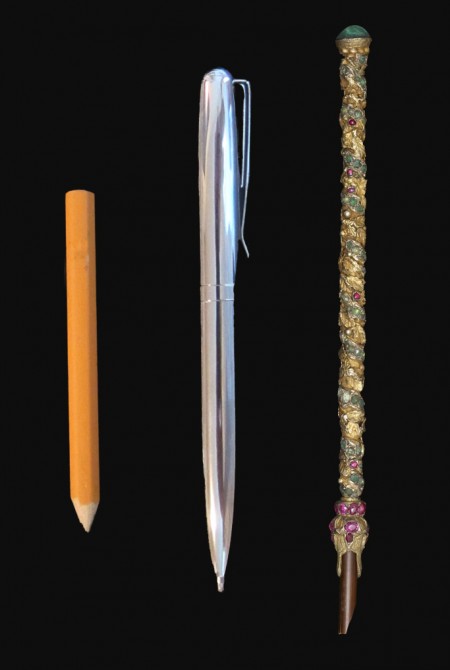 In a society with a high level of literary sophistication and jobs that are not institutionally well-defined, the literary economics of the pen and the sword are more complex.  That was the case in the pre-modern Arabic literary world.  Writing, particularly poetry, was highly valued socially.  Personal status wasn’t anchored in institutional affiliations and could change rapidly.  In Arabic poetry from the ninth century, comparisons of the pen and the sword were an established poetic topos.  Sometimes the pen is mightier than the sword:

The penetrating swords give back their decisive power to a pen that indicates to them where they should strike. [1]

Truly a sword — a hero’s sword — is not more fearful than a secretary’s pen. [2]

In other instances, the sword is mightier than the pen:

Viziers of the realm obey it submissively: it is the habit of the sword to make the pen its servant. [3]

my pens say to me ‘Glory to the sword! There is no glory to the pen.
Write with us always after stroking with it, for we are to the sword as servants!’ [4]

The issue was not just whether a military figure or a scribal official commissioned the poem.  Because the relative might of pen and sword was an established poetic topos, poets played with it to display their learning and skill.  The great poet could figure his honor through both the pen and the sword:

For the horsemen know me, and the night, and the desert, and the sword, and the lance, and the paper and pen [5]

A richly jeweled rifle from eighteenth-century Turkey holds within it a jeweled pen case, a jeweled pen holder, and a reed pen.  In elite status competition, the sword and the pen function similarly.

[4] From poem of al-Mutanabbi, tenth-century Arabic poet, trans. id. p. 346.  I’ve ignored the lineation and replaced “‘writing’ with it (viz. the sword)” with “stroking with it.”

[7] Medieval clerics in Europe wrote Latin poems presenting literary debates about the relative merits of clerics and knights as lovers for young ladies.  In these writings, the clerics typically emerged as the favorite.  See, e.g. from Carmina Burana, “Frigus hinc est horridum…” and “Anni parte flordia…,” trans.  Walsh (1993) pp. 81-4, 101-125; and The Council of Remiremont, available in English translation in Lee (1981).  This poetry seems to have been written for fellow clerics as a relatively unimportant pastime.  The market for Latin poetry in medieval Europe was considerably narrower and less lucrative than the market for poetry in the Islamic world.  Al-Mutanabbi, for instance, earned great wealth writing praise poems for middle-class patrons.  See Ali (2008).

[image] My composition incorporating a penholder (“kalam”) and reed pen from eighteenth-century Turkey.  It is held in the Walters Gallery as Walters Gallery, 51.87

Lee, Reuben Richard. 1981.  A New Edition of “The Council of Remiremont.”  The University of Connecticut. Ph.D. Thesis.