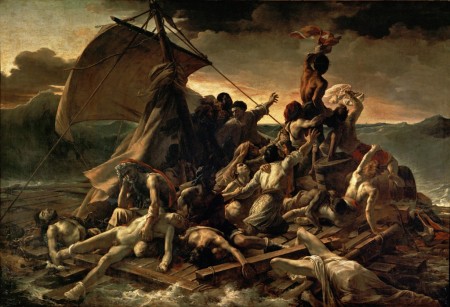 In ancient Rome, shipwreck victims begged for money using pictures.  A Roman satirist who died in the year 62 wrote:

am I going to part with a penny if a shipwreck victim sings a song?  Are you singing with a picture of yourself in a shattered ship on your shoulder?  The person who wants to bend me with his sorry tale will utter a genuine lament, not one concocted overnight.

So break off a portion of your green turf {land in the country} and give it to the penniless man, to stop him wandering around with his picture painted on a sea-blue placard. [1]

Another Roman satirist, who wrote no later than in the second century, described a shipwreck survivor:

satisfied with rags covering his freezing crotch and with scraps of food, while he begs for pennies as a shipwreck survivor and maintains himself by painting a picture of the storm. [2]

These passages attest to the prevalence of pictures in ancient Rome.  A Roman poet who died in 15 BGC complained:

The hand that first painted obscene pictures and set up disgraceful things to view in innocent homes corrupted the unknowing eyes of young girls, and denied them ignorance of sin itself. [3]

Another Roman poet from about the same time pleaded ironically:

Now, goddess, help me now (since the many pictures in your temples witness that you can heal) [4]

Shipwreck beggars may have used pictures to overcome language barriers in cosmopolitan Rome.  In addition to Latin and Greek, Rome contained many uneducated persons who probably understood mainly only local, ethnic languages.  One small picture of a shipwreck probably didn’t support pictorial storytelling.  Such a picture might have identified a beggar cross-linguistically as being particularly worthy of sympathy.

[image] La Balsa de la Medusa (The Raft of the Medusa), Théodore Géricault, 1818-19. In the Louvre, Paris.  Thanks to Wikipedia.