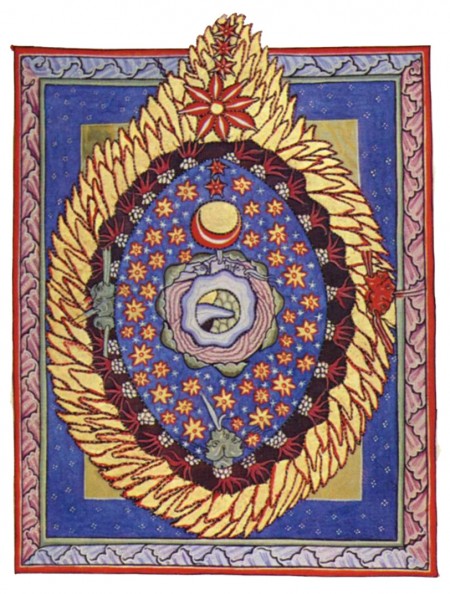 In our benighted age, masculinity is described as toxic, men are labeled as rapists for receiving true love, and doctors of public health discuss masculinity as a pathology to be cured to raise men’s average lifespan to equality with women’s. Hildegard of Bingen, a learned, visionary woman leader in twelfth-century Europe, had a much more enlightened understanding of men’s genitals, semen, and men’s sexuality. In Causae et curae, Hildegard depicted men’s sexuality as awesome and holy in its proper, loving context.[1]

Hildegard was a Christian woman religious with mystical vision and wide learning. She entered a community of nuns as a young girl. She lived in that community for her whole life. The modern stereotype of the nun narrowly enclosed in space and mind describes in reverse Hildegard’s life. She wrote liturgical songs and poems along with theological, botanical, and medicinal texts. She counseled bishops, kings, and emperors. She was famous for her visionary understanding. Within her unfathomable wisdom, she profoundly appreciated men’s sexuality.

the wind that is in their loins is more fiery than windy. It has two tabernacles under its command into which it blows as a pair of bellows. These tabernacles surround the stem of all of the man’s powers, like small buildings put up next to a tower for its defense. For that reason there are two, so that they may more strongly surround the stem, make it firm and hold it and, further, so that they may capture more strongly and aptly the aforementioned wind and attract and emit it in an even manner, like two pairs of bellows blowing jointly into a fire. Thus when they erect the stem in its power, they hold it strongly. In this way the stem blossoms through its offspring.[2]

Wind in medieval thought is connected to the Holy Spirit. A tabernacle is a place of divine presence. Hildegard’s beautiful and poetic description of men’s genitals is grounded in biological reality, but not limited to that reality. Demeaning, repulsive descriptions of men’s genitals occur in medieval literature. Violence against men’s genitals — men’s “junk” — is a staple of modern popular jokes. Hildegard had humane appreciation for masculine biology.[3]

As a ship is endangered by great waves, surging in rivers from strong winds and storms, so that at times it can barely make headway and survive, so too in the storm of pleasure man’s nature can only with difficulty be held in check and restrained.

Fire and water are abstractly contrasting elements. But they are closely connected in Hildegard’s appreciation for men’s sexuality:

When the storm of lust surges in a male, it turns around in him like a mill. For his loins are like a forge which the marrow provides with fire. This forge then pours the fire into the male’s genital area and makes it burn strongly.[4]

Heat and fluid have natural correspondents in men’s sexual biology. Hildegard’s figures of men’s sexuality are both realistic and imaginative.

With the taste for evil the blood of Adam’s children was changed into the poison of semen from which humans’ offspring are propagated.[5]

She described bitter, black bile as originating from Adam’s semen and generating evil. She also described semen as a poisonous foam within men’s bodies.[6] Her description of melancholic men is horrifying:

they do not experience proper love for anyone but are bitter, greedy, foolish, and overflowing with lust. With women they are without restraint like asses. … the embrace of women that they should have in a thoughtful manner is tortuous, hateful and deadly, like that of ravaging wolves. … The wind of sexual pleasure … arrives with a strong, sudden motion, like a wind that suddenly and strongly shakes the entire house. It erects the stem with such tyranny that the stem, which should blossom with blooms, twists vehemently like a viper, with the malice a deadly and murderous viper feels toward its offspring, because the Devil’s suggestion is so strongly at play in the lust of these men, that they would kill a woman in intercourse if they could since there is no love or tenderness in them.[7]

In Hildegard’s thinking, ejaculation is necessary for men to purify their bodies from the accumulating poison of semen. Yet some men excessively seek sexual intercourse with women and engage in such intercourse abusively.

In loving sexual intercourse, poisonous semen becomes life-giving. Hildegard understood conception as the woman’s body warming the man’s poisonous semen and transforming it into the blood of new life. Hildegard declared that conception will occur only if the sexual act is consensual.[8] In reality in the U.S. today, women rape men about as often as men rape women, and some rapes do result in pregnancies. Separating rape from conception seems to have been for Hildegard poetic rhetoric to deny evil acts the power of giving the blessing of new life. Hildegard gave biological significance not just to consent but also to mutual love in sexual intercourse. One-sided love in consensual sexual intercourse produces children who are bitter and lacking in virtue. Mutual love in sexual intercourse produces virtuous children.[9]

In contrast to her figure of poisonous semen, Hildegard also figured semen as a natural blessing. She declared that a man with reproductive strength “produces semen as the sun brings forth light.” Semen in that figure is not poisonous, but life-giving. Another cosmic figure of semen is more elaborate:

In the summertime, as a result of the heat, when fire and air complete their mutual duties in an appropriate mixing behavior, if there is not stormy weather, they sweat the dew out into the mild and clear air. The dew pours out fertility and productivity like semen full of blessings for the fruitful use of the earth.[10]

Just as effects of sexual intercourse are qualified with mutuality and appropriateness, so too is the mixing of fire and air to produce dew. In her Scivias, Hildegard used dew in a simile for the vivification of the infant in the womb:

at the divinely appointed time the infant in the maternal womb receives a spirit, and shows by the movements of its body that it lives, just as the earth opens and brings forth the flowers of its use when the dew falls on it.[11]

Dew in that figure could be understood as moisture rather than seed. Similarly, the Virgin Mary’s flesh rejoiced at the incarnation “just as a blade of grass on which the dew has fall’n / viridity within it to infuse.”[12] Refiguring dew from moisture to seed, Hildegard indicated the natural, universal blessing of men’s sexuality for the world.

[1] Causae et curae has survived in not much more than one manuscript, the Royal Library of Copenhagen’s Ny Kgl. Saml. 90b, probably dating to the mid-13th century. The manuscript contains an explicit attribution to Hildegard of Bingen. She died in 1179. The manuscript includes some material that Hildegard didn’t author. The extent that it includes material that she did author is a matter of scholarly debate. Moulinier & Berndt (2003), a critical edition of the work, argues that Hildegard wrote little of Causae et curae. That’s currently the predominate scholarly opinion. Sweet (2006), Ch. 2, argues that Hildegard wrote most of it. I believe that the material I’m discussing was either written by Hildegard, or by women students of hers. My references to Hildegard can be interpreted more precisely in that sense.

If a man no longer has these two powers {testicles}, either because he has lost them by chance in a natural way or through castration, he has no more manhood and no more masculine storm of passion that erects the member to its full strength. Hence his member cannot be raised to plow the woman like the earth because he is cut free from the storm of his power which should strengthen his member as a means to beget offspring. In the same way, a plow cannot root up the earth when it has no ploughshare.

Causae et curae, from Latin trans. Palmquist, Kulas & Madigan (1994) p. 89. The Romance of the Rose later took up the importance of plowing.

[3] Hildegard recognized the possibility of men ejaculating in their sleep. She understood that men suffer from sexual excitement that doesn’t result in ejaculation. Id. 105b, pp. 54-5. She offered medicine “for the harmful holding back of a semen emission,” “for a swelling in the testicles,” and for sterility. Palmquist, Kulas & Madigan (1994) pp. 171, 160-1.

Boiling with the ardor and heat of lust, human blood emits foam which we call semen. This is like a pot that, placed over a fire, emits foam from the water because of the fire’s fervor.

[image] Hildegard of Bingen, Scivias, Vision I.3, illumination from Meister des Hildegardis-Codex, c. 1165. Thanks to BorgQueen and Wikicommons.

Sweet, Victoria. 2006. Rooted in the earth, rooted in the sky: Hildegard of Bingen and premodern medicine. New York: Routledge.

One thought on “Hildegard of Bingen on men's genitals and semen”