The flower in the meadow falls in the wind, the rain splashes it,
But you, Virginity, remain in the symphonies of the heavenly habitants:
you are the tender flower that will never grow dry.

Along with seventeen or eighteen female solo voices, Hildegard of Bingen in her Ordo Virtutum included one male solo voice: the voice of the devil. The virtue-women and the soul-woman sing lyrical poetry. The devil-man shouts unpoetically. The play poetically figures destroying the “voracious wolf” and binding and laying low the “age-old snake”; it also refers to “man’s wantonness.”[1] Such rhetoric is common in the long and unloving history of disparaging men’s sexuality. 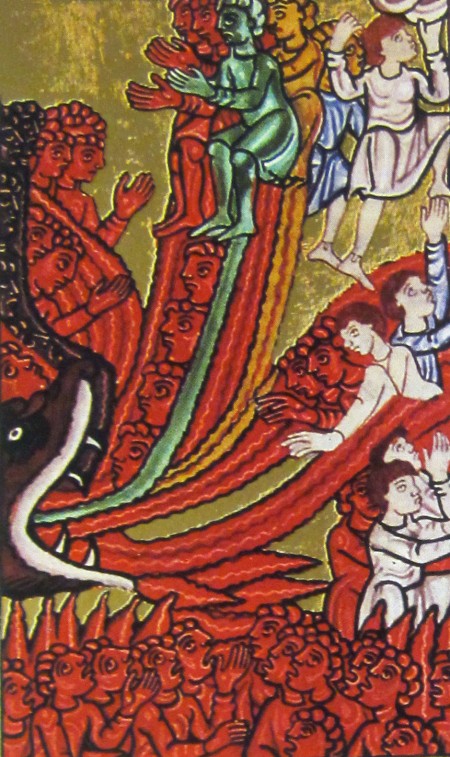 Ordo Virtutum, however, is far more poetically sophisticated than caricaturing women as virtuous and men as demonic. The devil-man shouts his worldly promises. The underlying cause of the soul-woman’s fall is her incompletely formed carnal desire, her impetuousness, and her pride. Treating men as show horses merely to be ridden impetuously and pridefully in a sexual carousel demeans men’s persons. That behavior also tends to dry women’s sexuality to aridity. Storms that produce heavy wind and rain can pass through quickly to leave a scorching desert.

The virtue-women and the soul-woman remembered a man. Like a woman in love, his body encompassed them. He was the greatest of men, but had the lowest of worldly status. He knew what women are in the fullness of their carnal being. He implored God the Father to fulfill his promise:

Now remember that the fullness which was made in the beginning
need not have grown dry,
and that then you resolved
that your eye would never fail
until you saw my body full of buds.
For it wearies me that all my limbs are exposed to mockery:
Father, behold, I am showing you my wounds.

Hildegard of Bingen’s play ends with instruction to the gathered soul-women:

So now, all you women,
bend your knees to the Father,
so that he may reach you his hand. [2]

Creation is restored to greenness and flowering from moist earth when soul-women remember the man’s wounds and humbly wait for the one masculine touch.

One of the voices of the virtue-women is illegible in the manuscripts. If that voice is different from the other virtue-women, then there are eighteen female solo voices (seventeen virtue-women and the soul-woman). On the virtues, see Dabke (2006).

Hildegard wrote Ordo Virtutum no later than 1151. She wrote it in Latin verse with musical notation that has survived. It may have been performed on May 1, 1152, at the consecration of Hildegard’s Rupertsberg convent. Dronke (1994) p. 152.

Latin texts and English translations are available online from Peter Dronke, Christine Jolliffe, and Linda Marie Zaerr (English only).  A variety of song performances are available on YouTube.

In l. 267, Dronke translated omnes homines as “all you people.” However, at l. 55, he translated hominis lasciviam as “man’s wantonness.” The Latin hominis most properly means human being, female and male. Men’s masculinity, however, is often effaced in referring to men, except in derogatory contexts. Ordo Virtutum, l. 55, refers to the devil-man, hence “man’s wantonness” is the best translation in context for hominis lasciviam. Ordo Virtutum was probably performed primarily for women in Hildegard’s Rupertsberg convent. Hence “all you women” seems the most appropriate translation for the concluding address omnes homines.

In l. 264, the phrase plenum gemmarum means both “full of gems/jewels” and “full of buds.” Id. p. 151. I have chosen above the later translation. Id. notes that this image connects to the prologue’s image of a tree blossoming. Hildegard’s Hymn to the Holy Spirit, l. 12, describes wounds transformed by the Holy Spirit into jewels. The association of Christ’s wounds (coagulated blood) with jewels (sphragis imagery) occurs in early Christianity. Dronke (1970) pp. 155-6. Ruodlieb V.99-129 describes making a jewel from a lynx’s urine. Such a claim goes back at least to the first-century in Dioscorides’s De Materia Medica and Pliny’s Natural History.

Virginity, you remain within the royal chamber.
How sweetly you burn in the King’s embraces,
when the Sun blazes through you,
never letting your noble flower fall.

[image] The Tempter, illumination from Hildegard of Bingen, Scivias, Part II.7, Rupertsberg Codex, based on copy made at Hildegard Abbey in Eibingen, 1927-1933, via Böckeler (1954) Plate 18.  All the Scivias illuminations are online here. Campbell (2013) argues strongly that Hildegard oversaw the design of the illuminations.