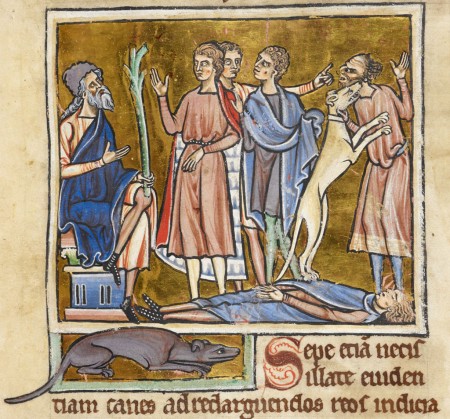 In medieval European literature, a dog was celebrated as man’s best friend. The proverbial cat was commonly associated with the devil.[1] Both dogs and cats were kept within homes as pets. Both had some unfavorable aspects and associations.[2] Overall, dogs had a better medieval reputation as pets than did cats.

Disliked aspects of dogs were bad temper, barking, and attacking. The Distaff Gospels, a French text probably composed in the mid-fifteenth century, explained:

When you hear dogs howling, you must put your fingers in your ears and not listen to them, because they bring bad news … If you don’t want to be attacked or barked at by dogs, by day or night, you should have a piece of good roasted cheese and give it to them while saying: In camo et freno, et cetera {In camo et freno maxillas eorum constringe qui non approximant ad te (with bit and bridle bind fast their jaws who come not near to you)} and they will not disturb you. Lovers should be aware of this trick. [3]

Feeding a dog a piece of bread for the offertory at the following Sunday mass was thought to prevent the dog from becoming bad-tempered. The first brood of puppies from a house dog were to be drowned, for they were sure to grow up to be “vicious and dangerous.”[4] Ancient literature contains a variety of disparaging references to dogs. That in part reflects dogs being non-humans, yet closely associated with humans.[5]

like THE CAT, which at one moment has the sweetest face and softest, smoothest fur on the outside. But pull its tail, then it will show its claws on all four feet and tear your hands to shreds unless you quickly let it go.[7]

If you don’t want to be on your guard against your male cat, you must cut a piece, the size of your palm, out of its tail because, once it is four years old, it thinks night and day about how to strangle its master.[8]

At the gates of the Greco-Roman underworld was the multi-headed dog Cerberus. Unlike dogs, cats tend to lurk and spring unsuspectingly. That may have encouraged the medieval association of cats, rather than dogs, with the devil.

Dogs were working animals and beloved pets in medieval Europe. Dogs were valued for hunting, herding, and guarding. Long before the Middle Ages, stories told of dogs loyalty and devotion to their owners. The eleventh-century Latin romance parody Ruodlieb included an account of a noble hunting dog that sensed and attacked a person who stole from his master.[9] Another story originating in ancient India told of a dog that saved a baby from a snake. The dog was wrongly killed through mistaken belief that he had killed the baby. In thirteenth-century Europe, such a dog was venerated as a martyr-saint.[10] Small dogs were the “medieval pet par excellence.”[11] They were given names, sometimes overfed with fine food, and loved as loyal companions.

The cat is described as his light and dearest companion, who is always around day and night. Even when the owner {Orsini} is called to supper, the cat wanted to give “a thousand caresses” and coaxed tidbits from the dishes. The cat is described as constantly following him whenever he steps into the hall and is ready to lie down in front of the owner whenever it detects that he is melancholy. … The cat follows him into his study, prowling and pawing around his books and letters. It thus becomes the perfect scholar’s companion, rousing him from unhappy thoughts, and sitting on his desk and leaping over his books to provide amusement. … The cat jumps into his lap with gentle paws, climbs up on his shoulders, licks his face, purrs to the delight of his owner’s ears and playfully bites his hand.[12]

Orsini’s epitaph applies equally well to a scholar and cat in the medieval period. Suggesting a context of animosity toward intrusive and jealous cats, the Distaff Gospels advised:

Young men should not hate cats because they are the cause of great happiness and can assist in achieving success in matters of love with young and charming ladies. [13]

Cats were thought to protect their caretakers from bears, cows, and husbands who turn into goblins at night. The Distaff Gospels counseled:

If you have a good cat and you don’t want to lose it, you must rub its nose and four legs with butter for three days, and it will never leave the house.

A specific cat that purred, played, and pleased could easily overcome the abstract association of cats with the devil.

While the relative merits of dogs and cats today is a matter of bitter controversy, dogs were generally regarded as superior in medieval Europe. The great twelfth-century scholar, writer, and public figure Hildegard of Bingen praised the loyalty and perceptiveness of dogs. She also declared that the Devil hates dogs for their loyalty. Hildegard described cats as disloyal and remaining with persons only for food.[14] The fifteenth-century Distaff Gospels offered a more extreme evaluation of dogs versus cats:

Women’s superiority to men is now well-accepted in authoritative literature. When women today acknowledge the superiority of dogs, men will be better loved. 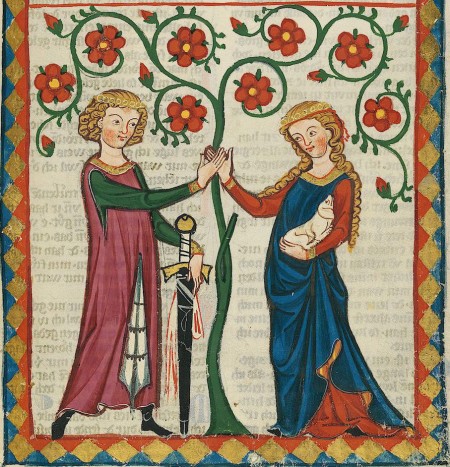 [5] Menache (1997) reviews disparaging references to dogs in ancient literature. Id., p. 1. claims, “there is clear opposition to dogs on the part of institutionalized religion.” Perhaps eventually recognizing that claim to be untenable, Menarche (1997) added the ad hoc claim:

When Western society freed itself of the protective bounds of ecclesiastical repression, the canine species was liberated from its religious image and the negative connotations inferred thereby.

Id. p. 39.  The “long journey toward humanism and a more harmonious perception of the universe” allegedly was sufficient completed in the thirteenth-century so that the Christian church no longer opposed dogs. Id. pp. 38-9. That’s ludicrous.

Human religions tend to privilege humans. Dogs, the earliest domesticated animals, serve as a salient figure for non-humans. Calling a person a dog thus serves as disparaging as non-human or sub-human. See, e.g., Revelations 22:15. Institutionalized religions don’t, however, particularly oppose dogs relative to other animals such as pigs and asses. The story of the Seven Sleepers of Ephesus / Companions of the Cave, celebrated in early Christian and Islamic literature, has a dog as the loyal companion to religious heroes. Abbot Thierry of St. Trond’s early twelfth-century Latin poem, “Weep, Dogs” laments the death of Pitulus, a “beloved dog.” Ziolkowski (1993) pp. 272-3. The influential, twelfth-century abbess Hildegard of Bingen praised dogs as pets. In medieval Europe, clerics commonly kept dogs as pets. Walker-Meikle (2012) pp. 3, 8.

Menache (1998) documents literary evidence of the long, mutually beneficial association of dogs and human beings. That association encompasses societies in which monotheistic religions have predominated.