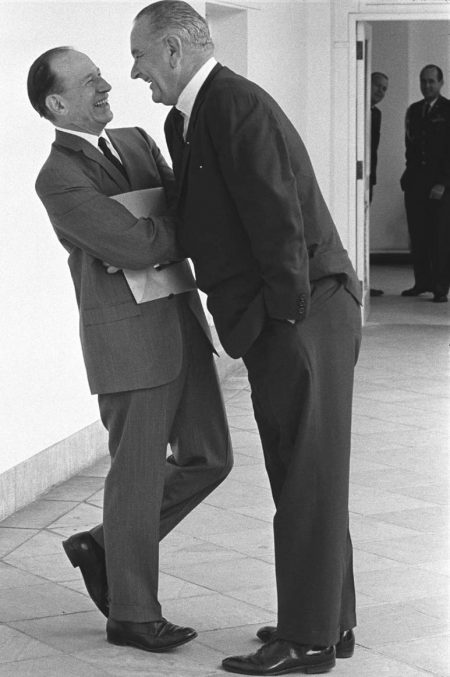 The Great Society that Lyndon Johnson began to build has been demolished. Johnson was a towering leader in the U.S. Senate and then President of the U.S. He was proud of the size of his penis, which he nicknamed “Jumbo.” Johnson would manipulate his genitals during meetings and urinate in front of female and male subordinates in the parking lot of the U.S. Capitol. Holding his penis and turning to a male colleague in the bathroom, Johnson said, “Have you ever seen anything as big as this?” That colleague never complained of Johnson sexually harassing him. Women and men will never again see a Johnson like that Johnson.

Power is the problem. “Power is the ultimate aphrodisiac,” Henry Kissinger knowingly explained. When President Bill Clinton and White House intern Monica Lewinsky engaged in non-heteronormative sex in the Oval Office complex, the power imbalance between the two undoubtedly helped to make the cigar more thrilling. The powers that rule have ruled that a power imbalance makes sex illicit. Ordinary persons can do nothing against that powerful ruling. Men are now impotent; women, distraught.

Hollywood and other fantasy producers no longer offer an escape. Long ago, a young actress from Algeria went to study in Paris:

She got to know a French producer as old as her father. Very rich and very influential. Married and with children older than she was. He fell in love with her. Her skin was brown and smooth and she was passionate. He went crazy over her. She drove him insane. He promised he would produce a blockbuster with her as the heroine, and he kept his word. You know what this generation’s like, everything all in a hurry. She wanted to be a famous actress, and he was obsessed with her youth. He would follow her to Tunis whenever she went there to visit her family.

Their relationship ended, not like some prominent men’s careers have ended recently, but in a more humane way:

He died. They were together. He was making love to her. He died on top of her. Someone asked if he’d died before he’d come or after. No one knew the answer.

Natural death is no longer a fitting end. Survivor women who suffered sex with men must be made into heroines. Their lovers must be public flayed. Then they must be killed in ritual sacrifice to the idol of gender power equality and the structural injustice of top and bottom. Men must be wary to remain alive and sane.

The Thinker has been exiled from respected public discourse. Some still longingly remember his presence:

I was confident that the Thinker would appear before me one day at a sudden turning, and he would say, like the first time, “It grabs me by the throat.” He would ask me about my honey, as though he had left me the day before, and I would reply that he should look for the answer for himself; that it was up to him to stretch out his hand and put it between my thighs and taste. “The proof of the sweetness of the honey is the honey itself,” says Ibn Arabi. I used to say it in front of him, and then he became the one who would repeat it, to teach me what I already knew.

Now anyone who says that some women might want certain men to reach out and grab the honey between their thighs is publicly classed as a sexual predator in authoritative news reports. Honey has turned to sorrel.

The Great Society has been demolished. Yet few dare speak or write of what’s happening. American society isn’t headed toward being made great again.

On Johnson calling his penis “Jumbo,” urinating in the Capitol Hill parking lot, manipulating his genitals, and proudly displaying the size of his penis, Caro (2003) p. 121.

Henry Kissinger stated with respect to his sexual affairs, “Power is the ultimate aphrodisiac.” Quoted in the The New York Times, 28 October 1973.

The most authoritative source for documentation on Monica Lewinsky and Bill Clinton’s relationship is the Starr Report. Here’s a review of reporting on the Lewinsky / Clinton story.

The account of the actress’s affair is from Nu’aymī (2009) p. 66. On the woman encouraging a man to reach out and put his hand onto her vagina, id. p. 140. Ibn Arabi was a twelfth-century Islamic scholar, Sufi mystic, philosopher, and poet. Ibn Arabi was educated in Seville. He traveled and lived throughout the Islamic world of the twelfth century.

[image] Photo (slightly cropped) of President Lyndon B. Johnson socializing with Abe Fortas a day after nominating him to the Supreme Court. Photo made on July 29, 1965. Johnson’s body language shows his capabilities for providing the “Johnson treatment.” LBJ Library photo by Yoichi Okamoto. Photo serial number A966-16. Thanks to the LBJ Library for preserving this photo in the public domain.

Caro, Robert A. 2003. Master of the Senate: the years of Lyndon Johnson. New York: Vintage Books.