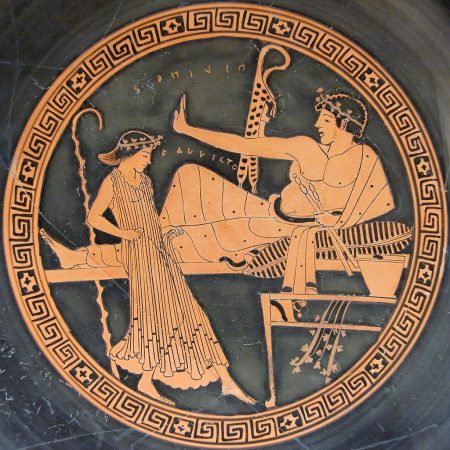 Throughout history, women commonly have been socially more powerful than men. In addition, men’s sexuality typically has been devalued. Men today with good reason are extremely wary of expressing sexual interest in women. Even elite men in Baghdad in the early Abbasid caliphate were cautious in engaging with singing slave girls professionally associated with sexual affairs.

The trade slogans also indicated that men must pay women for sex and meekly accept women wronging them:

Reversing the more inclusive ancient wisdom, “Whoever is not against us is for us,” the trade slogan of one singing slave girl insisted, “He who is not with us, is against us.” All-powerful caliphs in the ancient Islamic world were subordinate to their slave girls. How can any ordinary man today hope to have a gender-egalitarian relationship with a women given prevailing, oppressive gynocentrism?

“Is it not a wonder that you and I are together in one house, yet you are neither intimate nor do you converse?”

Men must use their reason to adapt to gynocentric oppression. Deprived of reproductive rights and commonly forced into financial fatherhood, men in the ancient Greek world adjusted their sexual behavior to cope with the problem. Socially pressured into providing for women and putting meat on the table, husbands in ancient Rome responded by arranging home-based businesses for wives reluctant to work outside the home. Human reason is beautiful and invincible. Now more than ever, men must rely on reason.

All the quotes above, with one exception, are trade slogans of singing slave girls (qiyān) in Baghdad in the early Abbasid era. The trade slogans are given in al-Ghuzūlī, Matāli‘ al-budūr i, 278, from Arabic trans. Caswell (2011) pp. 278-9, with some non-substantial changes for readability. Id. also provides the name of the singing slave girl associated with the each trade slogan and where she displayed the slogan.

The phrase “Whoever is not against us is for us,” which a slave girl’s trade slogan reversed, is a saying of Jesus recorded in Mark 9:40. See also Luke 9:50.

One slave girl’s trade slogan indirectly indicates that some men grew weary of being sexual subordinate to slave girls: “He who desires us shall not tire of us.”

[image] A reclining young man, in the presence of a young woman dancer, indicates refusal and declares, “Philip is the most beautiful.” Tondo from an Attic red-figured kylix, ca. 490-480 BC. From Vulci. Held in the British Museum, acc. # GR 1848.6-19.7 (Cat. Vases E 68). Thanks to Jastrow and Wikimedia Commons.