Blaise, a Christian bishop in central Anatolia probably during the fourth century, reportedly cured a boy who had a fishbone stuck in his throat.  The cure occurred while Blaise was being led to prison and subsequent martyrdom.  Blaise became a highly popular saint widely celebrated for curing illnesses of the throat.[1] 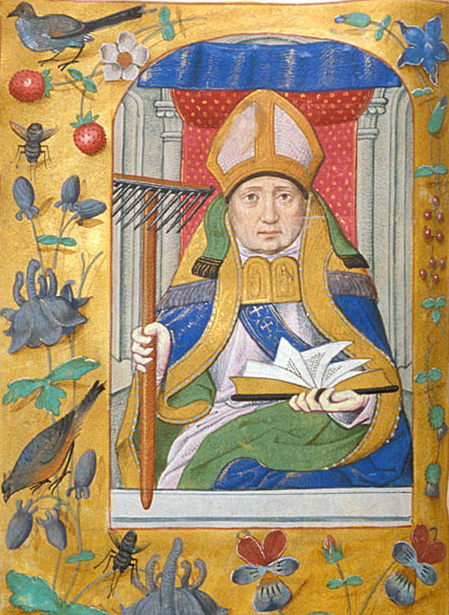 Contrasting vibrantly with the story of Saint Blaise is a thirteenth-century Old French fabliau, Le vilain mire.  In this fabliau, a king’s daughter was gravely ill from a fishbone stuck in her throat.  A peasant, mistakenly regarded as a better doctor than Hippocrates, promised to cure the girl in order to get royal officials to stop beating him.[2]

The peasant treated the king’s daughter with his laughable beastliness.  The peasant shrewdly reasoned:

If she’d just laugh — I know I’m right —
with all her force and all her might,
it would be coughed up and discharged,
because the bone’s not deeply lodged. [3]

The peasant takes off all his clothes —
even his britches — then he goes
and sits beside the fire and scratches
and roasts himself while the girl watches.
He’d long nails and thick hide; I’m sure
any man twixt here and Saumur
who scratching of that sort received
would find his itching well relieved. [4]

The peasant doctor did not become a celebrated saint.  But he did receive a large income from the king, never needed to farm again, and went on to live happily with his wife.[5]

[5] The peasant later cured a crowd of sick persons who had gathered at the royal court.  The peasant stated that he would first sacrifice one sick person in a fire, then use the immolated person’s ashes to cure the rest.  Seeking a sick person to immolate, the peasant found no one willing to admit to being sick.  All left claiming that they felt well.  The Sermons of Jacques de Vitry (c. 1200) includes a similar account of a priest’s cure of a crowd of sick persons.  Clark (1990) no. 254, summarized pp.  241-2.  The Sermons of Jacques de Vitry also includes an account of wife who falsely described her husband as a great physician in order to get royal officials to beat him.  Id. no. 237, summarized pp.  231-2.  The sermons don’t include the unerotic-erotic cure of a girl with a fishbone stuck in her throat.