A farmer went to market and bought two thousand sheep. Returning home, he found his way blocked by a flood-swollen river. Along the shore was a small boat that could carry only two sheep across at a time. The farmer put two sheep into the boat and crossed over. The farmer needed to do that a thousand times in order to get all his sheep home.

I’ll entertain your grace by telling stories the whole time, unless you want to dismount and stretch out for a little sleep, here on the green grass, the way knights errant do, so you can be better rested when day comes, and more fit for this unheard-of adventure that awaits you. [3]

Am I, by any chance, one of those knights who look for rest when danger faces them? You sleep, since that’s what you were born for, or do whatever you want to, and I will do what best suits me.

Sancho began to tell a long-winded variant of the sheep story in Disciplina Clericalis. In Sancho’s version, a shepherd had three hundred goats that he had to transport across a river. The shepherd had to take the goats across one by one. Sancho explained:

you’d better keep track of how many goats the shepherd carries across, your grace, because if we forget a single one that will be the end of the story, and it won’t be possible to tell another word.

you’ve told one of the most novel tales, or stories, or histories, anyone in the world has ever thought of, and the way you told it, and then ended it, is something never to be seen, and never ever seen, in the course of a lifetime, though I expected nothing less from your remarkable powers of reasoning. On the other hand, I’m not surprised, for conceivably this banging, which has never stopped, has troubled your brain.

That’s layers of nonsense built upon ridiculousness. Disciplina Clericalis was a highly popular work across Europe. Spanish readers most likely knew the tale of counting sheep. About five centuries after Disciplina Clericalis was written, the counting-sheep story had a novel ending in Don Quixote. That novel ending was in counting goat-sheep not being allowed to produce sleep. 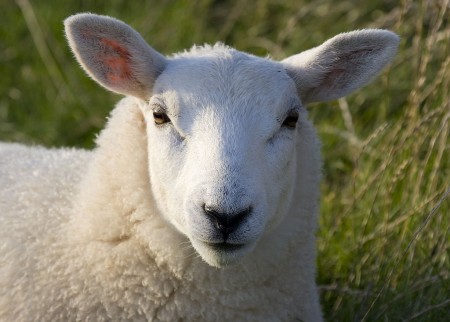 The animating spirit of Don Quixote’s evaluation of counting sheep continues in recent scientific work and associated story-telling. On January 24, 2002, news sources around the world reported news about counting sheep. In Britain, a story in The Guardian declared in its headline: “Trouble Sleeping? Don’t Count on Sheep.” The story reported:

New Scientist reports today that Allison Harvey, a cognitive psychologist at Oxford University, tested that classic recipe for numbing thought and quelling anxiety: counting sheep. She and a colleague divided 50 volunteer insomniacs into three groups, proposed a strategy for each and monitored the rates at which eyelids closed and breathing became regular.

One group was asked to concentrate on a distraction such as counting Southdown ewes in a field, or Merino lambs hopping over a stile. One group was left to its own devices. And one was asked to focus on a tranquil and relaxing suite of thoughts, such as a waterfall, or being on holiday.

Those who imagined torpid afternoons in the south of France, or lazy twilights in the Tyrol, went to sleep on average 20 minutes earlier than they would normally do on nights when they were not concentrating on faraway places. The sheep counters – and the ones who just lay there, wishing they could nod off – actually stayed awake for longer than their normal ration of restlessness.

The story in BBC News was titled “Sheep counting is tired technique.” That story reported:

The idea that you can nod off while imagining the woolly animals jumping through a hedge has been around for years, but scientists who have tested it on volunteers say other strategies are likely to be more effective.

Harvey and a colleague took 50 insomniacs and asked them to use different techniques to get off to sleep.

Some were told to count those sheep; others to imagine a relaxing scene; and a third group was left to its own devices.

On average, those picturing a calming scene fell asleep more than 20 minutes earlier than on nights they did not try the technique. But both the sheep-counters and the controls took slightly longer than normal to fall asleep on the nights of the experiment. “Counting sheep is just too mundane to effectively keep worries away,” Harvey said.

Harvey and her colleague Suzanna Payne asked 50 insomniacs to try different distraction techniques on certain nights, to see which helped them fall asleep more quickly. One group conjured up a tranquil and relaxing scene such as a waterfall or being on holiday, while a second were asked to think of a distraction such as counting sheep. A third group were left to their own devices.

On average, those picturing a relaxing scene fell asleep over 20 minutes earlier than on nights they didn’t try the technique. But both the sheep-counters and the controls took slightly longer than normal to fall asleep on the nights of the experiment. “Counting sheep is just too mundane to effectively keep worries away,” says Harvey.

The “general distraction” group were told that during the pre-sleep period they should simply distract from thoughts, worries and concerns. No guidance was given as to a specific strategy that should be used to distract. …

The “general distraction” group is the group that the news sources reported as “sheep-counters.” Yet only two of the fourteen tested insomniacs in that group counted, and those two did not necessarily count sheep. If you literally believed what was reported in the scientific news articles in The Guardian, BBC News, and the New Scientist, you might as well believe what is written in medieval chivalric romances.[5]

Medieval history is more meaningful than contemporary science journalism. Counting sheep for falling asleep has the authority of being, for at least a millennium, a widely recognized human practice. If you’re having trouble falling asleep, try counting sheep. That would be low-cost scientific work potentially offering significant results for you.

9 thoughts on “ancient origin of counting sheep to fall asleep”