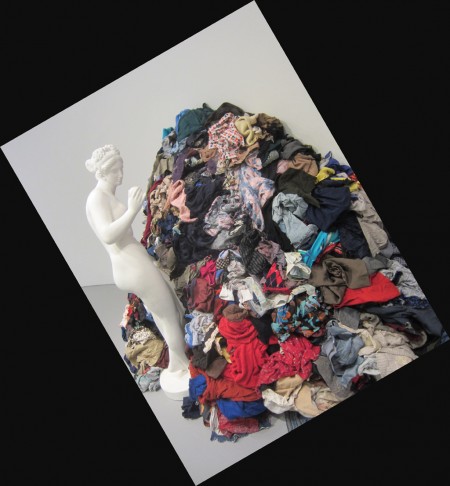 While crossing boundaries / being transgressive has become intellectually fashionable, the thirteenth-century French fabliau Trubert obliterated boundaries to an extent that has seldom been equaled.  Trubert is many times longer than other fabliaux, and its plot, far more complex.  It presents a broad, unmotivated range of linguistic tone, texture, and diction.[1]  Fabliaux are less moralistic than Aesopian fables, but fabliaux still uphold basic value of justice and preference for the lowly.  Trubert, in contast, presents a sociopathic trickster carrying out random acts of violence.

With a yellow herb, Trubert colored his face and throat, and all over his hands; he changed his figure to such a point that no one could say openly that it was him when he had finished. [3]

Skin coloring isn’t an effective disguise.  The claim that “no one could say openly that it was him” seems almost like a moral-racial constraint.  By the late nineteenth-century, anthropologist were describing a “yellow” Asiatic race.  Persons in thirteenth-century France apparently associated persons from central Asia (“Orientals”) with yellow skin.  Immediately after describing the racial disguise, the narrator interjects:

Why have I created for you this long description?  He marvelously disguised himself, and then immediately headed toward the castle where the duke was living.

Trubert’s racial disguise contributes nothing directly to the narrative.  Why did the narrator create it?

Other extraneous Trubert text indicate that its parody of an Oriental physician was well thought-out.  Trubert disguised as the Oriental physician collects, with a beautiful white cloth, festering dog feces.  He places the dog feces in a container and then in a long, thin sack.[4]  Such equipment he has seen other physicians carrying.  That’s entirely plausible for the sack.  It’s also plausible for animal feces.  Ancient Greek medicine, which was highly esteemed in southwest Eurasia, used animal feces as medicine.

The Trubert fabliau invokes both folk medicine and professional medicine.  Trubert walks through town barking that he has an ointment to cure all illnesses.  He proclaims that no one, no matter how close to death, can fail to be healed within two months with two or three applications of his ointment.  Trubert thus acts like an itinerant folk physician.  However, when a steward, suspicious of medical fraud, warily approaches Trubert, Trubert declares that he seeks neither gold nor money for healing persons.

The steward takes Trubert into the realm of professional physicians.  The steward’s lord is a duke suffering from a serious beating.  The duke complains that all the other doctors have examined his urine and palpitated his wounds, but have not said anything truthful.  Examining urine was a central professional practice among physicians schooled in ancient Greek medicine.  Trubert declares that his medicine is far better than the medicine of any other doctor.  Trubert thus places himself in competition with learned medical practice.

Here’s a good man.  From here to Rome, there isn’t a better physician.  He will heal me right away, I am persuaded; in contrast, those other physicians there know nothing

Trubert explains to the Lady of the house:

Lady, I have an ointment.  There is none as good from here to the Orient

Trubert being disguised as an Oriental physician supports extravagant claims to medical expertise.  In ancient Rome the leading physicians were commonly culturally Greek persons from the east.[5]  That geography of medical expertise apparently was still understood in thirteenth-century France.

Trubert enacts transgressive figures like those celebrated in today’s leading literature and art.  Trubert has the Duke completely disrobe.  Trubert binds the nude duke into a basket like a piece of meat on a butcher’s block.  Then he anoints the duke’s whole body with the dog-feces ointment.  The duke declares:

Trubert re-assures the duke, and then proceeds to give him a severe beating with a stick.  He tells the duke that the purpose of the beating is to get the ointment to penetrate his body.  After prolonged, vicious physical abuse of the duke, Trubert reveals his name.  He is Trubert, the person who caused the wounds for which the duke originally sought a doctor.  Trubert leaves the naked, bound, dog-shit-covered, beaten duke in the room, locks the door, and leaves.

Before leaving the house, Trubert meets the duke’s wife.  Trubert has duped her into ignoring the duke’s cries of pain and instructed her not to allow anyone to enter the room.  Trubert re-assures her about her husbands howls of pain.  She, convinced, declares, “Against powerful sickness, one needs powerful medicine!”  The fabliau Trubert may have been intended to be just such medicine.[6]

[1] Lacy (2008) p. 83.  On Trubert and transgression in a conventional, cultic academic style, see Burrows (2006).  Trubert within its text describes itself as a fabliau and declares its author is Douin, who came to be known as Douin de Lavesne.  Trubert is thought to have been written about 1270.  No other works are attributed to Douin de Lavesne, and nothing more is known about him.

[2] For example, the lady leech in La Saineresse, the super-hero count in La Dame Escoilliee, and the kidnapped peasant in the Le Vilain Mire.  In the fabliau Do maignien qui foti la dame, a maid sees her lady naked, bending over the bath.  The maid worriedly tells her that her innards are falling out.  Hearing of the problem, a knowledgeable peasant pretends to be a doctor and treats her by pushing her “innards” (vagina) in with his penis.

[4] Shortly thereafter, Trubert purchased twenty containers and apparently put them, empty, into his sack.  The twenty empty containers have no relevance to the plot of the story.  They seem to emphasize Trubert’s pretense of medical expertise.

[6] The United Nations’ recent report, Why Do Some Men Use Violence Against Women and How Can We Prevent It?, perhaps can function similarly.

[image] My photographic composition of Michelangelo Pistioletto, 1967, Venus of the Rags, on display at the Hirshhorn Gallery, Washington, DC.