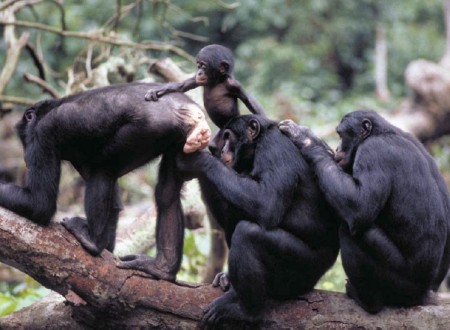 A view across primates provides insights into making a peaceful, egalitarian society. In the U.S., about four times as many men die from violence as do women. That’s about the same sex ratio for violent deaths among adult chimpanzees.[1] The overall effect of sex-biased violence, mortality, and social expulsion in chimpanzees produces chimpanzee social groups that have 90% more adult females than adult males.[2] Bonobo, in contrast, hardly ever engage in violent killings. Bonobo groups have closer to equal adult sex ratios with 50% more adult females than adult males.[3] Study of bonobo suggests that adult females are key to promoting a peaceful, egalitarian society.

When {bonobo} males begin agonistic interactions, their mothers sometimes join in support of their sons. …in December, {Sen, a mother} began to attack the sons of {Kame, another mother}, probably to support {Ten, her adult son}. On December 14, in a big fight involving many individuals, {Sen} and {Ibo, adult son of Kame} severely fought while grasping each other, and {Ibo} fled from {Sen}. I first observed fighting between {Kame} and {Sen} on December 19.  They had a hand-to-hand fight while rolling on the ground, and finally, {Sen} held {Kame} down. After {Sen} left the place, {Kame} continued to scream.  After this incidence, fights between {Sen} and {Kame} occurred several times, but {Kame} never defeated {Sen}.[5]

In addition to social status, the presence of mothers also helps their adult sons to get copulation opportunities.[6]  Maternal support for adult sons seems to be a central element of the relatively egalitarian sex opportunities for adult male bonobo and relatively peaceful bonobo society.

Bonobo adult females being relatively receptive to sex with males also contributes to peaceful society. Adult female bonobo are sexually receptive (in estrus) for a much large share of their normal adult lifespan than are adult female chimpanzee. That greatly increases males’ opportunities for copulations.[7] In chimpanzee society, alpha males highly disproportionately copulate with females. The sexual skew is much less severe among bonobo males who have more numerous sexual opportunities.[8] Primate societies that provide all males with plentiful sexual opportunities are more egalitarian and more peaceful.

Females determine the nature of primate society. With human politics failing to advance the welfare of men, caring women should look to other primates. If nothing more human can be done, woman can strive to emulate bonobo females for the sake of men.

[1] Across 18 chimpanzee communities studied for decades, intergroup killings (observed and inferred) of weaned (adult) victims comprised 23 male victims and 6 female victims.  The corresponding numbers for intragroup killings were 9 male victims and 2 female victims. Tabulated from Wilson et al. (2014) Extended Data Tables 1 & 3. Captive chimpanzees re-introduced into the wild suffer less harm if they are female. Formerly captive females have been successfully accepted into wild groups, but males have not. Wild chimpanzees frequently injure severely re-introduced captive male chimpanzees. Among such males, 40-50% of them would have died from the conspecific attacks if they had not received veterinary intervention. Goossens et al. (2005).

[2] See chimpanzee and bonobo sex ratio data table. Furuichi (2011) p. 135, Table 1, gives the adult sex ratio (males/females) for chimpanzees at Mahale and Gombe as 0.27 and 0.51, respectively. These are unusually skewed sex ratios.  The absolute level of mortality is much lower among humans than among chimpanzees.  However, among persons ages 15 to 59 across the world, median mortality probability is 64% higher for men than for women. That fundamental gender inequality has been largely ignored in discussions of gender and development.

[3] See chimpanzee and bonobo sex ratio data table.  Furuichi (2011) p. 135, Table 1, shows the adult sex ratio (males/females) for bonobo at Wamba is 0.75. That’s an unusually nearly equal sex ratio. According to a popular authority, bonobo are a “female-centered, egalitarian primate species that substitutes sex for aggression.” De Waal & Lanting (1997) p. 4. Id. includes a section entitled, “Who’s the Boss?” In that section, primatologist Barbara Fruth declares, “Adult females (bonobo) are dominant in every possible way. Even younger females sometimes dominate adult males.” Id. p. 79. Cf. Furuichi (2011) pp. 136-7. In discussing bonobo as an eqalitarian primate species, de Waal queries, “Could it be that cultural sensitivities surrounding the relation between men and women in our own societies led to a period of denial of this unique arrangement in one of our closest relatives?” De Waal & Lanting (1997) pp. 76, 79-80. Those sorts of cultural sensitivities continue to suppress recognition of the social construction of male dominance and the reality of gynocentrism across primates.

Strier, Karen B., Chaves, Paulo B., Mendes, Sérgio L., Fagundes, Valéria, and Di Fiore, Anthony.. 2011. “Low paternity skew and the influence of maternal kin in an egalitarian, patrilocal primate.” Proceedings of the National Academy of Sciences of the United States of America. 108 (47): 18915-9.