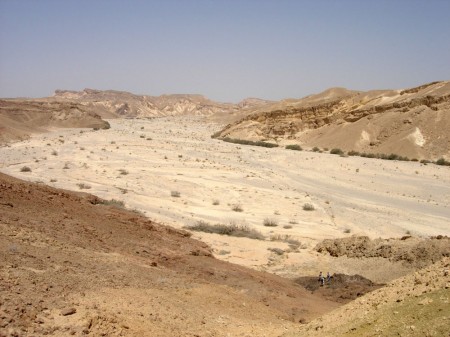 Crossing the river Jordan is an important motif in the Life of Mary of Egypt. In Jewish history, the Jewish people, after wondering for 40 years in the desert, crossed the river Jordan into the promised land. In the Life of Mary of Egypt, the monk Zosimas lived in Palestine. That can be meaningfully interpreted as the promised land. When Zosimas was 53 years old, he was led by an unnamed one to a monastery in Palestine along the bank of the Jordan. In accordance with the calendar of Lent in Eastern Christianity, the monks of that monastery crossed the Jordon for Pure Monday and returned 40 days later for Palm Sunday. The monks thus re-enacted the Jews’ purification in the desert before returning to the promised land to celebrate Holy Week. Zosimas joined the monks in that symbol-laden ritual.

Zosimas and Mary of Egypt encountered each other across a dry riverbed (a wadi). Mary of Egypt initially fled from Zosimas. He chased her. Zosimas came within calling distance, but could chase no more. Mary of Egypt was then across the wadi from him. With Zosimas wailing laments, Mary of Egypt from the other bank of the wadi turned and addressed him. Zosimas then appeared at her feet without explicitly crossing the wadi. Zosimas’ encounter with Mary of Egypt was a mystical, extra-historical experience.

Mary of Egypt recounted her life to Zosimas with symbolic numbers. When Mary was 12 years old, she left her parents and went to live a licentious life in Alexandria. The number 12 represents both the number of tribes of Israel and the number of original apostles of Jesus. Mary leaving her parents at age 12 resonates with personal, salvation-historical, and Christian betrayal. Mary lived a licentious life in Alexandrian for more than 17 years. Then, with the help of an icon of Mary, the Mother of God, she repented. That would have been when she was about 30. The number 30 incorporates 3, as in the triune God, and is traditionally understood to be the age at which Jesus started his public ministry. Mary saw the holy cross at the 3rd hour of the day. She then took 3 loaves of bread with her as she began her spiritual life in the desert. For 17 years in the desert she struggled with sensual desires. Those 17 years corresponding to undoing the 17 years (and more) she spent in sexual promiscuity. Mary tells Zosimas that she spent a total of 47 years in the desert. That’s 17 years plus 30 years. Through that time, she had been transformed into a most holy woman.[1]

Zosimas’ second encounter with Mary of Egypt communicated clearly her holiness. Mary had instructed Zosimas to wait with Eucharist for her on the bank of the Jordan in the promised land. Zosimas did so. Mary came to him by walking across the water of the Jordan.[2]

Zosimas’ third encounter with Mary of Egypt associated her with the passion and death of Jesus. After journeying again 20 days in the desert, Zosimas found Mary at the wadi:

{he} saw the blessed woman lying dead on on its eastern slope, her hands folded in the proper manner and her body lying in such a way that she was facing toward the east. [3]

The Gospel of Matthew promised:

For as the lightning comes from the east and flashes as far as the west, so will be the coming of the Son of Man. [4]

Mary, like Christian churches, was oriented to the east to see the second coming of Christ. Writing in the sand next to Mary’s head explained:

I died  … on the very night of the Passion of our Savior, after I received the holy Last Supper. [5]

Mary had died with Christ after miraculously traversing in one hour what for Zosimas had been a 20-day journey. Just as a lion had helped Saint Antony bury Saint Paul the First Hermit, a lion helped Zosimas to bury Mary of Egypt. The lion venerated Mary to the extent of “licking the soles of her feet.” That takes Jesus’ humble act of washing his disciples feet to a further level of self-abasement. In a symbol of the prophesied blessed time, the lion afterward withdrew “like a sheep” into the desert.[6]

Zosimas was explicitly described as 53 years old when he set out on the journey that would lead him to Mary of Egypt.  Given the symbolic density of the Life of Mary of Egypt, that age is probably significant. A key prophetic passage from a Christian perspective occurs in Isaiah 53. That chapter tells of the suffering servant:

Who has believed what we have heard? And to whom has the arm of the Lord been revealed? [7]

Zosimas came to understand that the Lord was revealed to Mary of Egypt, the former harlot. Few would have believed that. The Life of Mary of Egypt offers better understanding to everyone.

[1] All the details described in this post are from the Life of Mary of Egypt, written in Greek probably in the seventh century. Kouli (1996) provides an English translation. Here’s an alternate online English translation. Some have tried to construct from the figures given a chronology of the life of Mary of Egypt. That seems to me to be an mis-reading of the numbers’ meanings. Cf. Id. p. 85, n. 54, and p. 86, n. 55.

[6] John 13:1-15 (Jesus washing the feet of his disciples). In the Life of Saint Paul the First Hermit, two lions help Antony bury Paul. Those lions came to Antony and licked his hands and feet. On the peaceful kingdom, Isaiah 11:6.

[image] Wadi in Nahal Paran, Negev, Israel. Thanks to Mark A. Wilson (Department of Geology, The College of Wooster) and Wikicommons.