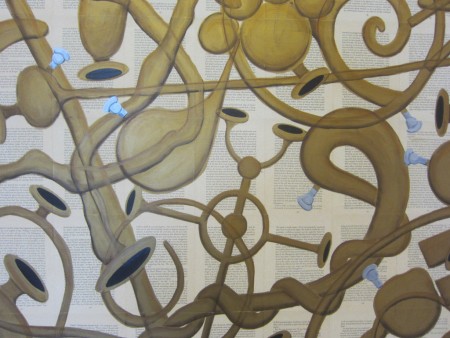 Near the beginning of Liber Manualis, the learned Duchess Dhuoda wrote to her fifteen-year-old son, “You and I must quest for God, my son.” To him she declared her unworthiness and feebleness. She then offered a metaphor:

Now it sometimes happens that a troublesome little female puppy among the other whelps under the master’s table can seize and devour the crumbs that fall. He who made the mouth of a dumb animal speak has the power, according to his mercy from of old, to open my senses and give me understanding. … At least I may gaze from under his table, that is to say, within the Holy Church, at the little male whelps in the distance, those who are ministers to the sacred altars. From among the crumbs, I shall be able to gather — by spiritual wisdom — for myself and you, William, my beautiful son, words that are beautiful and luminous and worthy.[1]

William probably wouldn’t have understand well his mother as a “troublesome little female puppy.” A sense of Dhuoda’s inadequacy is only the beginning of her meaning. Her metaphor grows into much different understanding.

Dhuoda’s metaphor discards worldly distinctions in the quest for God. Dhuoda’s metaphor doesn’t hierarchically distinguish priests, herself, and her son. Dhuoda, not “ministers to the sacred altars,” acts to serve William. Dhuoda’s reference to making a dumb animal speak comes from a similar self-reference by the eminent bishop Gregory of Tours.[2] In Dhuoda’s metaphor, the male priests are, like her, whelps within the mother Holy Church. Dhuoda’s metaphor is based on the biblical pericope of the Canaanite woman and Jesus. That pericope is plausibly interpreted as showing Jesus mocking his disciples’ arrogance. The Canaanite woman, tested in ways that didn’t demean pagan heroes, emerged as a Christian hero in service to her daughter. Dhuoda wanted to be such a woman for her son William.

if the whole sea were filled with ink, and the earth made of paper, and all the inhabitants of the terrestrial globe were only employed in writing, that would not suffice to give an exact account of all the miracles Krishha has performed [3]

One of the earliest and most secure jobs for persons with literary learning has been and remains to recognize, support, and praise the important and great acts of a patron. Implicit in the “sea of ink” figure is the importance of the writer’s job. Dhuoda ridiculously expanded the writer’s figure of professional self-importance and balanced it with an expansive description of God’s greatness:

if heaven and earth were extended through the sky like a charter on a spread-out sheet of parchment, and if all the gulfs of the sea were transformed, tinged like inks of many colors, and if all the earth’s inhabitants born in the world from the beginning until now were — through some increase of human wisdom, an impossibility contrary to nature — writers, they would not be able to capture the grandeur, the breadth, the loftiness, and be able to tell of the depth, of the sublimity and divinity, and wisdom, and goodness, and mercy of him who is called God.[4]

Dhuoda’s literary reconstruction of the “sea of ink” figure preceded by more than a millennium a related deconstruction of it by the celebrated U.S. public figure Oliver Wendall Holmes. In 1890, he wrote:

If all the trees in all the woods were men,
And each and every blade of grass a pen;
If every leaf on every shrub and tree
Turned to a sheet of foolscap; every sea
Were changed to ink, and all the earth’s living tribes
Had nothing else to do but act as scribes,
And for ten thousand ages, day and night,
The human race should write, and write and write,
Till all the pens and paper were used up,
And the huge inkstand was an empty cup,
Still would the scribblers clustered round its brink
Call for more pens, more paper, and more ink.[5]

Dhuoda was more subtle than Holmes, and less cynical. She also seems to have truly believed that God is great and uncircumscribable.[6]

Dhuoda’s discussion of fornication includes a subtle, playful contrast. The headline contrast seems to be a highly formulaic contrast between fornication and chastity. Dhuoda gave her son relevant biblical wisdom:

Avoid fornication, my son, and drive your thoughts away from any harlot woman.[7]

She also implicitly acknowledged the difficulty of following that wisdom. Since eyes may stray, she counseled William to have inner strength. She also warned of the sexual “shamelessness of women,” implicitly meaning some women in particular circumstances. When women illicitly approach lustfully, she urged him, “Fend them off!” Sexuality in marriage is a sharply contrasting affair. Dhuoda enumerated holy biblical men who married and had children. She joyfully envisioned William having children. Dhuoda commended as husbands:

{men} who soldiered within the marriage-bed and applied themselves to keeping a heart pure in Christ.[8]

The late-eighth-century Arabic text Bilauhar and Budasaf described a knight who recognized his foremost martial-marital responsibility: to be always ready to satisfy his wife’s sexual desire, lest she stray from the marriage bed. Whether Dhuoda knew that story or a similar story is lost in history. But even without that context, her marital advice to her young, unmarried son has personal sparkle.

Dhuoda’s love for her son is at the core of her writing for him. Her writing conveys the immediacy of a specific relation of love. Yet Dhuoda is also a subtle, complex writer. She offers a sophisticated, Trinitarian understanding of love and much joy in play of contrasts.

[1] Dhuoda, Liber manualis, 1.2, from Latin trans. Thiébaux (1998) p. 61. I’ve changed “its master’s table” to “the master’s table” to indicate that the master is the master of all the whelps. Similarly, I’ve changed “their crumbs” to “the crumbs”: the crumbs are from the master for everyone. The word for whelps is catulos. That can mean either whelps in general or male whelps specifically. The second instance of that word refers to “ministers of the sacred altars.” For that instance only, I’ve replaced “whelps” with “male whelps.” Subsequent text from Liber manualis is from id., with some minor changes I’ve made.

[6] That the fullness of God is all encompassing and beyond human understanding is a theme in Dhuoda’s work. Liber manualis, Bk 1-2.