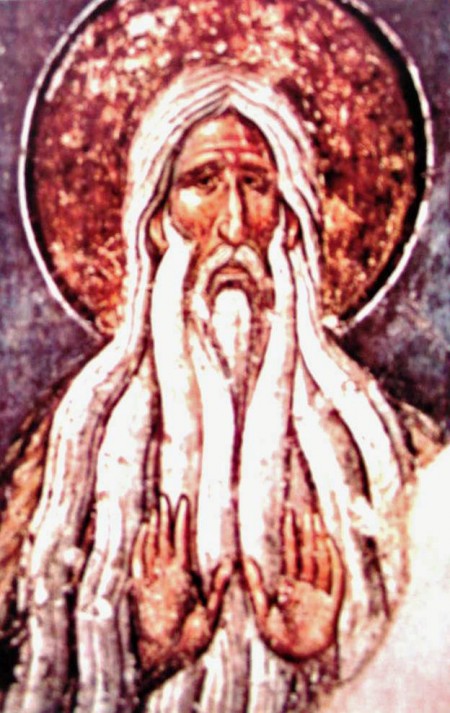 Saint Macarius, known as the great luminary and spiritbearer, was early in his life falsely accused of a masculine sex crime. Macarius was an Egyptian Christian born about the year 300. As has been common for men historically, Macarius was pressured into marriage and a career. He sought only to withdraw from society and save his soul. Through the terrible injustice of a false sex accusation against Macarius, God guided him to realizing his dream of becoming a holy man. The Life of Saint Macarius of Scetis has inspired many other men and women to seek solace in wastelands and give birth to souls filled with the holy spirit.

The false sex accusation against Macarius originated in plans to marry. A young woman and young man loved each other. They sought to marry. Men, however, are expected to offer not only their loving being in marriage, but also material resources. Because the young man’s parents were poor, he wasn’t able to marry the young woman. They nonetheless had sex. In accordance with the fundamental reality of biology, she got pregnant. They feared that their parents would kill them both for what they had done.

The young woman and young man plotted together to accuse falsely Macarius of the masculine sex crime of “getting a woman pregnant.” The Life of Saint Macarius of Scetis explains:

When the parents of the young girl found out that this had happened to her, they asked her, “What has happened to you? Who did this? Tell us!” She, just as she had been instructed by the young man, said, “I went to see the anchorite {Macarius} one day. It was he who did this to me. He got me pregnant.” [1]

The parents, supported by a crowd, confronted Macarius. Without even bothering to hear Macarius’s response to the charge, the crowd “beat him badly enough to enough to kill him.” Macarius, who had done no wrong, protested, “What has happened that you hit me so mercilessly like this?”[2] The crowd didn’t respond to Macarius’s question. The crowd instead proceeded to humiliate him:

they bound to his back some pots smeared with soot and dragged him through the middle of the village, with a crowd of children walking with him, beating him and pulling him this way and that like they do to those who are crazy, all of them crying out about him in a single voice and saying, “He stuck the girl!”

Macarius suffered a brutal physical beating and public humiliation. Those punishments, imposed on him without due process, were the result of a false accusation of “getting a woman pregnant.”

Macarius also had child support payments imposed on him. After some Christians heard Macarius’s account of what had happened, they responded:

“What you people are saying is not true. We know from our previous experience with him that this man is faithful and righteous.” And they stood around him and loosened the bonds and also broke the pots smeared with soot that had been placed around his neck.

The father of the young man insisted, however, that Macarius pay child support as a condition for being freed:

You can’t do that {free Macarius} until he guarantees that when the young girl gives birth he will pay the cost of her delivery and provide for the raising of her child.

One of Macarius’s close supporters agreed to provide that guarantee so that Macarius could be freed. Macarius the anchorite humbly accepted forced financial fatherhood:

When he entered his cell, he said to himself, “Macarius, look! You have found yourself a wife. Now the situation requires you to work night and day so you can provide for yourself and for her and her child.” And so he diligently got to work and he gave the baskets that he made to his supporter in order to sell them and give the money he made to the woman so that when she gave birth she could use it for herself and her child. [3]

Macarius thus became subject to the sort of indentured servitude that has oppressed many men throughout history.

Oppressing men hurts women. In the case of Macarius, it prevented the joy of new birth:

when the time came for that wretched young girl to give birth, the labor pains were severe and difficult. She was in danger of dying for four days and four nights and was not able to give birth. Her mother said to her, “What is happening to you, my daughter? Look, much longer and you’ll be dead.” She {the daughter} said, “Truly I deserve to die; not only have I sinned but I have also falsely accused God’s servant the anchorite. That holy man did not touch me at all; no, it was such and such young man who got me pregnant.”

After confessing the truth about her false accusation against Macarius, the young woman was able to give birth. When news of the young woman’s redirected charge of “getting her pregnant” reached the young man, he wisely fled. Crowds came to see Macarius and glorified and praised him. Macarius wisely fled to the Scetis desert.[4]

Today men recognizing the reality of men’s social position are fleeing to desert isolation like Macarius did. Everyone should be concerned, because men withdrawing from society hurts women.

The Life of Saint Macarius of Scetis s. 14 earlier describes gender mutuality in the young woman and young man’s plotting:

The two of them were afraid that their parents would kill them on account of the shame they had brought them and so they devised a plan filled with iniquity, adding another great sin on top of their previous fornication. Each partner said to the other, “What will we do? If our parents find out about it they will kill us, but let’s say that the priest, the anchorite, is the one who did it because he’s a stranger and no mercy will be shown to him.”

Trans. id. 165. The subsequent text has the woman make the accusation, with responsibility for the accusation shifted to the man (“just as she had been instructed by the young man”). The text thus depicts women’s social privilege of relatively credibility and men’s relative burden of blame.

The Life of Saint Macarius of Scetis has survived in three, tenth-century Coptic manuscripts. It was probably written between 623 and 784 GC. Id. p. 35. A shorter version of the story of falsely accusing Macarius of paternity exists in the first part of the section on Macarius the Great in the Greek Sayings of the Desert Fathers (Apophthegmata Patrum) and similarly and nearly identically in the closely related Coptic Sayings of the Desert Fathers. For an English translation of the story in the Greek Sayings, Ward (1984) pp. 124-5, available online. For the story in the Coptic Sayings, Vivian (2004a) pp. 51-3. For an overview of ancient literature on Macarius, Evelyn White (1932) pp. 60-72. The Life of Macarius of Egypt in the Greek Lausic History of Palladius doesn’t include this story. The Coptic Life of Macarius of Egypt likewise doesn’t include the false accusation story. For a translation of the latter, Vivian (2004b) pp. 93-130.

[3] In the translation from Vivian (2004a), p. 167, I’ve replaced “his servant” with “his supporter.” The man who helped Macarius live as an anchorite wasn’t a servant in the modern sense of a menial-subservient person working for a wealthy, high-status person. Early Christian monks who lived isolated, austere lives in the Egyptian desert had persons who provided minimal necessary connections to the rest of the world. The man collecting baskets from Macarius was such a person.

[4] Palladius apparently wrote the Apophthegmata Patrum in Asia Minor long after he left Egypt. The text in its surviving form apparently is from Palestine and dates no earlier than the late-fifth century. Brakke (2013) p. 240. Yet the story of the false accusation of Macarius is historically significant:

even the strangest and most supernatural anecdote may have some root in actual monastic experience. … we may never ascertain what actually happened before traditions began to circulate, but the investigation into how monastic stories were transmitted and revised nonetheless helps us to see the concerns and values that animated early monks — and these concerns and values were certainly real.

[image] Ancient fresco of Saint Macarius of Egypt. Thanks to Roman Zacharij and Wikimedia Commons.

Evelyn White, Hugh G., with Walter Hauser, and Albert M. Lythgoe. 1932. The monasteries of the Wadi ‘N Natrun, Part II: the history of the monasteries of Nitria and of Scetis. New York: Metropolitan Museum of Art.

Ward, Benedicta. 1984. The sayings of the Desert Fathers: the alphabetical collection. Rev. ed. Kalamazoo, Mich: Cistercian Publications. (the relevant story, Macarius the Great, s. 1, is identical to that in the original, 1975 edition).