The narrator of Le Ménagier de Paris (The Householder of Paris) seems to be an avuncular, kindly man. In this work written in French about 1393, the narrator worries that he might be boring or over-taxing his intended reader, his young wife. He worries that she might “despair of ever being able to bear the heavy burden of all my advice.”[1] To illustrate that her wifely burden is relatively light, he inserts in his text the lengthy allegorical-didactic work Le Chemin de Povreté et de Richesse (The Way of Poverty and Riches). That text describes a husband’s crushing burden of work. The husband’s heavy responsibilities gives him no position of privilege. Drawing upon practical reason and folk wisdom, Le Chemin de Povreté et de Richesse urges husbandly subordination even to apparently lunatic wives. 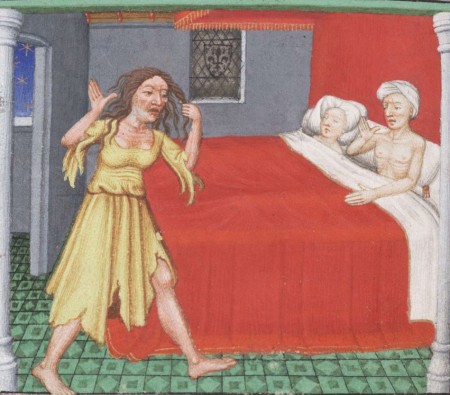 Le Chemin de Povreté et de Richesse begins with a newly married man anxiously awake while his wife soundly sleeps in bed next to him. The husband had a lengthy visionary experience of his life’s challenges. The following day the husband recounted to his wife that experience. She in response castigated him:

What are you talking about? Are you out of your mind? You are not making any sense rambling on to me about your night — it is a fantasy invented out of some kind of lunacy! [2]

That’s a common reaction to men explaining the difficulties of their lives. Women and men have much less empathy for men than for women.

The husband responded practically to his wife’s outburst. He explained:

I remained silent during these taunts, uttering not a word, for becoming vexed with her would gain me nothing. Plus, I recently learned from a wise man that no one should value anything that a woman says, whether good or bad, quarrel or slander. A woman always wants to be praised and acknowledged for her words. She does not want to be reproved; rather, she wants to be commended and esteemed as highly for the bad as for the good. This habit I know well, and so I ignored the derision. Yes, one must hold one’s tongue before a woman and do what she wants.

Those comments are problematic. Doing what a woman wants requires listening to her to some extent. The husband’s point seems to be that men should accept derision from their wives and not challenge what their wives say. He advised other men to be similarly subordinate to their wives:

I thus advise all those who have wives: however lunatic it may seem to let them have their way, it is even greater madness, in my opinion, to displease them. For a woman will never be satisfied if her husband defies her until, sooner or later, she had gotten the better of him twice over. Otherwise she betrays her woman’s nature. Thus if he must choose the lesser of two evils, he does right to draw himself near one danger in order to withdraw from a greater danger. [3]

Women naturally gifted with high sexual allure have extraordinary power over men. Family courts that are egregiously irrational and anti-men give reason for men to cower in marriage. But the problem of men’s subordination to women is much more general. For most men, doing what women want is much easier that standing up for their own needs and desires.

Le Chemin de Povreté et de Richesse shows that the way to riches is treacherous. That text was written in fourteenth century Europe, probably in 1342. Husbandly subordination to wives in practice didn’t prevent Europe from becoming materially rich. Yet that history isn’t solid ground for complacency. Even easier than husbands being subordinate to wives is men not caring and not doing. That is a sure way to poverty.

[1] The translation of Power (1928), which is entitled The Goodman of Paris, presents the narrator as “avuncular, benevolent, even doting.” Brereton & Ferrier (1981) “characterize the narrator as ‘kindly’ and encouraging of his wife.” Greco & Rose (2009), in contrast, dourly titles its introduction “Maid to Order: The Good Wife of Paris.” Id. pp 7, 1. Greco & Rose explain:

The sections lessoning the wife on estate management, for example, reflect the surveillance and tight control the householder wants to have over his spouse and his minions, his vegetables, his horses, his dogs and his birds.

Id. p. 7. This new way of reading Le Ménagier de Paris indicates the ideology underlying the rise of mass incarceration in the U.S.

[2] Le Ménagier de Paris 2.1 (inserted text of Le Chemin de Povreté et de Richesse), from Old French trans. Greco & Rose (2009) p. 208. In their introduction to this article of the text, the editors explain that the husband’s “down-to-earth wife disbelieves his outlandish story of these travels.” Id. p. 178. The husband might come to regard his wife as down-to-earth in the way that Matheolus regarded Petra in their rocky relationship. The subsequent quotes are from Le Chemin de Povreté et de Richesse, id.

[3] Medieval scholars have described this section of the text as an “antifeminist diatribe.” Ferrier (1979) p. 79; Greco & Rose (2009) pp. 41, 179. Much more important than name-calling is recognizing how such attitudes contribute to the subordination of men.