About 1150 years ago in what’s now Iraq, the caliph al-Mutawakkil received as a gift four hundred slave girls. He loved above all others Mahbubah. She was a poet and singer, with a beautiful face and voice. Her name means “beloved.” 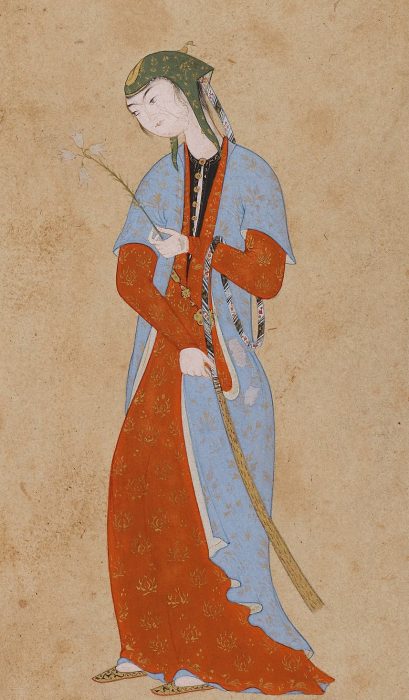 One day, al-Mutawakkil was drinking with Mahbubah. He gave her an apple perfumed with an expensive musk blend. She kissed the apple and then departed. Soon one of Mahbubah’s slaves returned with a piece of paper. The paper contained a poem as sensuous as the scented apple:

You — fragrance of an apple I had to myself —
you ignite in me the fire of ecstasy.
I weep and complain of my malady,
and of my grief’s intensity.
If an apple could weep, then the one I hold
would shed such tears of pity.
If you do not know what my soul has suffered,
look, the proof is my body.
If you gaze upon it, you will see
one unable to suffer patiently. [1]

Everyone found those verses “utterly delightful.” The caliph ordered the verses set to music. That was the only song sung for the rest of the day.

A highly privileged slave girl, who herself owned slaves, passionately urged her owner to gaze upon her body. Such circumstances explode the minds of present-day men-hating academics. But wives, you might enjoy trying such poetry with your husbands.

Caliph al-Mutawakkil appreciated other women’s beauty. One day upon a visit to the woman poet Qabihah, he found that she had written his name on her cheek using an expensive blend of musk perfume. Al-Mutawakkil said to ‘Ali, his close friend and confidant:

‘Ali, I’ve never seen anything more beautiful than that streak of black against her white cheek. Go ahead and compose a poem for me about that!

Mahbubah had been sitting behind a curtain in the same room and heard what her beloved al-Mutawakkil had said. Before ‘Ali managed to make any progress on the requested poem, Mahbubah improvised the following verses:

She wrote “Ja’far” in musk on her cheek,
how lovely that streak where the musk left its mark!
On her face she wrote just one line,
but she etched many more on my heart.
Who can help a master in thrall to his slave,
subservient in his heart, but plain to see,
Or one whose secret desire is Ja’far —
may he drink his fill from your lips! [2]

Al-Mutawakkil’s given name was Ja’far. In sympathy with her owner’s love for another woman, Mahbubah wrote the first four lines in his voice. The next two lines are from an objective, third-person perspective. The last two lines sympathize with the other woman, Qabihah. Mahbubah addressed to Qabihah a prayer that she experience passionate intimacy with al-Mutawakkil. That’s astonishingly big-hearted generosity, as difficult to imagine today as the big-hearted generosity of Bacchis and Colophon.

Mahbubah remained loyal to al-Mutawakkil even after he was assassinated. Al-Mutawakkil’s Turkic chamberlain Wasif, who was a eunuch and an enslaved soldier who rose to become a general, participated in the assassination. One day after al-Mutawakkil has been killed, Wasif ordered that the court slaves be displayed for him:

They arrived in all their splendor, adorned, perfumed, and dressed in brightly colored clothes bedecked with jewels, except for Muhbubah, who came dressed in plain mourning white and not wearing any makeup.

Wasif and the slaves sang, drank, and enjoyed themselves. But as a eunich, Wasif probably didn’t enjoy himself with the slave girls in a way that al-Mutawakkil had. Wasif ordered Mahbubah to sing. Sobbing, she took a lute and sang:

What sweetness does life hold for me
when I cannot see Ja’far?
A king I saw with my own eyes
murdered, rolled in the dust.
The sick and the sorrowful,
they can all heal;
But not Mahbubah —
if she saw death for sale,
She would give everything she has to buy it
and join him in the grave.
For the bereaved, death is sweeter than life.

The slave girl Mahbubah loved her former owner, the assassinated caliph al-Mutawakkil, with loyalty that transcended death. She was a strong, independent woman who sang a declaration of political rebellion. Infuriated, Wasif was about to order Mahbubah killed. But Wasif’s co-commander asked for her. He received her and freed her. She left the city and died in isolation and grief.

For her amazing love, Mahbubah deserves to be remembered and celebrated.

[2] In the ancient Islamic world, poets competed aggressively with each other for acclaim. Slave girls’ poetic skill sometimes overwhelmed their attractiveness. For example, the poet Ibn Abi Tahir visited the slave girl Nabt. He noted, “She had a lovely face and voice.” But her skillful capping of poetic lines humiliated Ibn Abi Tahir. He got up and left. Id. p. 93. The most highly intelligent women know how to use their intelligence intelligently.