Prominent women writers of the European Middle Ages had loving concern for men. So too did some women in ancient Greece. About 2350 years ago on the Greek island of Samos, a beautiful young woman named Bacchis showed that she had the inner beauty of generosity and sympathy for men. 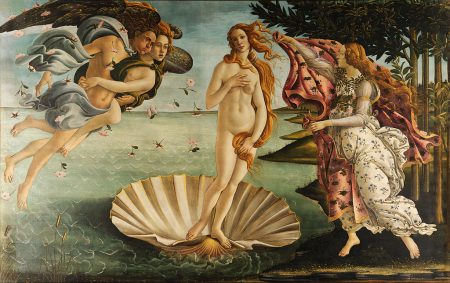 Bacchis, a courtesan, had as a lover a young man named Colophon. They had a torrid, wild love affair. Nonetheless, Colophon also fell in love with the extremely beautiful, notorious courtesan Plangon of Miletus.[1] Plangon first told Colophon that to have her he would have to give up Bacchis. But Colophon, like the big-hearted Ovid, sought to have more than one lover.

Plangon then concocted a scheme to pry Colophon from Bacchis. She told him that she would sleep with him only if he gave her a necklace that everyone knew belonged to Bacchis. She was trying to humiliate Bacchis and kindle her wrath against Colophon. Women are far superior to men in formulating such schemes.[2]

Lovesick for Plangon, Colophon urgently implored his girlfriend Bacchis for help. He explained everything to her. He put his life in her hands:

He was so besotted {with the courtesan Plangon} that he begged Bacchis not to let him die before her eyes. When she saw how desperate he was, she gave it {the necklace} to him. [3]

Bacchis deserves to be as famous as Abelard’s wonderful lover Heloise. Bacchis’s loving care and generosity toward Colophon marks her as being at the summit of womanhood.

The story of Bacchis, Colophon, and Plangon ends with poetic justice. Imagine this:

Plangon recognied Bacchis’s lack of jealousy and sent the necklace back to her, but still slept with the young man. After that, the women were friends and treated him as the lover of them both.

You may say that the author is a dreamer. But he’s not the only one. I hope some day you’ll join him, and then the world will live as one.

[1] McClure (2003), p. 192, dates Plangon of Miletus at 350-330 BGC. Plangon was also known as Pasiphile (“wide-loving”). Cf. Pasiphaë. Bacchis was from Samos. Samos was reputedly the hometown of the transgressive thinker Aesop.

Id., Appendix III, provides a useful table of all the courtesans and prostitutes explicitly named in Athenaeus, The Learned Banqueters, Bk. 13. But that table regrettably lacks information on customer service and customer satisfaction.

[2] Gynocentrism tends to repress recognition of this truth. Menetor in On Dedications reportedly wrote:

like a fig-tree among the rocks that feeds many ravens,
good-hearted Pasiphile {Plangon} who receives many strangers

[image] The Birth of Venus. Oil painting. By Sandro Botticelli, 1483-85. Thanks to Wikimedia Commons.