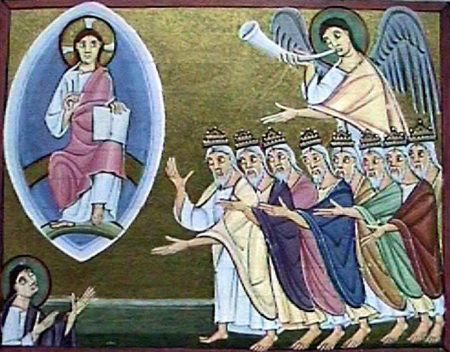 While enduring disgrace in Constantinople in 1414, Mazaris found himself translated to Hades. Byzantines educated in the classics typically went to Hades only after they died. The misplaced Mazaris encountered in Hades his friend the recently deceased imperial secretary Manual Holobolos. Holobolos advised Mazaris to move from Constantinople to the Peloponnese (a region in southern Greece) to become famous and wealthy. When Mazaris returned to his proper place in the upper world, he followed his friend Holobolos’s advice.

Holobolos’s advice led Mazaris to misery. Moving from Constantinople to the Peloponnese would have been like moving from cosmopolitan New York City to the rural hollows of Appalachia. In the Peloponnese, Mazaris experienced even greater poverty and obscurity than he had endured in Constantinople. With bitter invective, he complained about the diverse mixture of Laconians, Italians, Peloponnesians, Slavs, Albanians, Gypsies, and Jews in the Peloponnese:

If they formed a single race and were encompassed in a single city, troubles would be lighter and of a simple nature and generally speaking the entire society here would be free from graft, political intrigue and meddling, and business would be carried on with due respect for law and justice. As it is, they are a helter-skelter hotchpotch of everything, and each will inevitably imitate the customs, laws, national character, social behavior — in short, the overall pattern of criminality prevailing in each of the other groups, just as it is impossible to keep company with a cripple without acquiring a slight limp. … A great man tells us that the virtues are corrupted by evil associations; now if the good is corrupted by the evil, what is to become of vices when they mix and associate with worse vices, or rather live with them and mingle with them, roll and wallow around with them like pigs in mud and mire? [1]

The local barons in the Peloponnese were a “turbulent, subversive crowd”:

men delighting in battles, riots and bloodshed, always full of deceit, treachery and falsehood, arrogant barbarians, fickle, perjured and forever disloyal to their Emperors and Despots, despicable wretches, but prouder than Tantalus, bums who think of themselves as epic heroes, though tainted with all kinds of excesses and unsavory practices.

Mazaris clearly has a keen sense of irony. The Peloponnese seems like an alternate perspective on cosmopolitan Constantinople. That’s a literary construct like Mazaris suddenly finding himself in Hades.

Mazaris harshly cursed Holobolos for his bad advice. He ranked Holobolos’s advice with the Lemnian deeds and the horrors of the Trojan War. In a letter to Holobolos that begins “My dearest friend,” Mazaris asked ironically for further advice as to whether he would be better off alive in the Peloponnese or dead in Hades. Mazaris concluded his letter to Holobolos:

I beseech Hermes of the Underworld, Persephone and Great Pluto himself, that because of your misleading advice, or rather because of the pressure you put on me to move to the Peloponnese with all my household, you may walk with thorns and thistles in Hades, that the water of the Styx may run dry for you and that you may never in all eternity drink the water of Lethe, so that you can brood night and day on the odious behavior of your rival, as well as on the legacy of gold coins which you were tricked into making over to the Fraudulent Friars. Have a rotten time in Hades, you crook, until the Last Trumpet, waiting for our joyful arrival, whenever it pleases God.

After the array of learned classical references (Hermes, Persephone, Pluto, etc.) come references to worldly debacles. The odious behavior of Holobolos’s rival (“that scion of the evil Angels, the aforesaid Philommataios”) was to usurp Holobolos’s bureaucratic function while he was busily engaged in a torrid sexual affair with “an old flame,” “a nun who had slept with a thousand men.”[2] The Fraudulent Friars were monks of the Xanthopoulon monastery. They had persuaded Holobolos to make them administrators of his estate.[3] The cursing ends with reference to the New Testament figure of the Last Trumpet and Christian eschatology. According to Pauline letters, when the Last Trumpet sounds, the dead will be raised to be with God.[4] Mazaris, as a good Byzantine Christian, didn’t presume to beseech God to let Holobolos forever rot in Hades.

Like Mazaris, the Byzantines in general were masters of invective. Byzantine society was far more liberal and tolerant in embracing communicative freedom than many Western, democratic societies today. Harsh invective in Byzantium could be no more than a matter of ordinary amusement:

Byzantine humor at all levels was always given to insults and abuse, and the more scholarly the writers the greater the abuse. Making fun of others was seen as a pleasant and relaxing way of exercising one’s wit: the twelfth-century archbishop Eustathios of Thessalonike recounts an incident in which two teachers of philosophy amused themselves on their day off by sitting by the roadside outside Constantinople and insulting travelers. [5]

With renewed emphasis on classical learning and the biblical tradition, humane, civilized societies should be able to practice invective as well as the Byzantines did.

The subsequent quotes from Mazaris’s Journey to Hades are from id. p. 83 (men delighting in battles…) and p. 89 (I beseech Hermes…).

Mazaris’s Journey to Hades is set between January 1414 and October 1415. It was probably written about that time. While Mazaris’s Journey is written in Attic Greek, it includes many foreign loan words, unusual expressions, and pervasive puns. Baldwin (1993) pp. 355-8, Garland (2007) pp. 2001.. Linguistically it seems to be in the tradition of Lucian’s Metamorphoses. Mazaris’s Journey draws substantively upon the “dialogue of the dead” tradition of Aristophanes and Lucian. It contains about fifty references to classical texts. It seems to have been intended for performance before a sophisticated, court audience. Garland (2007) pp. 205, 208. In addition, Mazaris’s Journey has many apparently contemporary, cryptic references, most of which now cannot be interpreted. The narrator calls himself Mazaris. The actual author of the work isn’t convincingly known. Mazaris’s Journey to Hades apparently was dedicated to Theodore II Palaiologos, despot of the Morea from 1407 to 1443. Id. p. 203.

Rather than being an exercise in obscenity and abuse, the text gives us a picture of voluble, self-assertive, highly competitive, and outspoken professional rivals, unafraid of personal comment, and marked by a ready wit, presence of mind, and the ability to score off each other in public encounters. This tells us a great deal about officials at the fifteenth-century Byzantine court. What is generally taken as abuse in our text is in fact exuberant exhibitionism expressed in alliterative wordplay, highly flavored with sexual innuendo. The point of most of the references may be obscure to us, but allusions now lost may once have called forth sniggers or even gales of laughter from the auditors.

[image] Last (seventh) trumpet summoning the dead from Hades according to Revelation 11:15-19. Illumination from the Bamberg Apocalypse, commissioned by Otto II and created in the scriptorium at Reichenau between 1000 and 1020 GC. Bamberg State Library, Msc.Bibl.140. Image thanks to Wikimedia Commons.

One thought on “fine Byzantine invective: Mazaris to his friend Holobolos in Hades”