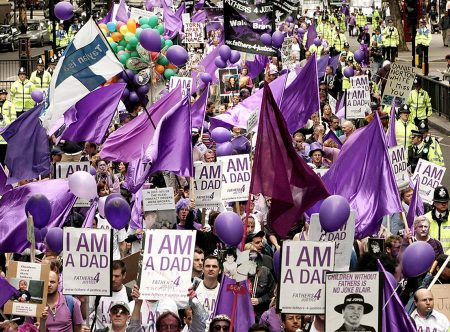 Fathers 4 Justice emerged early in the twenty-first century as super-courageous social justice advocates. Fathers, however, generally have done little to advocate for men. Because of favoritism toward women, love for grandchildren, and gender inequality in parental knowledge, fathers typically favor cuckolding husbands over justice for men.

A medieval Latin story from the fifteenth-century churchman Poggio Bracciolini perceptively highlights the problem. A nobleman divorced his wife after a few years because she hadn’t become pregnant. In many countries today, either spouse can unilaterally terminate a marriage without needing any reason. However, in medieval Europe, spouses needed a valid reason for divorce. Infertility was a valid reason. Divorce for infertility didn’t necessarily imply blame on either party.

The wife’s father initially blamed her for the divorce. He thought she had behaved improperly:

her father secretly reproached her for not having given herself freely to others for the work of creation.

But she kindly explained that he was wrong:

“My father,” she said, “For this issue I carry no fault. I have tried all the man-servants and even all the stable-boys, and couldn’t conceive, and the usage didn’t do me any good.”

Her father then understood that his daughter wasn’t to be blamed:

The father grieved for his daughter’s fortune, for she was far from being culpable for being infertile.

The message is clear: as long as a wife has sex with many different men, she shouldn’t be blamed if her and her husband remain childless.[2] Some husbands don’t object to being cuckolded. Some husbands have even worked with their wives within the home to generate family income. Nonetheless, cuckolding, particularly state-institutionalized cuckolding, should be understood as a grave gender injustice perpetrated against men throughout evolutionary history.

[1] Poggio, Facetiae 221, “Excuse of an infertile daughter to her father {Excusatio sterilitatis filiae ad patrem},” Latin text from Poggoi (1879) vol. 2, pp. 148-9. Here and subsequent quotes include my English translation, drawing upon that of id., but tracking the Latin more closely. All subsequent quotes above are similarly from id.

[2] More than 2000 years ago, the Roman author Lucretius wrote of the importance of trying different sexual partners to find a fertile combination:

And many a barren and often-wedded woman
Will find the man to enable her at last
To carry the sweet treasure of a child.
And men whose wives, though fertile, could never bear
Children, have found concordant women too
To fortify their age with progeny.
So much it matters that the seeds can fuse
In the fit way to cause conception: thick
Most suitable for the runny and vice versa.

Lucretius, De rerum natura {On the nature of things} 4.1251-1259, Latin text from Brown (1987) p. 160 (nearly identical that that from the Latin Library), English translation from Esolen (1995) p. 157. Poggio Bracciolini discovered a manuscript of Lucretius’s De rerum natura and helped to re-introduce that work into European literary culture. Jews, Christians, and Muslims are less concerned that sex result in children. They at least nominally disapprove of adultery and cuckolding, even for the instrumental purpose of having children.