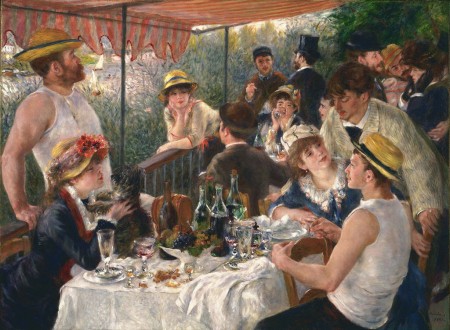 From an evolutionary perspective, sophisticated social communication plausibly has been more significant for woman than for men.  Among non-human primates, both females and males compete physically and aggressively with other group members.  Among humans, physical aggression is more characteristic of men than of women.[1]  That sex difference doesn’t mean that women are essentially more peaceful and cooperative than men.  Aggression can be indirect:

just like the other primates, coalitional relationships among women also function to facilitate aggressive within-group competition for valuable, monopolizable resources; unlike other primates, this aggression {women’s aggression} relies not on physical but informational capabilities. [2]

According to scholarly research, women collect, analyze, and disseminate information to attack the reputations of other women in competition for material and social resources.  Indirect aggression is much more characteristic of adolescent girls than of adolescent boys.[4]  Human evolution plausibly has generated greater capabilities for indirect aggression in women than in men:

Women are intelligent organisms whose purposeful activities have evolutionary significance.[6]  Human communication capabilities affect not only humans’ success in competition with other species, but also competition among humans.  Indirect aggression or informational aggression and attacks on reputation makes sense within social-evolutionary understanding of humans.

An abstract concept of reputation, however, does not relate well to empirical knowledge about actual practices of communicative competition.  Consider this hypothesis:

Compared to men, a greater fraction of female reputation depends on difficult-to-confirm dimensions of reputation [7]

[6] Exposition of this obvious point is central to the work of the influential scholars Sarah Blaffer Hrdy and Anne Campbell.

Campbell, Anne. 2002.  A mind of her own : the evolutionary psychology of women. Oxford ; New York, Oxford University Press.