Late in the fourth century, Jerome brought the Greek biblical scholarship of Origen to the Latin-speaking western Roman Empire.  From Jerome’s perspective, Origen’s primary merits were: 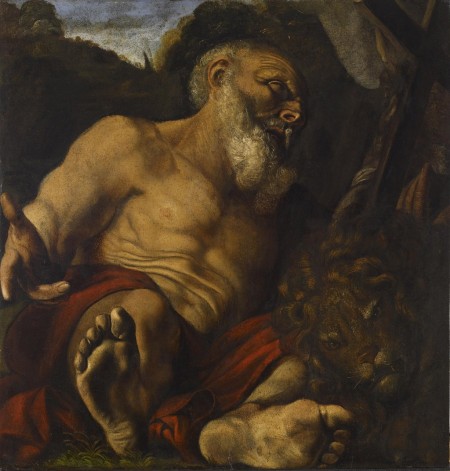 In a letter written in 384, Jerome claimed to have vowed to forsake worldly books.  Jerome as a young man received a broad education  in non-Christian Greek and Latin works.  He found Cicero and Plautus particularly attractive.  However, one night early in his life he dreamed that he was caught up in the spirit and dragged to the judgment seat.  Amid dazzling light:

I was asked to state my legal status; I replied that I was a Christian.  But He who presided said: “You lie.  You are a follower of Cicero, not a follower of Christ.  ‘For where your treasure is, there your heart will be also.'”  Straightway I became dumb, and amid the strokes of the whip — for He had ordered me to be scourged — I was even more bitterly tortured by the fire of conscience [2]

At last the bystanders fell at the knees of Him who presided, and prayed for Him to pardon my youth and give me opportunity to repent of my error on the understanding that the extreme of torture should be inflicted on me if ever I read again the works of Gentile authors.  In the stress of that dread hour I should have been willing to make even larger promises, and making an oath I called upon His name: “O Lord, if ever again I possess worldly books or read them, I have denied you.”

Jerome’s vow, contained within a tissue of allusions to Virgil, is best understood as a literary bow to Origen.[3]  Origin reportedly gave away his library of ancient Greek literature in turning from a career as a Greek grammarian to a new career of sacred studies.  In his dream, Jerome followed Origen.[4]

Jerome remained engaged with non-Christian literature and rhetoric throughout his life.  Jerome’s writings are filled with references to Horace, Terrence, Virgil, and Cicero.  His library at Bethlehem, where he retreated to live as a Christian scholar-monk, contained a wide range of non-Christian books.[5]  Jerome apparently first read Juvenal between 382 and 385.[6]  Juvenal was an important literary influence in Jerome’s construction of Theophrastus’ Golden Book on Marriage.  In a letter to an orator dated to 397, Jerome discretely observed:

You ask me at the close of your letter why it is that sometimes in my writings I quote examples from secular literature and thus defile the whiteness of the church with the foulness of heathenism. … You must not adopt the mistaken opinion, that while in dealing with the Gentiles one may appeal to their literature in all other discussions one ought to ignore it; for almost all the books of all these writers — except those who like Epicurus are no scholars — are extremely full of erudition and philosophy.  I incline indeed to fancy — the thought comes into my head as I dictate — that you yourself know quite well what has always been the practice of the learned in this matter. [7]

Jerome’s letters are written in highly polished literary Latin.  After he spent about two years in Constantinople from 380, Jerome became a proponent of Greek Christian learning.[8]  He probably also gained greater appreciation for Greek non-Christian literature.

Jerome seems to have first read Galen in or shortly before 393. Jerome’s Adversus Jovinianum, written in 393, explicitly cited Galen twice.  In the course of making functional-teleological arguments common in Galen, Jerome declared:

Hyena’s gall restores brightness to the eyes, and its dung and that of dogs cures gangrenous wounds. And (it may seem strange to the reader) Galen asserts in his treatise on Simples, that human dung is of service in a multitude of cases. [9]

Galen here appears as an authority capable of carrying a surprising claim.  The reference to the specific Galenic work underscores that Galen’s surprising claim isn’t a commonplace.  Later in Adversus Jovinianum, Jerome explicitly specified Galen’s authority and cited him congenially:

Galen, a very learned man and the commentator on Hippocrates, says in his exhortation to the practice of medicine that athletes whose whole life and art consists in stuffing cannot live long, nor be healthy: and that their souls enveloped with superfluous blood and fat, and as it were covered with mud, have no refined or heavenly thoughts, but are always intent upon gluttonous and voracious feasting. [10]

Both of these citations to Galen are accurate, technical, and specific.  While Jerome had an extraordinarily good memory, he probably didn’t remember these citations from long before.[11]

Galen would have been an attractive figure for Jerome.  Galen studied the Hippocratic corpus with the reverence and textual-philological attention that Jerome brought to the Bible.  Galen emphasized that a good physician must be extremely hard-working.  Galen produced an enormous corpus of scholarly work.  His work presents a persona “combative, opinionated, pedantic, long-winded, even unscrupulous.”[12]  Those adjectives also characterize Jerome’s persona.  Galen harshly attacked the Epicureans.  Galen declared:

{the excellent physician} will, necessarily, not only despise money, but also be extremely hard-working. And one cannot be hard-working if one is continually drinking or eating or indulging in sex: if, to put it briefly, one is a slave to genitals and belly. [13]

In Adversus Jovinianum, Jerome attacked Jovinian as “the Epicurus of Christianity.”  Jerome’s rhetoric, translated from Latin into Greek, would need no other modification to fit within a Galenic work:

I must in conclusion say a few words to our modern Epicurus wantoning in his gardens with his favourites of both sexes.  On your side are the fat and the sleek in their festal attire.  If I may mock like Socrates, add if you please, all swine and dogs, and, since you like flesh so well, vultures too, eagles, hawks, and owls.  We shall never be afraid of the host of Aristippus.  If ever I see a fine fellow, or a man who is no stranger to the curling irons, with his hair nicely done and his cheeks all aglow, he belongs to your herd, or rather grunts in concert with your pigs. [14]

Both Jerome and Galen positioned themselves as critics of their contemporary scholarly world and as seekers of true knowledge.[15]  Both were anti-sophists working in the style of sophists.

Both Jerome and Galen advanced scholarship from within another profession.  Galen treated patients in his long and laborious clinical practice as a doctor.[16]  Jerome spent perhaps eighteen months living as a hermit in the desert outside Antioch.[17]  He spent much of his later life living as a monk in a small monastery in Bethlehem.  While Jerome built for himself in Bethlehem an expensive library, he did not live the life of an urban orator or teacher seeking to develop a school of rich and well-connected male students.[18]  Women financially supported Jerome.  He in turn instructed them in Christian ascetic living.  Jerome, like Galen, had a profession open to persons with little formal learning.

Galen wrote a treatise declaring that the best physician is also a philosopher.  Jerome through his work implicitly claimed that the best Christian ascetic is also a biblical scholar.  Both attacked what they regarded as bad scholarship in ways that scholars (at least today) regard as uncollegial.  Seeing Jerome merely in the persona of Origen obscures Jerome and Galen’s common position across Greek and Latin, Christian and non-Christian knowledge competition.

having come to the conclusion that he ought not to depend on the support of others, he {Origen} gave away all the books of ancient literature that he possessed, though formerly he had fondly cherished them, and was content to receive four obols a day from the man who purchased them.

Could Eusebius’s account of the fate of Origen’s library have played a role — perhaps an unconscious one — in Jerome’s concoction of the story of his dream?

Jerome was highly creative.  Jerome seems to me likely to have constructed his dream to follow Origen giving up pagan literature.  Jerome probably regretted that he didn’t have a daily financial stipend to support his scholarly work.

his immortal genius, how that he understood dialectics, as well as geometry, arithmetic, music, grammar, and rhetoric, and taught all the schools of philosophers, in such wise that he had also diligent students in secular literature, and lectured to them daily, and the crowds which flocked to him were marvelous.  These, he received in the hope that through the instrumentality of this secular literature, he might establish them in the faith of Christ.

I learned the seven forms of Syllogisms in the Elements of logic; I learned the meaning of an Axiom, or as it might be called in Latin a Determination; I learned how every sentence must have in it a verb and a noun; how to heap up the steps of the Sorites, how to detect the clever turns of the Pseudomenos and the frauds of the stock sophisms. I can swear that I never read any of these things after I left school. I suppose that, to escape from having what I learned made into a crime, I must, according to the fables of the poets, go and drink of the river Lethe.

Jerome, of course, knew “the fables of the poets.”  His claims in Adversus Rufininus about this knowledge of worldly literature is best understand as participating in sophistic argument.

Physicians and others who have written on the nature of the human body, and particularly Galen in his book entitled On matters of health, say that the bodies of boys and of young men and of full grown men and women glow with an interior heat and consequently that for persons of these ages all food is injurious which tends to promote this heat: while on the other hand it is highly conducive to health in eating and in drinking to take things cold and cooling. Contrariwise they tell us that warm food and old wine are good for the old who suffer from humours and from chilliness.

Trans. Freemantle (1892) p. 276.  I haven’t been able to find any other explicit reference to Galen in Jerome’s corpus besides the three cited.  The three references to Galen all date to 393-4.  This is when controversy over Origen’s orthodoxy emerged.  Jerome may have considered Galen as an additional model of work apart from the controversy over Origen.

{it} was typical of his time, place, and social strata, and Galen was not more competitive, hostile, or self-aggrandizing than his peers.

That persona arose within knowledge competition that wasn’t highly institutionalized.

For although he boasts of being a monk, he has exchanged his dirty tunic, bare feet, common bread, and drink of water, for a snowy dress, sleek skin, honey-wine and dainty dishes, for the sauces of Apicius and Paxamus, for baths and rubbings, and for the cook-shops. Is it not clear that he prefers his belly to Christ, and thinks his ruddy complexion worth the kingdom of heaven?

To what end, you ask, these recondite references? To show that you need not expect from me boyish declamation, flowery sentiments, a meretricious style, and at the close of every paragraph the terse and pointed aphorisms which call forth approving shouts from those who hear them.

Trans. Freemantle (1892) p. 246.  The “recondite references” were merely citations of scripture in a letter instructing clergy.  In Letter 28 (To Marsella, dated perhaps 384), Jerome disparaged “foolish knowledge of the knowing.”  That’s a key theme in Galen’s writings.

Williams, Megan Hale. 2006. The monk and the book: Jerome and the making of Christian scholarship. Chicago: University of Chicago Press

One thought on “beyond Origen: Jerome, spiritual doctor in Galen’s persona”