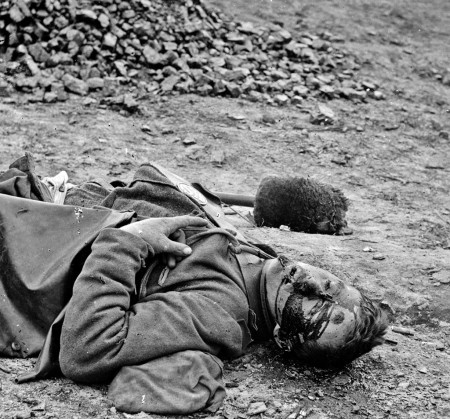 The early Arabic poet Layla l-Akhyaliyya, like eminent medieval European women writers, challenged the oppressive position of men. Throughout recorded history, men have tended to be constructed as instrumental beings — persons providing resources for women and children and fighting and dying for gynocentric society. Many scholars today buttress and obscure this dominant ideology. Layla l-Akhyaliyya was different. In at least one marthiya, she rejected inciting men to kill other men. In her brilliant and under-appreciated qasida, she challenged mis-understanding of women’s power and men’s suffering. Learning to read well Layla l-Akhyaliyya’s poetry can help to recover empathy for men.[1]

Layla l-Akhyaliyya lamented the killing of her beloved Tawba. She described him being brutally hacked to death:

Their swords flocked around him, then it was as if
they left him fired up, sharpened
With each blow of an Indian blade
blood slipped from the sword’s prominent glitter [2]

It was Abdullah who nursed his mother’s son
and returned with the skins of an iron-clad raider
and, like a she-camel with a tulchan, he was beating away from him
the birds of prey which had cast him about with their gullets

The description of the killing emphasizes the inanimate sword. The brotherly grief emphasizes protecting the remains of the man’s body. Killing men corresponds to devaluing men’s bodies.

In common tribal circumstances, killing a man is merely one link in a chain of killing men for blood vengeance. Women inciting men to kill other men strongly supports blood vengeance. With astonishing daring, Layla l-Akhyaliyya highlighted the systemic destruction of men’s lives:

In the U.S. today, four times more men than women die from violence. That reality is almost wholly ignored publicly, as if men’s dead bodies matter less than games of blame among elites tending their cats. Layla l-Akhyaliyya challenged the social normalization of men’s deaths.

Concern for men is key to appreciating fully the intricate poetic art of Layla l-Akhyaliyya’s qasida. Its opening section (nasīb) moves from ambiguous emotion of joy / grief at a desolate campsite to memories of uncle and father, “masters, unsurpassed.” Then, highly unusually for a qasida, comes boasting (fakhr):

How many a distant tribe did we raid in the morning,
so not one of their tents passed the evening under the stars!
We launched on them every swift, lank-fleshed, relentless
mare, rivaling their every swift steed;
{Their every} rough-throated {steed} which, when the reins
draw across his foreshoulders, gallops over soft ground,
raising and dropping his forelegs together.
On {every mare’s} flank, from her speed {and the wind},
a humming like that of a child’s pierced top. [3]

The gendering of the fakhr is telling. Layla l-Akhyaliyya was a woman poet. She almost surely didn’t directly participate in violent raids of other tribes. Underscoring the startling “we” is the sex-typing of “our mares” pursing their male steeds. Mischievously mocking ideologues, Layla l-Akhyaliyya ends her fakhr with comic irony:

But leave this! For how I wish for a rider who, when he
speaks the truth, is not disbelieved!

No person can reasonably deny the truth that socially sanctioned violence is almost exclusively organized as men killing men. But even a poetically ridiculous sexed structure of violence generates little comment, as if it is disbelieved. The actual sex structure of killing is so naturalized that fictionalizing it has no significance.

Lack of social concern for killing men rests fundamentally on ego and ownership. Bravery and skill in killing other men, or more generally in fighting other men, determines men’s social status. Men are too invested in their own socially constructed identity to see the absurdity that Layla l-Akhyaliyya depicts.

The other problem of man’s position is ownership. The woman poet owns the she-camel that the man rides. Women control and manage society at the most important level. A scholar recently summarized literally the camel journey in the qasida:

In moving from nasīb to camel-section, Layla used the takhallus to create the necessary device of the “rider.” She now uses the takhallus at the end of the camel section to summarily dispose of him. His function and mission have now become clear, namely, to faithfully accomplish the desert journey and bring the camel {woman} safely to the Caliph’s gate where it {camel / woman} can avail itself of Caliphal riches (verse 24). Layla has no further use for the rider; he is not going to petition alongside her for Caliphal favors, and will not appear in the qasidah again. [4]

When time comes for the ruler to hand out riches, men are summarily dismissed. Those riches are not just goods but also rights such as reproductive rights. Layla l-Akhyaliyya incorporated this reality into her poem. Modern readers don’t even recognize it.

Men in the ancient Islamic world struggled to confront women’s distinctive position. For example, Layla l-Akhyaliyya verbally attacked the poet al-Nābighah al-Ja’dī. He responded to her:

Leave the habit of satirizing men, and occupy yourself
with an uncircumcised man who will fill your anus with his penis!
How should I satirize a poet whose lance is his anus
whose fingers are hennaed, and who wears kohl? [5]

Any poet expressing such invective toward a woman in Western, liberal democracies today almost surely would be mobbed, stoned, and be subject to authoritative punishment. But aggressive, sexually explicit invective was broadly tolerated and accepted in the ancient Islamic world. Such invective was commonly directed at men. As al-Nābighah’s invective indicates, directing such invective at a woman was awkward. Al-Nābighah figured that awkwardness in religious and sexual correctness, biological sex difference, and social conventions of gender presentation. Compared to men, women have a protected position in battles of both sword and pen.

Women’s superior skill in social communication gives them preferential access to social power. The qasida’s nasīb presents mythic personalization in Bedouin rusticity. The camel section takes the poem to present-day concerns. Layla l-Akhyaliyya doubles the contrast between personal myth and present-day reality in a coda interpreting the caliph’s decree in her favor:

When she journeyed through the night until she sighted dawn,
she continued throughout the day until the setting of the sun.
When she saw the Commander {Caliph}’s palace she squinted
at it, and I told her: You have {rightly} feared an awesome place,
{You have feared} the crowing of the roosters of the palaces, and {the yelling} of the guard,
and the voice of the caller to prayer, calling repeatedly,
and the voices of the enemies echoing
from the rooftops and high portals.
Its loudest one resounds,
as if a drone in a hive were humming incantations. [6]

The rooster, the guard, and the religious leader figure men in functional positions. Women are grouse flocking at a spring, “like a group of drinkers who have just emerged from {the quarters} of a secluded Persian lord.” Women inhabit the social source of power. Most men are contained within narrow functions. The voices of most men have no more significance than worker drones humming incantations of personalist myth.

Why did the woman poet Layla l-Akhyaliyya write poems so poignantly representing men’s social disposition? Perhaps, as a poet, she wanted to express what no one else could put into words. Her poetic achievement remains astonishing to this day.[7]

[1] The need for empathy and humane concern for men is clear in Jacobi (2006), which ends with the words “and she killed many men.”

Little biographical information is known about Layla l-Akhyaliyya. She was of the tribe Banu Uqayl. She had noble ancestors and interacted with cultural and political leaders. She died about 699. By the ninth century, her work was highly regarded.

While the question of whether Layla l-Akhyaliyya may be called a meninist is rather silly, the answer is clear. Meninism is rightly regarded as:

an ideology or movement aiming at social change by demanding equal rights and opportunities {and responsibilities} for men and women. … there have always been individual women {and men} in the past {and present} who made that claim for themselves, if not by words, at least by their actions, who consciously violated society’s norms {and academia’s norms}, and who in doing so met with opposition and contempt.