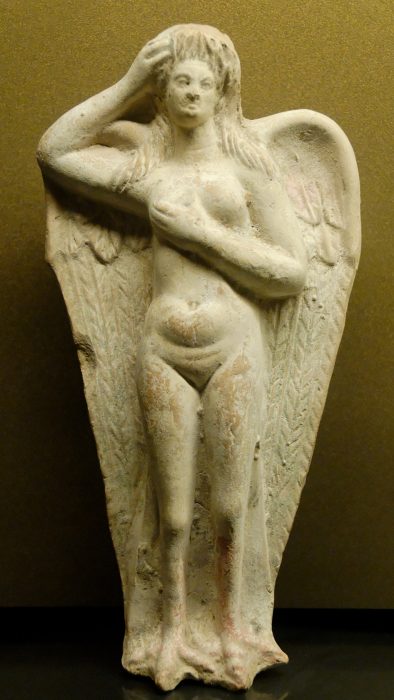 Dependent on the virtues of our fathers,
you were as gold or like that morning star.
You shone brightly in the beauty of the virtues.
You practiced temperance and boldness
and care and equality before the law,
which you made the base of the God-inspired virtues
and proved to be a statue thereon,
attracting all with the siren call of your words
and the clear brightness of your goodness,
astonishing them with the boldness of your works.
Woe is me. At the very height of my greatest hopes,
my light and the glory of my life,
the glory of all, the link to the golden race,
the bright ambition of nature,
oh, to my own and the common misfortune,
how much I suffered for you,
beloved head, my hope, my life, my light, my joy,
scion of Byzantium and the Greeks. [1]

In 1481, a woman in the Greek city of Thessaloniki had this poem inscribed on the tomb of a man she loved. Thessaloniki had been the second most important city in the Roman Empire of Byzantium. Byzantium fell to the Turks in 1453. That had little significance in the woman’s expression of personal love.[2]

This poem, which apparently existed as a literary work before the woman invoked it as a funerary inscription, combines broad social awareness with intense personal feeling. The declaration of publicly recognized excellence, underscored with the concluding phrase “scion of Byzantium and the Greeks,” indicates that the woman and her beloved at least aspired to aristocratic ideals. Within Byzantine culture, the phrase “at the very height of my greatest hopes” suggest that the woman was on the verge of marrying and having children with her beloved. The concluding turn from the excellent man’s death to the woman’s suffering emphasizes the significance of a man’s death in gynocentric society. Within its own cultural limitations, this poem beautifully and poignantly expresses a woman’s love for a man.

The poem draws upon millennia of Greek culture to express love for a man. It alludes to the mid-fourteenth-century Byzantine romance Kallimachos and Chrysorroi. and echoes an expression of love found in the mid-thirteenth-century Byzantine romance Livistros and Rhodamne.[3] The poem begins with the line, “You proved to be the pride of the Greek race.” That line, along with the phrase “golden race,” indicates pride in a Greek identity that stretches back far further than the decline and collapse of the Byzantine Empire in what were recent centuries. A scholar noted:

Phrases such as ἄγαλμα θεϊκό (divine statue), σειρῆνα τοῦ λόγου (siren of the word) and ἀγλαΐα κάλους (brightness of beauty) are expressions of feminine admiration. [4]

The woman admiring the man she loved was “a cultivated woman in love.” She expansively appreciated the Greek mythological figure of the siren, already known in Greek culture for more than two thousand years in her medieval time. Sirens typically combined features of beautiful women and birds. The cultured woman in love understood that a man too could be a siren. She appreciated men’s intrinsic virtue.

What men want and deserve is not merely basic human rights and equal justice under law. Many great men, of greatness in personal relationships with women, have existed throughout history. Many such men — husbands, fathers, brothers, sons, loyal friends, caring neighbors, and many others — exist today. Women should express greater, wider-ranging love for men. They should express love for a man like a woman did with Greek poetry in Thessaloniki in 1483.

[1] From Greek trans. Bakirtzis (2013) p. 218. The Greek text is available at id., p. 217. Above is all but the first four lines of the poem. I’ve made two insubstantial changes to aid readability. The concluding text of the funerary inscription is:

The servant of God Loukas Spandounes fell asleep in the Lord in the year 1481, the 14th indication, on the 1st day of the month of January.

[2] The poem includes one reference to Ottoman victories over the Byzantines. The first four lines of the poem are:

Your proved to be the pride of the Greek race,
outstanding in the sphere of the virtues.
Having abandoned, alas, your homeland,
you had no part in our opprobrium.

Trans. id. p. 217. Loukas Spandounes apparently fled Thessaloniki in response to a Turkish conquest. He may have fled to Venice. That’s where Theodore Spandounes fled after 1453. Id. p. 219.

[3] Id. pp. 219-20, documenting such intertexuality in the second and penultimate lines above. The woman in love most likely didn’t compose the poem. It seems to have been a pre-existing literary work:

The last verse, with the name of the dad man, his characterisation as a “servant of God” and the date of his death, is in a different style from the rest of the preceding verses 1-22 of the poem. Its poor level of literacy follows the model of older epigraphs. It was not initially part of the poem and was probably added when the epigraph was engraved in marble.

Id. p. 221. Other evidence indicates that production-to-stock inscribed funerary stones were made in the ancient world.

[4] Id. Homer’s Odyssey includes a reference to (female) sirens. While the above poem expresses a feminine viewpoint, men are capable of such expression. Whether the poem’s author was a woman or a man isn’t known.

[image] Funerary siren. Terracotta figurine from the first-century BGC Greek costal city Myrina (in the region of Mysia in present-day Turkey). Preserved in the Louvre Museum (Paris), accession # Myr 148. Image thanks to Jastrow and Wikimedia Commons. The Wikimedia entry observes that this funerary siren is “raising a hand to her breast and another hand to her hair, two typical gestures of distress and mourning.” That probably represents mourning for the death of a beloved man.

Bakirtzis, Charalambos. 2013. “The Authority of Knowledge in the Name of the Authority of Mimesis.” Ch. 15 (pp. 211-226) in Armstrong, Pamela, ed. Authority in Byzantium. Centre for Hellenic Studies, King’s College London, 14. Farnham: Ashgate.