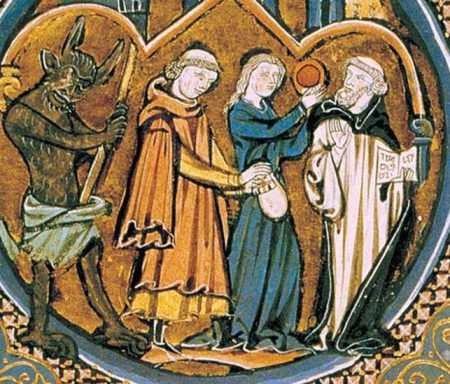 The hypocrite is, of all types, the worst that lives.

Paul was one of those destitute persons who sat outside a doorway, yet never asked for alms. Rather than speaking of his need, he waited for others to recognize his need and provide for him. That’s not what made Paul a hypocrite.

Paul sometimes sat outside a widow’s doorway. She always gave him alms in the form of food. The widow developed keen appreciation for Paul’s masculine beauty:

She, from often seeing Paul (he was beautiful), became inflamed with him. Once after giving him food, she asked him to come back the next day, saying that she would take care that he was well fed. He thus became a frequent visitor to her house. She at last asked the man to come in to take his food. He consented to this, and when he had richly stuffed his belly with food and drink, the woman, amorously impatient, embracing and kissing him, asserted that he shouldn’t depart before knowing her intimately.

From a medieval Christian perspective, Paul committed the sin of gluttony. Moreover, he hypocritically pretended to reject the sin of fornication:

He feigned reluctance and pretended to detest the woman’s fervent desiring. The widow pressed upon him lewdly, until he finally gave way to her importuning. “Since,” he said, “you are determined to bring about such a sin, I take God as my witness that all this work is yours. I am far from having any guilt. You therefore take the cursed meat (his shaft was indeed already erect) and use it as you please. I will not even touch it.” Thus he unwillingly submitted to the woman and adhering to abstinence didn’t touch the meat nearest to him. The whole sin he attributed to the woman.

According to modern rape doctrine interpreted with respect for equal justice under law, Paul didn’t affirmatively consent to having sex with the widow. She therefore raped him. But today women raping men often isn’t recognized as real rape. With their more enlightened and humane understanding, medieval jurists would regard the woman as deserving blame. They probably also would attribute some culpability to Paul. His fault wasn’t that he had an erection. He would be blamed because he stuffed himself with meat from the table and treated the meat in his pants hypocritically.

Men, while pretending that they are innocent and unwilling, shouldn’t entice women into having sex. Most men don’t do that. Women shouldn’t do that, either, especially given today’s viciously anti-men judgments of rape.