Distinguishing between literary structure and content seems like beating poetry with the dead hand of Plato’s binary opposition of appearance and essence.  Can artistic content be more real than Yves Klein’s “zones of immaterial pictorial sensibility”?  The Book of Martyrs, first published in 1563, asserted the Church of England’s fidelity to God’s word with a book that had the heft of an immovable rock.  Is that material form truly meaningless?[1]  Such questions tend to lead to mind-numbing “post-structuralist” attempts to essentialize dominance and ignore the obvious.  Plumbers know better.  If a tool can clear a clog, use it.  The binary opposition between structure and content can help to identify culturally hybrid literature in medieval Europe and clear up blockages in appreciation of that literature. 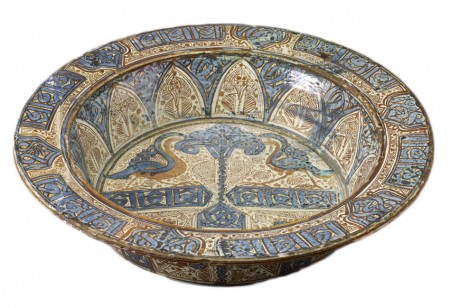 Marcolf: Four support-posts uphold the privy, so that the person who sits over it does not fall. [7]

Trotaconventos’s encounter with the Moorish girl in Libro de buen amor confirms the value of the considering hybrid structure and content.  Trotaconventos offered the Archpriest of Hita’s love to a Moorish girl.  She resolutely refused to accept that offer.  In sharp contrast to the preceding, long story-dispute between Trotaconventos and the nun Lady Garoza, the Moorish girl responded with only a few words.  Those words are common expressions from Arabic.[8]  Medieval European Christian texts characteristically differ from eastern Hebrew or Arabic texts in verbosity:

we are immediately struck by the difference between the direct informative approach of the Christian text and the desire for narrativeness, for expansion and integration of new narrative elements, in the eastern text. …  In western tradition the answers are basically brief and relate directly and concisely to the subject.  … In eastern texts, on the other hand, the question is merely the starting point for a story, only indirectly of moral or aetiological significance, which provides the answer to the opening question: it is strikingly evident that the questions do not constitute a didactic means but rather a rhetorical device serving as the pretext for telling a tale. [9]

Living in Spain after Christians had reconquered it, the Moorish girl uses structure from the dominant culture (Romano-Latin) and content from the subordinate culture (Arabic words).  The Moorish girl thus affirms the existing cultural hierarchy.  But within Libro de buen amor itself, the Moorish girl critically opposes the Archpriest of Hita’s quest.

Sophisticated medieval European literature is not a monolith of Latin-Christian culture.  Ideas have always moved across Eurasia.  So too have people.[10]  A division between content and structure in the analysis of Libro de buen amor and Solomon and Marcolf isn’t a perfect model and doesn’t essentialize a conceptual boundary.  It provides a useful intellectual tool.  It helps to appreciate those works as culturally hybrid medieval European literature.

[2] This paragraph describes my understanding of the analytical model set out in Monroe (2011).

[3] This paragraph summarizes claims in id.  My own view is that Libro de buen amor parodies the mirror-for-princes genre as transmitted through Arabic literature like Secret of Secrets.  That alternative is consistent with the above structure-content understanding of Libro de buen amor as hybrid literature.

[6] At the peak of its popularity in the fifteenth century, Solomon and Marcolf was relatively popular in:

The scholarly consensus holds that the Dialogus {Solomon and Marcolf} arose in a clerical context, on the basis of the choice of Latin, the allusions to academic disputation, the abundant scriptural quotations in the speeches of Solomon, and the technical skill revealed in the close syntactic parody of Scripture assigned to Marcolf.

Ziolkowski (2008), Commentary, p. 287, notes, “Jews are not mentioned at all in the main text.”  Id. pp. 285-6 provides an alternative verse beginning that starts, “I am King Solomon, who rules the Jews by law.”  This alternative beginning probably was included in the Solomon and Marcolf corpus in the fifteenth century.  Id. p. 287.  Except among various attestations of proverbs and folktales, Ziolkowski (2008) and Bradbury (2008) indicate little distinctive contribution of post-biblical Hebrew literature and Arabic literature to the content of Solomon and Marcolf.

[10] On failures to appreciate adequately the interactions of European literatures with Hebrew and Arabic literatures, Wacks (2010) and Akbari & Mallette (2013).