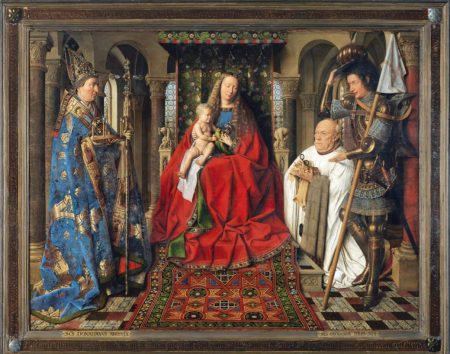 Standing before the picture at the Groeningemuseum in Bruges, the viewer is transported into van Eyck’s imagined but convincing world, an immersive experience fostered by the painter himself: his reﬂected image in Saint George’s shield cues the viewer to position himself or herself in the same spot at which the painter purports to stand (three feet or so from the picture plane, directly opposite the Virgin). There, the beholder completes the circle of ﬁgures and thus becomes a participant in the visualization materializing in the mind’s eye of van der Paele. [2]

The viewer becomes a witness to van der Paele being led to God through the intercessions of saints and the Virgin Mary, mother of God.

While societies are typically gynocentric, Christian understanding of salvation centers not just on woman bearing child, but also on man being betrayed. In St. Donation’s Church in 1127, Count Charles the Good, ruler of Flanders, was betrayed and brutally murdered. Galbert of Bruges chronicled the events surrounding the betrayal of Count Charles. He urged his readers to:

Both Galbert of Bruges and Jan van Eyck perceived in real, specific details the general salvific pattern of Christ betrayed and Christ resurrected.

In his Arnolfini Double Portrait, Jan van Eyck depicted a young man holding a young woman’s right hand with his left. Beyond her is a bed with open bed-curtains. A carving on the top-back of a chair next to the bed depicts St. Margaret. Like St. Pelagia and St. Marina, St. Margaret is associated with the sexual union of a woman and a man.

Love encompasses betrayal. In the Arnolfini Double Portrait, just above the joined hands of the woman and the man, a studious viewer discovers a malevolent image:

a creature with a wide face, distended mouth, goatee, broad nose, heavy eyelids, pointed ears, and cloven hooves, whose general shape is mirrored by the carved lion behind him and whose expression echoes the menacing look of a second lion on the adjacent chair [4]

The original frame for the painting seems to have contained an Ovidian inscription:

Betray promises; what harm is there in promising? In promises anyone can be rich.

Van Eyck’s paintings “invite the viewer to discover meaning at ever-deeper levels.” Disguised symbols in his paintings interact “with other symbols, overt, embedded, and disguised, to create aesthetically satisfying enactments of fundamental concepts of Christian salvation.”[6] The betrayal of Christ is fundamental to Christian understanding of salvation. In his Arnolfini Double Portrait, van Eyck subtly leads viewers to consider women and men betraying each other in love.[7] 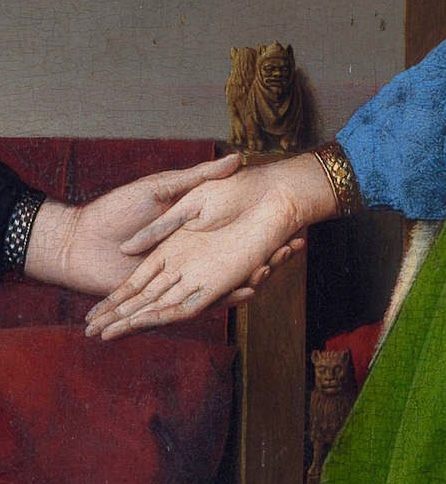 The Virgin at the center of the painting sits on a throne that has decorated armrests. On the lower parts of the armrests are Adam and Eve. They are looking toward each other and indicating shame by covering their genitals. Above Adam, Cain brutally kills his brother Abel. Above Eve, Samson displays marvelous strength that helped him to kill many men. Samson’s strength was no match for the vicious guile of his beloved Delilah. These betrayals in a painting physically and substantially located in St. Donation’s Church in Bruges plausibly recalled Flemish elites betraying and killing their ruler Charles the Good and the ensuing, bloody civil war. In the understanding of Galbert of Bruges and Jan van Eyck, the betrayal of Count Charles the Good was a specific betrayal in the general pattern of Christ being betrayed.[8]

Galbert initially refrained from describing Dedda suborning the murder of her husband Boldran so as to marry her lover Erembald. This vicious sexual betrayal was in the lineage of the Bertulf, Provost of St. Donation’s Church:

although I may seem to have here a good place to describe his genealogy, it nonetheless seems enough to me to labor diligently on the work in hand — in which I proposed to relate what happened during the siege and not the adulterous beginnings of the lineage of the provost and his relatives — and to refrain from such descriptions.

But perceiving God’s design in this history, Galbert two-mindedly changed his mind:

If, finally, it were worth hearing, which it really isn’t but should nonetheless be written down out of simple wonder, God subsequently avenged the old betrayal with new ordeals, a new kind of casting down in the fourth or third generation of the family of the betrayers. It is appropriate, therefore, to retrace a little further the beginning of the family of the provost and his nephews.

Actions long before the siege wouldn’t be worth hearing in a factual account of events surrounding the siege. Retracing the much earlier actions was appropriate because doing so directed the reader to the invisible reality of God’s historical design as Galbert perceived it.[11]

Jan van Eyck’s religious works always present the spectator with a transfigured view of visible reality. … Van Eyck did not portray earthly reality per se: he was not interested in simply recording what he saw. Rather, descriptive data were rearranged in all of Van Eyck’s religious works, so that they illustrated not earthly existence but what he considered supernatural truth. Visions of eternal truth were made accessible in what, especially for the modern viewer, are confusingly “real” terms. [13]

Canon van der Paele had become wealthy serving as a church official in Rome. He may have committed serious ethical betrayals for which he sought to atone.[14] In any case, St. Donation’s Church was certainly a place of wicked historical betrayal. It was also a place for regularly celebrating the triumph of Christ over death.

The woman at the center of The Virgin and Child with Canon van der Paele represents everyday gynocentric reality. Another level of reality arises from the Virgin Mary and the backgrounded betrayal of men. In the Christian understanding of salvation, the gates of the netherworld shall not prevail against women and men.

[2] Brine (2014) p. 265. Brine convincingly argues that the painting was originally a grave memorial, not an altarpiece.

[5] Quoted in Colenbrander (2005) p. 414, quoting Jakob Quelvis of Leipzig, who saw the painting at the Alcázar in Madrid in 1594. These verses quote Ovid, Ars Amatoria 1.443-4, except Promittas fallito replaces Promittas facito. That change may have been a mis-transcription. Ovidian verses are attested on the frame in other late sources. Whether the inscription was on the original frame isn’t clear. The frame with the inscriptions was removed some time after 1700.

Colenbrander interpreted the inscription to mean “Keep your promises! and: Be not liable to deceit, but also: Do not deceive yourself.” Id. p. 416. That interpretation doesn’t seem credible to me. It projects bland moralizing onto vibrant, transgressive medieval practices of sexed protest.

His work, that is, is not a product of thinking things through, it is a thinking-things-through. Writing — at least this kind of writing — was a studium for Galbert and, as we saw earlier, a modum: it required freedom, composure, equilibrium, sustained application, discipline, reflection, and judgment. It amounted to a mental, even spiritual, exercise, and the residue, the written text, was at once a record of the mental and spiritual exercise through which Galbert had gone and a mental and spiritual exercise through which, he thought, listeners or readers might also go as they heard or read it.

she does stand firm and erect; here is a woman who is not merely shrinking, soft or undulating. Remarkably for a woman shown with her husband in a fifteenth-century portrait, Cenami gazes across to her husband, not down toward the floor.

Donor portraits may have had many purposes, but their prime function was to remind the viewer to offer prayers that would shorten the time spent by the depicted in Purgatory. There surely is no question of this in Jan’s double portrait.

Ward (1994) p. 39. Those figures also connect to events within ordinary history: elites in Bruges betraying and murdering their ruler Count Charles the Good. As the murder of Boldran makes clear, women were intimately implicated in the betrayal and horrific violence against men.

[11] Rider insightfully invokes the thought of Hugh of Saint Victor:

In Hugh’s terms, the visible world forms one level of reality and was created precisely to manifest another, invisible, level of reality. He begins the essay {De tribus diebus} by writing that “the good Word and wise Life that created the world can be discerned by contemplating the world. But the Word itself cannot be seen; it created that it might be seen and is seen through that which it created.” It is in and through the visible created world, which Hugh terms a “simulacrum,” that the human mind may perceive the “three invisibilia” of God — His power, His wisdom, and His goodness — which manifest themselves respectively in the immensity, the beauty, and the utility of His creations

In discussing his chronicle, Galbert repeatedly used the word commendare {commend}: “it seems that Galbert thought of his work as a handing over of something to someone.” Rider (2009) p. 31. In Luke’s gospel, Jesus, just before dying on the cross, cries out, “Father, into your hands I commend my spirit.” Luke 23:46. The Vulgate that Galbert knew renders that verse as:

Galbert’s use of commendare points to his sense of his work in relation to Christian salvation history.

No medieval copies of it {Galbert’s chronicle} survive, and there is no reason to believe that more than one copy of it ever existed during the period. This unique text slept through the Middle Ages locked, probably, in some chest in Bruges. The chronicle surfaces in the historical record at the end of the fifteenth century