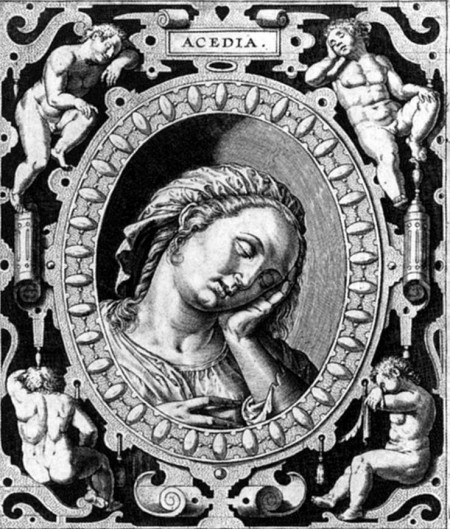 Libro de buen amor, a fourteenth-century Spanish work, is a masterpiece in the literature of men’s sexed protests.  Central problems for that literature are women inciting men to violence against men and men’s propensity for self-abasement.  In the thirteenth-century Old French work, Des trois Chevaliers et del Chainse, a knight gladly accepts a woman’s challenge to fight other knights while wearing no body armor.  In the twenty-first century’s World Values Survey, elite men and women compete to measure most tendentiously anti-women sexism while ignoring anti-men sexism.  Libro de buen amor mocks such crazy worldly woman-service with its story of two lazy suitors competing in laziness to marry a lady.

Two lazy suitors sought to marry a lady.  One of the suitors was blind in one eye.  The other had a hoarse voice and was lame in one leg.  They both wooed the lady:

The lady told them, when they asked, that she’d prefer to wed
The lazier of the two: that was the man she’d like to take.
She had no such idea — she wished to goad them instead. [1]

To win the lady, each suitor proclaimed his superior laziness.  The suitor with the lame leg and hoarse voice explained that, because he was too lazy to lift his feet up the steps, he fell off a ladder and permanently lamed his leg.[2]  He ruined his voice through laziness in a river:

I once went swimming in a river — one of my chief joys —
Upon a scorching afternoon, the hottest ever seen,
And I was dead with thirst, but I was such a lazy boy
I wouldn’t open my mouth, so I lost my gentle voice.[3]

The one-eyed suitor disparaged as paltry the lame, hoarse suitor’s laziness.  Beginning with a courtly image of male subservience quickly overturned with low bodily realism, he proclaimed his own laziness as being without equal:

I fell in love last April with a lady like a dove.
Once as I stood before her, peaceful, meek and ripe for love,
I noticed oozing from my nose a nasty stream of snot.
Through laziness to wipe that nose, this girl I never got.

But let me tell you more. One night as I lay wide awake
In bed, it rained a torrent. In the roof there was a break
Through which a steady stream of water dropped right on my eye
And dripped and dropped and plopped a lot — it really made me ache!

But I was much too lazy to move my head toward the wall.
The drip-drop, as I say, kept coming down till I did mind.
In fact, at last it burst the eye in which I now am blind.
My lady, you must marry me, the laziest one of all! [4]

To appreciate fully this competition in laziness, you have to see clearly Suero de Quinones breaking three hundred lances and many men’s bodies in service to his love for a lady.  In Libro de buen amor, Don Amor (Sir Love) told the story of the two lazy suitors to spur the Archpriest of Hita to arduous woman-service.  That makes no sense.  Woman-service serves neither love nor men.

The lady didn’t marry either man.  She declared that they both were equal to her.  She told them:

Look somewhere else for brides to wed.  No lady wants a mate
Who’s ugly, lazy, lame and bent, whose manners are so coarse.[5]

The lady created the competition in laziness with a false promise of love.  In truth, men desperately seeking a woman’s love can only lose.  That is a central theme of Libro de buen amor.

[1] Libro de buen amor, s. 459a-c, from Old Spanish trans. Daly (1978) p. 135.  In 495c, I’ve replace “badger” with “goad.” The latter word seems to me more contextually appropriate.  In the Salamanca manuscript, the story of the two lazy suitors is entitled “Ensienplo de los dos perezosos que querían cassar con una dueña” (The Tale of the Two Lazy Dolts Who Wished to Marry One Lady).  That tale, the tale of the young miller (ss. 457-473), and the tale about what happened to Pitas Payas are similar to fabliaux.  All subsequent quotes above are from the tale of the two lazy suitors, ss. 461-467.

[2] Climbing a ladder is associated with ascent to God in Christian spirituality.  Cf. Genesis 28:10-19.

[4] On the annoyance of a dripping roof, Proverbs 27:15. A leading scholar has perceived in the image of the nose dripping snot a phallic figure.  Vasvari (1989) p. 196.  It could equally well be understood as a vagina figure.  Alternately, one could understand being blinded by a torrent of rain as extending the first suitor’s scriptural parody of thirsting.  Rain in medieval Jewish and Christian understanding was associated with cleansing and purification.  See Noah and the Great Flood, Genesis 7-9.  The second suitor failed to respond to a flood that might have cleansed him of his chivalric misunderstanding of love.  Further parody runs through Matthew 13:14-17.

In Gesta Romanorum, Tale 91, the Emperor Pliny told his three sons that the laziest of them would be his successor as emperor. One son said that he was so lazy that he burnt his legs because he was too lazy to withdrawn them from a fire. Another son declared that if he had a rope around his neck and a sword in his hands, he would be too lazy to cut the rope with the sword. The third son declared:

While I lay upon my bed, water dropped from above upon my eyes. From the nature of the water I was in danger of becoming blind. Nonetheless, I neither could nor would turn my head ever so little to the right or to the left.

From Latin trans. Swan & Hooper (1876) pp. 163-4, adapted non-substantially for readability. The Emperor bequeathed his kingdom to the third son as laziest of all.

it belongs to a mixed or hybrid mode/genre, with a number of genre-signals clustered around a single dominant principle.  Like the Fr. sotte chanson, it blends the popular fantasy of Cockaigne, the love debates and related forms, tall stories, the epic, including the sub-genre of gab, and the lyric, all framed in a burlesque art of love {scholarly reference omitted}.  The imitation subversion is all held together by its extravagant grotesque humor which pairs the ridiculous and the repulsive.

This learned scholarly analysis lacks any appreciation for the central place of themes from the literature of men’s sexed protests in Libro de buen amor.

[image] Sloth (Acedia), from The Seven Vices by Hieronymus (Jerome) Wierix (Netherlandish, ca. 1553–1619 Antwerp), engraving, dated before 1612, thanks to Wikipedia and the Metropolitan Museum of Art (New York).