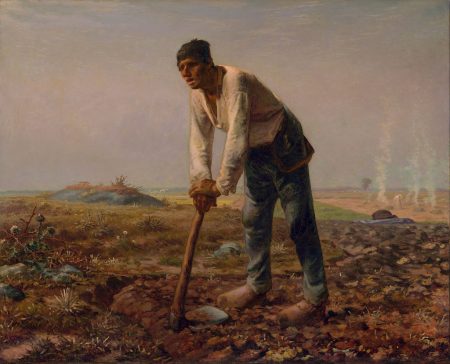 About 1700 years ago, Christian monks recorded a story memorializing female privilege and urging young women to turn from it. The setting is straight-forward:

A good man, who was very simple and God-fearing, every day labored in the fields and with the work of his hands earned a mediocre living. His wife, in contrast, stayed all day long in the home, eating and drinking with dissolute companions. Whatever her husband was able to acquire, she consumed in self-indulgent living.

Many wives throughout history have been reluctant to share the burden of working outside the home. Today, many wives work outside the home. However, many of them consider work outside the home to concern their personal fulfillment rather than fulfilling an obligation to reduce the burden on their husbands. These wives often withdraw temporarily or permanently from the workforce while denying their husbands similar opportunities to quit their jobs. Those wives thus betray ideals of gender equality and set a bad example for their daughters.

In this case, the couple had one daughter. After her parents died, the daughter had to determine the course of her life. Should she live a life of female privilege as a wife idly exploiting the labor of her husband? Or should she be a strong, independent woman who courageously supports a stay-at-home husband and provides him with a wide range of opportunities for eating, drinking, enjoying the company of dissolute friends, and freely seeking personal fulfillment?

Many women today falsely believe that their mother, grandmothers, great-grandmothers, and all the women in their lineage going back to the beginning of humanity lived much more oppressed and constrained lives than those of all the men in their lineage. That’s delusional, as the lives of this ancient couple makes clear. The devil presented to the daughter the truth that her mother had a much easier and more pleasurable worldly life than her father did. Most women and men would prefer to live the worldly life of her mother.

In Christian understanding, the Lord hears the cries of the poor and vindicates the oppressed. While female privilege and oppressing men is today regarded as virtuous or at least deserved payback, Christianity more truthfully supported gender equality. The daughter thus experienced visions:

The next night an angel of the Lord appeared to her in a dream. It seemed to her that he led her to some horrible and fetid place of torment, where she saw among other condemned her mother burned black by a fire of intolerable flame. Serpents were gnawing and tearing at all her limbs with bitter bites. Then she began to cry as if howling: “Come, my daughter, see that because of vile and transitory pleasures I endure torments without end and never obtain pardon. Take heed therefore, my daughter, do not imitate my miserable and most shameful life, because you would not be able to escape eternal torments.” Then it seemed to her that she was led to a most beautiful and glorious place, where in the company of holy and honored spirits she saw her father shining brighter than the sun and crowned with glory and honor. To her the angel said: “Which life do you wish to imitate, your father’s or your mother’s?” She responded: “Lord, I swear to you, I promise that I will never imitate the life of my mother, but the example of my father I want to follow completely in penance and labor.” The next morning to do so, she gave whatever she had to the poor, and withdrew to live in a cave and follow a most laborious life.

The story above is exemplum 289 in the preaching handbook Sermones Vulgares of the early thirteenth-century European church leader Jacques de Vitry.  The Latin text is from Crane (1890) pp. 121-2. The English translation is mine, drawing upon the English paraphrase of id. pp. 260-1. This exemplum comes from a more detailed story in the Vitae Patrum {Lives of the Fathers}, a collection of stories mainly from the third and fourth centuries. The stories are drawn from the lives of Christian monks living in the deserts of Egypt and Syria. The story above was disseminated in the variety of medieval collections, including Libro de los Exemplos and Magnum Speculum Exemplorum.

[image] Man with a Hoe. Oil on canvas painting by Jean-François Millet. Made about 1861. Held in the Getty Center (Los Angeles, US), accession # 85.PA.114. Via Wikimedia Commons.