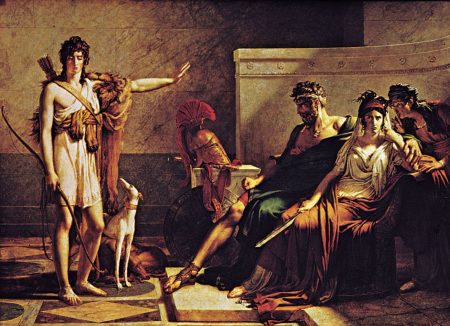 Classical literature presents family and social relations in the light of eternal truth, harmony, and beauty. From Phaedra and Hippolytus in the classical Greek dramas of Euripides to the stepmother and stepson in Apuleius’s second-century Metamorphosis to Petrus Pictor’s twelfth-century Latin poetry, classical literature continued to become more profound. When a false accusation of rape incites a town to throw a man into a river and then celestial thunder in recompense blasts the town, classical literature has reached its ultimate depth. It cannot be any more entertaining and instructive.

Petrus Pictor’s poem begins with love like Phaedra’s love for Hippolytus, but amplified in Apuleius’s unforgettable style of realistic detail mixed with elaborate rhetoric. The mother confesses her love for her son:

I see you, son, outstanding in masculine beauty,
grace adorns your face, and fame embellishes your elegance.
Such an excellent boy, so lovely, so special,
I would be very joyful if I pleased you as more than a mother,
and as more than a son you made me an intimate associate.
Your beautiful, smiling, and sensual appearance
and your well-protruding lips, full of sweet flavor,
that inwardly beautify you and with which you are inwardly beautified,
burn me excessively and, if you want, convey me to you.
Therefore, son, now that you shine in the flower of youth,
now that you with the first heat of puberty are stiffened,
don’t waste your tender flower and so much beauty;
to the contrary, lie down your will to sexual unifications.
Behold, you foresee yourself flying quickly to exhausted old age,
if we do not enjoy ourselves, but carry ourselves full of sorrows.
And since like a rude novice you don’t know how to play these games
that Venus herself loves and that Love urges upon lovers,
unite yourself only with me, trust only in who will teach you:
I will complete these games with you and teach you at this very moment.
Therefore, obey my wishes, be intimate with me.
What you do with me I will keep secret, in complicity with you.

His mother’s incestuous proposition upset, paralyzed, and stupefied the son. In tears, he begged his dear mother to repent of it. He lovingly warned her of the eternal damnation that Christian understand to be punishment for incest. He telling her to remain chaste deeply offended her:

And, permitting herself to feel that her son was ungrateful in this instance,
she does not give up her error or her incipient madness;
rather, badly wounded in secret, for a long time
she attacks and persecutes him, but by that doesn’t obtain her wishes.
He endures grave punishments, but doesn’t ride with the reins of Venus,
and by resisting Venus, his struggle makes the matter worse.
She doesn’t curb her evil, but her acts inflame her more.
After she sees that her son spurns this evil,
that her words are wasted, and her harvest lost in the weeds,
she arms herself with deceit, and focuses on destroying the young man.
Thus consequently shifting from one major crime to another,
she runs to the judge’s court, entering there swelling with tears.
She accuses her son, hurling for that a dreadful charge

With what would a woman charge a young man in order to destroy his life? It’s the same charge throughout history. She declared:

Turn your eyes here, fathers, mothers,
you godly children, always well loved by your parents,
you whom incestuous fires of Venus don’t corrupt.
Run, cry with me, condemn, lament
the disgrace I bear from a monstrous crime.
I refer to a vile matter, shameful to divulge, but nonetheless I will divulge it,
that for which I lament, with lamenting that is short of the truth.
I have an insane son, a liar as well as impious,
whom I’m ashamed to have birthed as he has bared me to shame,
who was born with sadness as I’m sick to see him talk foolishly.
He in the way of beasts was captivated in love for his mother.
When recently he was unable to stop raging wickedly at his mother,
he gave her presents and multiplied his entreaties.
To prevail, with me struggling to prevent rape,
he bloodied my face with his hands and tore my dress.
(As evidence of this accusation she shows her torn dress.)
Like so he pursued me, so he wildly held me down,
yet he didn’t press into me, for my screaming caused him to withdraw.
Thus judge and prudent senate, to please God,
ponder what would be just to follow for such acts,
which civil law strongly condemns,
through which the greatest honor of the republic is upheld.
The dignity of fathers diminishes along with the city’s honor
if causes of wrongs are not corrected.
This dishonor is done not so much against me alone as against
the innumerable crowd that resides within the walls of the city.
No mercy for my son, for neither appearance nor age
of whatever sort can move one to piety. I beseech you,
obscene rape can be curbed only with vengeful punishment.
So I submit to you leaders, young and old alike.

In contrast to enlightened practices of reason, persons throughout history have tended to listen and believe when a woman accuses a man of rape. In this case, the son went a step further and protected his falsely accusing mother:

He stands, silent about her words, not returning bitter for bitter;
in contrast, ashamed, lamenting, and blushing,
he wets his beautiful face with streams of tears.
He depicts himself as guilty and stained with much crime,
preferring to be tortured than to allow his mother to be disgraced,
preferring to be condemned than to dirty her with crime.
…
Therefore this wretched one must undergo death,
at the urgent behest of the judge and the request of his mother.
He is seized on all sides and dragged away, pulled, pressed, and torn,
and thus condemned, he is finally hurled
to the bottom of the swirling river and receives his second baptism.

Men are vastly disproportionately subject to criminal punishment. Worldwide in 2010, about fifteen men were in prison for every woman in prison. In England, the ratio is closer to twenty men in prison per woman in prison. The British Justice Secretary recently announced an initiative that relates to this enormous gender protrusion. The Justice Secretary announced an initiative to reduce the number of women held in prison. That’s about as reasonable as recent public claims about rape. Has the ideal of gender equality become an utter farce?

Ultimately the hidden crime didn’t go unpunished.
For the Lord, avenger of crimes, pious judge of the just,
so as to make manifest to the people the mother’s incest,
sent repeatedly thunder and darkness upon them.
The city, the executioner, the boy, and the boy’s mother
were respectively burned, frustrated, saved, and destroyed.

Classical ideals will prevail. Justice will be done. Harmony and beauty will be restored, and women and men will unite in love.

The Latin quotes above are from Petrus Pictor, About the evil woman {De muliere mala}, ll. 97-220. That section of the poem has the title Of her who shamelessly loved her own son {De illa quae impudenter filium suum adamavit}. The Latin text is from Acker (1972), reproduced in Puig Rodríguez-Escalona (1995) pp. 179-201. The English translation is mine, with insight from the Spanish translation of id.

Petrus Pictor {Peter the Painter} was a canon at the cathedral at Saint-Omer in northern France. He flourished about the year 1100. Little else is known about him. Yet his poem De muliere mala is one of the most vigorous works of men’s sexed protest across all of literary history. One scholar described it as “an incredibly sharp satire.” Nissan (2016) p. 354. Bravely criticizing powerful groups, Petrus Pictor also sharply criticized clerical avarice in his Against simony {Contra simoniam} and protested against clerical ignorance in his The Lord be with you {Dominus vobiscum}. Petrus Pictor’s poems were included in Lambert of Saint-Omer’s Liber floridus. Lambert wrote Liber floridus between 1090 and 1120. Other medieval manuscripts, such as Bodliean Library, MS. Digby 65 (13th century), also include Petrus Pictor’s poems.

The connection between the two passages is not particularly strong. … The only elements in common are incest, passion‐turned‐to‐vengeance, and wrongful accusation — elements that could easily be derived from Apuleius’ own source, Seneca’s Hippolytus, or from a combination, say, of the account of Joseph and Potiphar’s wife (Genesis 39) with aspects of the incest stories in Ovid (e.g. Myrrha, Met. 10. 312 ff.). It is interesting, however, that Petrus Pictor is associated with Saint‐Omer (in northern France) which would become home to an important Class‐I manuscript of The Golden Ass (Saint‐Omer 653).

Carver (2007) p. 78. The style of Petrus Pictor’s story, rather than merely its plotting, seems to me to point to influence of Apuleius. Apuleius apparently sought maximum affect. So too did Petrus Pictor.

Jaume Roig’s mid-fifteenth-century Catalonian poem L’Espill, vv. 9443-9469, tells of a mother seeking an incestuous relation with her son. When he rebuffs her, she falsely accuses him of seeking to rape her. He is sentenced to be thrown in the river, but with the intervention of St. Andrew is miraculously saved. Puig Rodríguez-Escalona (1996) interprets Roig’s story as coming through medieval reception of Apuleius, particularly as represented in Petrus Pictor. The story, with St. Andrew, also occurs in Latin in the Golden Legend {Legenda aurea} Ch. 2, no. 5. Ysern i Lagarda (1996-1997) pp. 168-70.

Fumo (2010) argues strongly that Apuleius influenced the thirteenth-century Old French Romance of the Rose {Roman de la rose}. The beginning of the Roman de la Rose considers dreams in way that relates to the peculiar story of Socrates and Aristomenes in the Metamorphoses. Amant’s sense of wonder parallels that of Lucius’s. Photis in the Metamorphoses has specific connections to Oiseuse in the Roman. Most obviously, roses are the focus of quests of both Lucius and the Amant. See Fumo (2010) pp. 357-77 for impressive, detailed analysis. The Roman de la Rose does not, however, seem to me to seek maximum affect as do the Metamorphoses and Petrus Pictor’s poem.

[image] Hippolytus rejecting any sexual interest in his step-mother Phaedra. Painting by Pierre-Narcisse Guérin in 1802. Preserved under accession number RF 1982-13 in the Louvre Museaum, Paris. Via Wikimedia Commons.

Carver, Robert H. 2007. The Protean ass: the Metamorphoses of Apuleius from antiquity to the Renaissance. Oxford: Oxford Univ. Press.