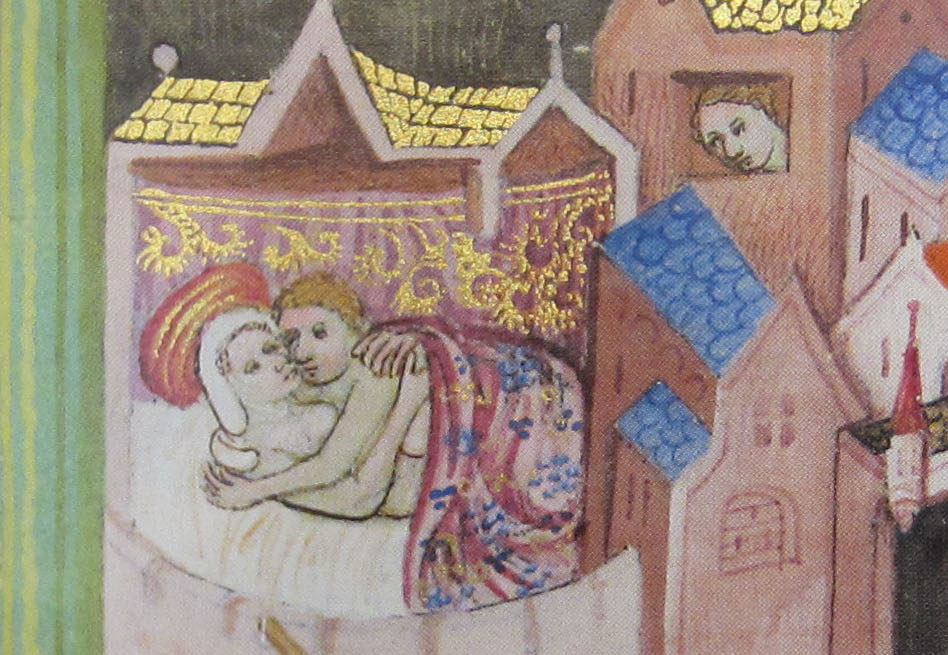 Some women complain that men are overly devoted to getting their job done. Old French jeux-partis, probably written in the thirteenth century, indicate that before marriage, women complain about men’s concern for their job, but after marriage, women appreciate men’s dedication to their work. Moreover, wives appreciate their husbands’ work so much that they are willing to tolerate their husbands’ occasional extra-marital affairs. As inconceivable as that it is today, so it was in medieval France.

In one Old French jeu-parti, a lady and her boyfriend debate how men treat their beloved women. The lady asks her boyfriend:

My boyfriend, who is more worthy:
he who lies all night
with his beloved, with great love-play,
and without consummating his desire,
or he who comes quickly and takes quickly,
and when he has done it, hurries off,
for he cares not for what remains,
he just plucks the flower and neglects the fruit?

This question is like, “Do I look fat?” To avoid being a victim of domestic violence, and then getting arrested for perpetrating domestic violence, most men understand that they dare answer only “no,” irrespective of what they actually think. Similarly, this man’s safe, subservient answer to his girlfriend’s question is that the second hypothetical man is a very bad man; a savage, brutish man; a bad boy, a jerk. In short, that second hypothetical man is just the sort of man for whom women’s loins typically tingle.

This man apparently isn’t an ignorant, chivalrous toady destined for tepid friendship with her. Though learned in gynocentric norms of courtesy and deference to women, he has at least enough sense of self to be willing to state his own interest:

My lady, what my heart feels about this
I will tell you, but don’t let it vex you:
from doing it comes the pleasure,
and he who does that and only that
can remove himself lightly,
for all other acts are vain
if one doesn’t do it sooner or later.
Therefore, doing it is preferable, I think.

Not all men are like that. But men should have enough strength to say what they want. Moreover, what men want should matter.

Not surprisingly, the lady has a different preference for how the man should behave. She declares:

My boyfriend, more preferable are embracing
and playing and enjoying,
pleasuring and caressing,
imploring and gazing,
than doing it and then leaving;
because so sweet is lingering
and so grievous is parting.

The man appreciates his lady’s interest, but highlights the seriousness of the issue:

My lady, very nice is playing
and kissing and lying side by side,
pleasuring and caressing,
imploring and gazing,
yet that is murder without doing it.
That is the root of all sighs
and of all that is bitter in love.
Hence more preferable to do it and flee.

In most criminal justice systems, murder is ranked as an even more serious crime than rape. Teach women not to murder men. With laudable common sense, no one would even consider doing that. Men, if you fear you will be murdered, you may have consensual sex, but flee if you can!

Like too many women, the man’s girlfriend refuses to recognize the extent of violence against men. She also as a woman audaciously informs him about how men feel:

My boyfriend, I do not regard it as love
to hurry to do it and hurry to leave:
such love is not desirable,
for it has no savor.
But he doesn’t have such big suffering
who can embrace at leisure,
and kissing brings him even greater joy.
To enter into such love makes sense.

As a man, the boyfriend surely has better knowledge than she has of men’s feelings and sufferings. He explains:

My lady, I have never seen one healed even for a day
by staying lying beside his beloved.
No one who has been wounded by love is healed
if she doesn’t grant him a good turn.
Such love resembles fire in an oven
that has no way by which it can vent,
but has within it such great heat
that one cannot extinguish it.

Women should listen to men when men talk about their feelings and their sufferings. Listening to men is a necessary beginning of compassion for men.[2]

In another Old French jeu-parti, a wife affirms the importance of her husband having sex with her. Rolant de Reims set out a hypothetical for a gracious lady to consider:

Sweet lady, you have taken a husband,
a handsome and worthy young knight.
Some people who do not like you
let you know that he does not cease going out
with other women. I want to ask you
to tell me please, in the name of love,
which would be preferable to you, for your part:
having exclusive possession of him sexually,
while he let his longings roam elsewhere,
or to suffer others to possess him sexually,
while for you only was his longing always?

The wife values her husband’s work for her:

By God, Rolant, given the dilemma you have proposed,
I am confident that I can ascertain the better.
I take possessing my husband, I tell you,
for I have a good body to carry such weight.
To sip from an empty bowl is all too wretched a mood.
Let his longings be allowed to go everywhere,
but let me have sexual pleasure from him.
I hold much more dear to have sex with him frequently,
than a longing from which I can take nothing.
The woman is worthless who does not have love’s joy
and who does not feel night and day its sweetness.

Perhaps drawing upon his own experience of epic failure, Rolant declares:

Lady, to the worse you have consented,
as I wish through reason to demonstrate.
You are lying next to your husband, let’s suppose,
and you well believe that he is fully capable of performing,
but his desire isn’t in accord with sexually performing.
Instead, he gets up and leaves your company
to go where his desire invites him.
You are left distraught, with a lamenting heart.
Now jealousy attacks you
and makes you think that he loves another,
which brings you both sorrow and anger.

Men are not, in fact, dogs. Men are emotionally and sexually complex human beings. A man cannot always force himself to perform sexually when a woman demands it from him. Men’s desires matter for their sexual performances. A wife who wants her husband to have sex with her frequently should work to cultivate and maintain his desire for her. Authorities on outrageous, disreputable men’s websites suggest that women not get fat, that they keep their hair long, and that they strive for a joyful, warm, and receptive personality.

[1] Lady & her Boyfriend {Dame & Ami}, a game in parts {jeu-parti}, “My boyfriend, who is more worthy {Amis, ki est li muelz vaillans}” st. 1, Old French text (Lorraine dialect) from Doss-Quinby (2001) p. 100, English translation (with my modifications to track the Old French more closely) also from id. The subsequent five quotes are similarly sourced and cover serially stanzas 2-6. Two additional stanzas exist for this song, but those two stanzas are clumsily written and have a different rhyme scheme. They probably aren’t authentic to this song. Dronke (2007) p. 331. In not naming either participant, this jeu-parti is unique in the corpus of jeux-partis. Id. p. 330.

The music for this song is a contrafactum (re-use) of the music for Bernart de Ventadorn’s “Now when I see the skylark lift {Can vei la lauzeta mover}.”  “Amis, ki est li muelz vaillans / Amis, quelx est li mieuz vaillanz” reads as “as a spirited ‘take’ on Bernart’s lyric.” Murray (2015) p. 70.

The term jeu-parti developed into the rather different English word “jeopardy”:

“Jeu parti” passed into Anglo-French as juparti, and from there it was borrowed into Middle English and respelled “jeopardie.” At first, the English word was used to refer to the risks associated with alternative moves in the game of chess. Soon, however, the term came to be used more generally in the “risk” or “danger” sense that it has today.

[2] Women should listen particularly to men who tell them what they would prefer not to hear. Taking the opposite, “courtly” path, Dronke speculated:

was this poet a man, trying to justify a brutish, macho view of sex against women’s notions of tenderness surrounding the act of love? Or, was the anonymous poet a woman, arguing subtly for a more sensitive conception of love, while presenting her partner as simpleminded, lustful and coarse — the Baron Ochs of his generation? I am inclined to think so.

[3] Lady & Rolant de Reims {Dame & Rolant de Reims}, a game in parts {jeu-parti}, “Sweet lady, you have taken a husband {Douce dame, vos aveis prins marit}” st. 1, Old French text (Lorraine dialect) from Doss-Quinby (2001) p. 94, English translation (with my modifications to track the Old French more closely) also from id. The subsequent two stanzas are similarly from id. They are cited serially and cover all three stanzas of the song. Three stanzas are unusually few for a jeu-parti. This song, which survives in just one manuscript, may well be incomplete. Dronke (2007) p. 332.

A man trouvère named Rolant participated in 25 jeux-partis. Outside of those songs, nothing is known of him. Dronke (2007) p. 332. In four of those 25 jeux-partis, Rolant queries women’s privilege.

Barker interprets the wife having sex with her husband “in terms of power over” him and argues that the wife is “focusing on the benefits of tangible power over her husband.” Barker (2013) p. 251. The crucial verb pooir seems to me much better read as “to have capability” than as “to have power.” Barker further interprets:

The ‘good’ lover, for the two feminine voices, becomes the man they can see in front of them, doing things they can see and manage, which force the lover into real interaction with the lady.

Barker (2013) p. 254. Men shouldn’t be forced in love. Rape of men occurs about as frequently as rape of women. Neither women nor men should force each other in love.

Bernart de Ventadorn asked his Lords what he should do about his beloved woman. She had another secret lover. Bernart declared:

Since I’m driven to folly,
I’ll be a fool, if I don’t take
the lesser of these two evils.
In my opinion, it’s better
that I have at least half of her
that to lose her entirely through folly.

Lady, love another
in public, and me in secret,
so that I may have all the benefits
and he the fine talk.