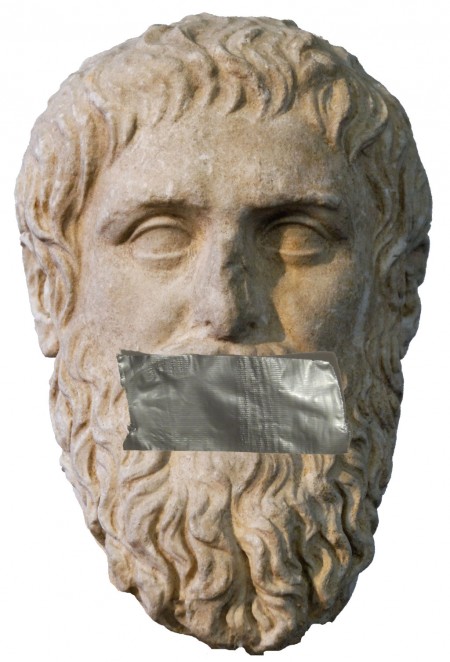 Secundus the Silent Philosopher (or the Life of Secundus) in an anonymous Greek text from about the second century GC.  Like the Genesis story of eating the fruit of the tree of knowledge of good and evil, the Secundus text describes disastrous consequences of seeking knowledge.  The Secundus text more specifically describes disastrous consequences of men seeking knowledge about women.  It documents men’s troubled sense of who they are in relation to women.

Secundus heard that all women would have sex for money.  Unrecognized as a Cynic philosopher, Secundus sought to verify that proposition by propositioning his own mother.  Secundus’ mother was then a widow.  She accepted Secundus’ proposition.

Now after the two had finished dinner, and when they had started to go to bed, she was expecting to have carnal intercourse with him; but he put his arms around her as he would around his own mother, and, fixing his eyes upon the breasts that had suckled him, he lay down and slept until early morning.  When the first light of dawn appeared Secundus rose up with the intention of going out, but she laid hands on him and said, “Did you do this only in order to convict me?” And he answered, “No, lady mother, I refrained because it is not right for me to defile that place from which I came forth at birth, God forbid.”  Then she asked him who he was, and he said to her, “I am Secundus, your son.” [1]

This isn’t just of a sensational story of proving your mother’s a whore.  Secundus’ mother was a widow.  In the ancient world, widows were expected to be sexually eager.  That a man would have to pay a widow for sex would be shocking within ancient understanding.  Moreover, this wasn’t a pay-for-the-act porni transaction.  The man and woman had dinner together and then spent the whole night sleeping together.  The woman indicated that, with respect to the social norms of her time, she did wrong apart from knowing Secundus’ actual identity.

Secundus seeking the truth about women had terrible results.  Although she had not done anything wrong knowingly from the perspective of most non-Christians in the ancient Greco-Roman world, Secundus’ mother was tormented with her own sense of guilt and shame.  She hung herself.  Secundus, believing himself to be culpable for his mother’s death, resolved to remain silent for the rest of his life.  None of this makes carefully reasoned philosophical sense.  Secundus’ silence is consistent with the more general theme of suppressing knowledge and reasoning.  That suppression serves to preserve women’s social dominance.

Secundus, however, left of written record of wisdom.  It consisted of questions that the Emperor Hadrian asked Secundus, and the answers that Secundus wrote.  Originally there seems to have been twenty questions and answers.  The questions and answers are ontological with cosmic scope.  Here are the first seven questions:

Then comes three more questions and answers.  These cast light on the story of Secundus’ propositional test:

The answers to “What is Human Being?” concerns dualism of mind/spirit and body.  In the story of his test of his mother, Secundus was troubled by the connection between his sexuality and his bodily origin.  Secundus’ dualistic understanding of human being similarly shows lack of integral sense of person.

The answers to “What is Beauty?” seem implicitly weighted toward a man’s appreciation of another person’s physical beauty.  Human physical beauty fleeting with age underlies understanding beauty as “short-lived piece of good fortune, possession that does not stay with us, … accident of the flesh, minister to pleasure, flower that withers.”  The last answer to “What is Beauty?”, “human’s desire,” is sexually unmarked.  But it connects to the first answer to “What is Woman?”, “man’s desire.”  For most men, beauty is closely linked to women.

The answers to “What is Woman?” are understandings of women in relation to men.  The answers suggest men’s vulnerability to women and men’s lack of power in relation to women within the home.  Domestic violence against men continues to generate almost no help for men, men continue to face huge anti-men gender discrimination in family law, and men continue to have much worse opportunities than women do to withdraw from the paid workforce and be supported for work within the home.  Secundus’ definition of woman tends to be misandristically dismissed as misogyny.  It should be understood within the context of the literature of men’s sexed protests.

Men’s understanding of women covered a wide range. The first answer to “What is Woman?” was not only “man’s desire” (ἀνδρός ἐπιθεμία).  Within the surviving Greek manuscript corpus of the Secundus text, other manuscripts have for that phrase “man’s despondency” (ἀνδρός αθυμια) and “man’s comforter” (ἀνδρός παραμυθιά).[3]  Working from a Greek text that had “man’s despondency,” Willelmus Medicus’ influential late-twelfth century Latin translation used the phrase “man’s confusion” (hominis confusio).[4]  A late-twentieth-century male academic translated hominis confusio as “man’s undoing.”[5]  That translation of the Latin seems to reflect the description of Pandora in Hesiod’s Greek Works and Days.[6]  Understood as a revision-mistranslation, “man’s undoing” lacks the wit and literary charm of Chauntecleer’s declaration in Chaucer’s Nun’s Priest’s Tale:

For as true as Genesis declares, “Mulier est hominis confusio” — Madame, the judgment of this Latin is, “Woman is man’s joy and all his bliss.”[7]

Throughout history, men have not consistently understood women.

Secundus’ text doesn’t include the question “What is Adult Male Human {Man}?” corresponding to the question “What is Woman?”  Man, meaning adult male human, historically has been a category of relatively little explicit public consideration.  The distinctiveness of men has been obscured within generic consideration of humans.  Progressive scholars need to bring more awareness of men’s being into literature and public life.

[2] I’ve modified Perry’s translation to better track the Greek text given in Perry (1964) pp. 82-4.  The answers in Greek are typically short phrases that do not include any definite articles.  Perry’s translation used a mix of definite and indefinite articles as the first words of the answer clauses.  I have eliminated those articles.  In addition, Perry translated both ἄνθρωπος (human being) and ἀνδρός (adult male) as “man”.  I have clarified the sexual distinction between those word-forms.

[4] Id. p. 96.  Willelmus Medicus in 1167 brought from Constantinople a Greek manuscript of Secundus the Silent Philosopher.  That Greek manuscript has survived and is identified as R in Perry’s manuscript corpus analysis.  Id. pp. 23-38. Blamires in Blamires, Pratt & Marx (1992), p. 100, n. 4, declares, “Willelmus derived this notorious opening expression from a corruption in his Greek MS of a phrase meaning ‘the object of man’s desire’.”  The Greek R manuscript that Willelmus used had the variant Greek ἀνδρός αθυμια.  That Greek variant is better understood as a revision than a corruption.  Vincent of Beauvais (1190-1264) used Willelmus’ Latin translation (Vita Secundi Philosophi) in his Speculum historiale, an influential medieval European encyclopedia.  For additional discussion (and medieval manuscript texts) of the Latin translation hominis confusio, see Brown (1920).

[7] Chaucer, Nun’s Priest’s Tale, ll. 3163-6, my close translation into modern English.  Here’s an alternate translation that seems to me to dissipate some of the decisiveness of the original Old English.  The phrase mulier est hominis confusio doesn’t occur in most Latin Secundus texts.  The common form in Latin translation, following the original Greek, is the question, Quod est mulier? (“What is woman?”) followed by answer clauses.  The first answer clause is commonly hominis confusio.  Mulier est hominis confusio obscures the full range of men’s thinking about Quod est mulier?.

[image] Imaginary rendition of Secundus the Silent Philosopher.  Constructed from image of Luni marble portrait of Plato made by Silanion ca. 370 BGC for the Academia in Athens. Musei Capitolini MC1377.  Copy in the sacred area in Largo Argentina, 1925.  Source image thanks to Jastrow and Wikipedia.

Perry, Ben Edwin Perry. 1964. Secundus, the silent philosopher: Critically ed. and restored so far as possible together with transl. of the Greek and Oriental versions, the Latin and Oriental texts, and a study of the tradition. New York: The American Philological Association.