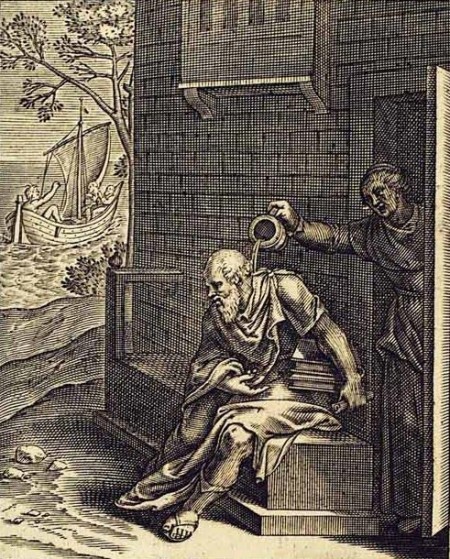 The fifth-century Athenian philosopher Socrates was associated in Greco-Roman literature with rationalizing his wife Xanthippe’s abusive behavior. Socrates, a radical critic of Athenian society, apparently was reluctant to criticize his own wife. In the transmission of Socrates’s wisdom through the Islamic world and early medieval Europe, Socrates’s acceptance of Xanthippe’s abusive behavior was transformed into Socrates’s general disparagement of women. That represents a failure of substantive critique that continues in the classical tradition today.

Xenophon, a student of Socrates, wrote a dialogue featuring Socrates. In that dialogue, Socrates’s interlocutor described Xanthippe as “the hardest to get along with of all the women there are—yes, or all that ever were, I suspect, or ever will be.” He asked Socrates why he chose to live with such a wife. Socrates explained:

I observe that men who wish to become expert horsemen do not get the most docile horses but rather those that are high-mettled, believing that if they can manage this kind, they will easily handle any other. My course is similar. Human beings at large is what I wish to deal and associate with; and so I have got her, well assured that if I can endure her, I shall have no difficulty in my relations with all the rest of human kind. [1]

In medieval Europe, the ideology of amour courtois taught men that toiling for women’s love made them better men. In Xenophon’s dialogue, Socrates argued that his shrewish wife Xanthippe made him more socially capable. Both are rationalizations for oppressive circumstances.

Socrates’s excuses for Xanthippe’s abusive behavior seem to have expanded across Greco-Roman history. A Roman philosopher writing about the time of Jesus observed that Socrates laughed heartily “when his wife Xanthippe drenched him with foul water.”[2] Writing about 250 GC, a biographer of Greek philosophers stated:

When Xanthippe first scolded him and then drenched him with water, his rejoinder was, “Did I not say that Xanthippe’s thunder would end in rain?” [3]

Laughing at abuse and naturalizing it through analogy to the weather are strategies to cope with helplessness. In other domestic incidents, Socrates similarly combined laughter and passivity:

They {Xanthippe and the woman Myrto} engaged in conflict with one another, and when they stopped {attacking each other}, they attacked Socrates, because he never prevented their battles but laughingly watched them fighting both himself and one another. [4]

Alcibiades sent Socrates a large and beautifully made cake. Xanthippe was annoyed in her usual way, treating the cake as a present sent by a favourite boy to his lover to reinforce his passion, so she emptied it out of the basket and trod on it. Socrates laughed and said: “Well, you won’t get any of it either.” [5]

When Alcibiades declared that the scolding of Xanthippe was intolerable, “No, I’ve gotten used to it,” said he {Socrates}, “like the continued rattle of a windlass. You yourself don’t mind the cackle of geese.” “No,” replied Alcibiades, “but they furnish me with eggs and goslings.” “And Xanthippe,” said Socrates, “is the mother of my children.” [6]

Once when Socrates took Euthydemus home with him from the wrestling school, Xanthippe came up to them in a rage and scolded them roundly, finally upsetting the table. Euthydemus, deeply offended, got up and was about to leave when Socrates said, “At your house the other day did not a hen fly in and do precisely this same thing, yet we were not put out about it?” [7]

When she {Xanthippe} tore his coat off his back in the market-place and his acquaintances advised him to hit back, “Yes, by Zeus,” said he, “in order that while we are sparring each of you may join in with ‘Go to it, Socrates!’ ‘Well done, Xanthippe!'” [8]

In the early Roman Empire, elite men were reluctant to marry. At that time, Socrates was associated with resigned acceptance of men’s unhappiness with their familial relations:

Socrates also, when consulted by a young fellow whether to take a wife or keep away from matrimony altogether, replied that whichever he did he would be sorry. “On the one hand,” he said, “you will fall prey to loneliness and childlessness and the extinction of your line and an alien heir, on the other to perpetual anxiety, a tissue of complaints, harping on the dowry, the haughty frown of in-laws, the clacking tongue of your wife’s mother, the lurking paramour, the doubtful outcome of children.” He did not allow the young man in a context of disagreeable outcomes to think that he was making a choice of happiness. [9]

Juvenal and Jerome responded to the passive acceptance of men’s unhappiness with vigorous exhortations to men and women to remain unmarried. Men today under the banner of MGTOW (Men Going Their Own Way) reject oppressive relations with women. Yet, all in all, well-educated men and women today rationalize women’s abusive behavior more comprehensively than Socrates did in the Greco-Roman world. That makes marriage much less attractive to men than it could be.

I have met with three evils – grammar, poverty, and a damned woman. I made my escape from two of them, but I could not escape the damned woman.

Better to bury a woman than to marry one. For I am a demon to myself, having married. [10]

In medieval Arabic literature, Socrates regarded women as evil and marriage as worse than death. One Arabic story:

When Socrates was told that a certain personal enemy of his had died, he said: “I wish you had broken to me the news about his having got married.” [11]

According to Socrates in medieval Arabic literature:

In a Hebrew text drawing upon Arabic literature and written in Spain about 1200, Socrates declared that he chose a short wife so as to have “the least of the evil.” In another apophthegm from that text, one of Socrates’s disciples gazed upon a beautiful women. Socrates warned against such gazing. The disciple explained that he was merely admiring God’s craftsmanship. Socrates responded, “Turn her inside out; then you will understand her ugliness.”[13] An eleventh-century Arabic text containing Socratic wisdom was translated into Spanish in the first half of the thirteenth century, then into Latin, French, and English. The English versions of the second half of the fifteenth century recorded:

In that text, Socrates expanded considerably further the theme that women are evil. Yet of Xanthippe the text says only that she was “the worst woman that was in all that country {Greece}.”[15] In Arabic literature, Xanthippe “appears in a favorable light as a loving, though simple wife, concerned with her husband’s fate.”[16] Socrates’s general contempt for women reversed in particularity and values Socrates’s excuses for Xanthippe’s abusive behavior.

Following the lead of the celebrated medieval author Christine de Pizan, more recent literature has upheld Socrates’s classical tradition of excusing and rationalizing Xanthippe’s abusive behavior. In its entry for Xanthippe, an important reference work on the classical tradition observed:

Although a strong tide of prejudices and proverbs has run against her, Xanthippe has had defenders. At the turn of the 15th century Christin de Pizan presented her laudatorily in The Book of the City of Ladies (2.21.1). In 1865 Eduard Zeller published an essay, “To Save the Honor of Xanthippe” (in Vorträge und Abhandlungen geschichtlichen Inhalts); in 1884 Fritz Mauthner made a case in her favor in a novel, Xanthippe; in 1944 the Austrian Hanns Sassmann also wrote a novel in her cause; and in 1960 Stefan Paul Andres published 12 stories in her defense. [17]

Consistent with gynocentrism, discussion of Xanthippe’s behavior has focused on women:

The name {Xanthippe} has been invoked often, both pro and con, in discussions of women’s rights and in other feminist causes, as in a dialogue entitled “Xanthippe on Woman Suffrage” by Duffield Osborne in the Yale Review for 1915 (4:590-670); in a pamphlet, Xanthippe: San Jose Women’s Liberation, issued in 1971 by the Xanthippe Collective of San Jose, California; in the names of bookships and printing presses; and in a section of a novel by Cynthia Ozick, The Puttermesser Papers (1997). [18]

The classical tradition remains important today.  Appreciating the full richness of human literature throughout history can help to imagine a more loving future for women and men. 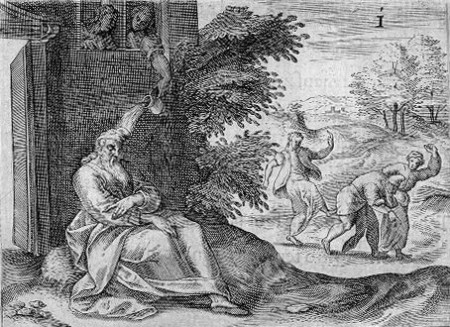 [1] Xenophon, Symposium, 2.10, from Greek trans. Todd (1921). The previous quote is from id. This passage came to circulate independently as a chreia — a brief narrative saying attributed to a well-known person. A chreia is a specific type of apophthegm. Versions of this chreia circulated in Greek, Arabic, and Latin. Greek: Putarch, Moralia, De capienda ex inimicis utilitate (How to profit from one’s enemies) 90s (sec. 8), Aulus Gellis, Attic Nights, 1.171, SAWS (2013). Arabic: Alon (1991) p. 53. Latin: e.g. John of Salisbury, Policraticus, Bk. 5, Ch. 10, in Nederman (1990) p. 89. The truthfulness of these stories is less important than their cultural significance.

[7] Plutarch, Moralia, De cohibenda ira (On the Control of Anger) 461d (sec. 13), from Greek trans. Loeb Classical Library, 1939. In On contentment 11, Plutarch tells a similar story of Pitticus and his wife. A friend comments about Pitticus:

In public this man is an object of envy, but as soon as he opens the door of his home, he’s in a pitiful state: his wife is in complete control, she bosses him about and argues all the time. He’s got rather a lot of reasons to be miserable, whereas I’ve got none.

The intended implication seems to be that the friend was unmarried.

[14] The Dicts And Sayings Of The Philosophers, 11 Socrates, ll. 419-25, in modernized English. Mubashshir ibn Fatik composed a collection of dicts and sayings in Arabic in the eleventh century. It is known as Mukhtar al-hikam. In the first half of the thirteenth century, that work was translated into Spanish as Bocados de Oro. In the second half of the thirteenth century, Bocados de Oro was translated into Latin as Liber Philosophorum Moralium Antiquorum. Guillaume de Tignonville translated that into French about a century later to create a work known as Dits Moraulx. That work was translated into English several times between 1450 and 1500. William Caxton printed an English version, The Dicts and Sayings of the Philosophers, in 1477. That may have been the first book printed in England. This summary of textual history is based mainly on John William Sutton’s introduction to his critical edition of The Dicts and Sayings of the Philosophers.

[17] Grafton, Most & Settis (2010) p. 996. Id. refers to Xanthippe’s character having been “besmirched” and “the defamation of Xanthippe.” A recent post on Classical Wisdom Weekly provided “Five Reasons Why Socrates Was a Terrible Husband.” That post shows the listicle style and thematic targeting used to attract attention on the Internet.

Nederman, Cary J., trans. 1990. John of Salisbury. Policraticus: of the frivolities of courtiers and the footprints of philosophers. Cambridge, England: Cambridge University Press.