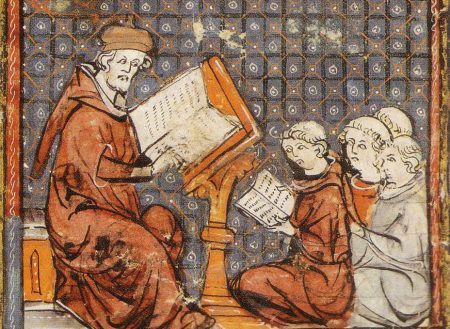 By late in the twelfth century, the nascent University of Paris was attracting ambitious scholars. These scholars devoted themselves to pursuing knowledge just as courtly lovers devoted themselves to pursing women. The labors of ambitious scholars and courtly lovers bore mainly wretchedness. Seeking learning or women as a means of external validation implies mistaken reasoning or disordered desire.

According to the Architrenius, a long Latin poem finished in 1184, Paris is the best of all places for gods and scholars:

Paris, the second palace of Phoebus, Delphic in its citizenry, Chrysaean {gold-bearing} in its wealth, a Greece in libraries, an India in its schools, a Rome for poets, an Attica for philosophers; the flower of the world, the balm of creation, a Sidon for its splendor, its feasts and its drinking.

One place uniting the world’s best places for knowledge, predictive power, wealth, and lavish eating and drinking — what else could a scholar-man desire other than Kievan women?

At the University of Paris, the scholar’s zeal for knowledge brings him misery. His hair becomes unkempt, and his clothes, threadbare. For food he has mainly peas, beans, onions, and cabbage. He sleeps on a thin pallet through which he can feel the hard floor. But he passionately seeks to penetrate what he doesn’t already know:

pursed lips express the effort of the panting mind, he strives to advance with his whole being, pours forth long-drawn sighs and groans as the barriers are broken, brings the hot blood to his face, and puts forth his utmost effort, while his eyes blaze in frenzy.

All night long he is preoccupied with knowledge:

Toiling at such tasks, by lamplight and by the light of learning, he grows faint with exhaustion, yet burns with eager love to make Minerva wholly his own. Only when Phoebus has arisen from the low-lying Antipodes, and drawn within a few paces of the horizon, does peaceful sleep first spread its gentle mist over his eyes. Now he holds his pen and other tools with slack fingers, while the open book receives the weight of his drooping head. But even in the peace of slumber the unceasing labor of the student finds no peace. Care remains wakeful even in the midst of sleep, and the sleeper’s anxious mind is still proposing books and projects to itself. This abiding anxiety never succumbs to sleep; instead the preoccupations that had earlier kept him awake return, and the vast amount of work to be done presents itself like a Hydra of troubles to his restless cogitations.

He bitterly laments having spent some time in sleep. He imagines that because he didn’t rise soon enough his place is being taken by another:

Eager to arrive at school before his master, he fears that the other has arrived already, that the master has already sounded the horn for a daily lesson, and is now proffering a second round of Delphic libations. He curses his body for succumbing to fatigue; indignation evokes a sneer of bitter anger, and spews forth the complaints that swell his burning bosom, lamentations that bring him at last to the point of tears.

The scholar, subordinate to his master, lacks self-confidence in his ability to know. He imagines that another man could take his place. He doesn’t believe in his own intrinsic value, he doesn’t honor his own wonderful body, and he experiences not pleasure, but wretchedness.

It is thus with the soldier of Venus who has arranged to come in secret to his mistress’s door at nightfall. … he flies, borne along by the wings of Cupid, and looks about him, and takes the measure of earth and heaven, the one with his hastening feet, the other with sweeping gaze.

The scholar, the “soldier of Phoebus,” is like the courtly lover:

In the same way, the soldier of Phoebus, exerting feet and mind to the utmost, hastens to the precincts of Minerva, the sanctuary of learning, continually glancing at the horizon as he proceeds, spanning the horizon with his eyes and the earth with his feet.

After sleeping for an hour, the courtly lover curses himself like the scholar did:

He curses himself for having trusted his eyes to keep watch. He declares that his prayers have been rendered vain by the loss of the hour now past, that his beloved, once deceived, may never be enjoyed. He grows ashamed, and condemns himself as one unworthy of admission to the camp of Venus.

The courtly lover is as wretched as the scholar. Both believe that they should be able to stay up all night long. That’s as ridiculous as Burnel believing that his penis is too short.

Elite medieval Latin poetry contrasted the student of Athena with the student of Venus  — the ambitious scholar with the courtly lover. Modern scholarship is largely the product of ambitious, career-oriented scholars. Modern scholarship has celebrated the men-abasing horrors of courtly love. The Architreneus highlights that the ambitious, careerist scholar and the courtly lover are similar in their instrumental folly and their experiential hardships.

Medieval European culture was imbued with Christianity. Yet just as a person can become insensitive to her or his spouse’s beauty, medieval clerics could neglect a significant aspect of Christ’s person. Jesus did not act like a professional physician. Jesus engaged in playful mocking. Jesus participated in the outrageous, stinking reality of life. At the medieval University of Paris or in medieval royal courts, both the ambitious scholar and the courtly lover lacked the fullness of Christian life.

[image] Illumination of a master-teacher and tonsured students at the University of Paris. From a late 14th-century Grandes Chroniques de France. Image via Romeo (2015). If you know the specific manuscript containing this illumination, please contribute it in the comments so that purple motes can continue to maintain high scholarly standards of reference.