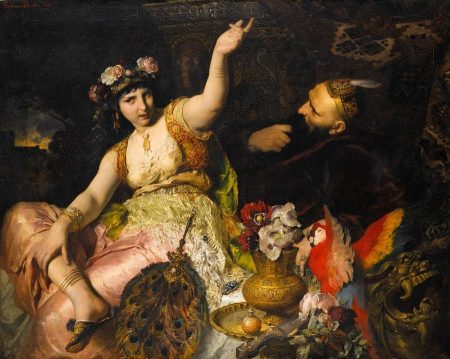 When King Shahzaman unexpectedly returned home to his palace, he discovered his wife in the arms of a kitchen boy. Shahzaman was furious and emotionally devastated. Expressing his personal commitment to gender equality, he not only killed the kitchen boy, but his wife as well. Shahzaman then set out to visit his brother King Shahrayar.

At his brother’s palace, Shahzaman was listless and grief-stricken. He couldn’t get over what his wife had done to him. He imagined that no one else had experienced what he had experienced. Shahzaman grew pale, lost weight, looked ill, and neglected everything.

One morning when his brother was out hunting, Shahzaman sat at a window overlooking a garden in his brother’s palace. He agonized over his misfortune and stared at the heavens. Movement below interrupted his melancholy thoughts:

the private gate of his brother’s palace opened, and there emerged, strutting like a dark-eyed deer, the lady, his brother’s wife, with twenty slave girls, ten white and ten black. While Shahzaman looked at them, without being seen, they continued to walk until they stopped below his window, without looking in his direction, thinking that he had gone to the hunt with his brother. Then they sat down, took off their clothes, and suddenly there were ten white slave girls and ten black slave boys who had been dressed in the same clothes as the girls. Then the ten black slave boys mounted the ten white slave girls, while the lady called, “Mas’ud, Mas’ud!” and a black slave jumped from the tree to the ground, rushed to her, and, raising her legs, went between her thighs and made love to her. Mas’ud had sex with the lady, while the ten slave boys had sex with the ten slave girls. They carried on until noon. When they were done with their activity, they got up and washed themselves. Then the ten slave boys put on the same clothes again, mingled with the girls, and once more there appeared to be twenty slave girls. Mas’ud himself jumped over the garden wall and disappeared, while the slave girls and the lady sauntered to the private gate, went in and, locking the gate behind them, went their way.

King Shahzaman was stunned. His brother King Shahrayar was being cuckolded, not just by his wife, but also by twenty of his slaves. Shahzaman wearily exclaimed:

This is our common lot. Even though my brother is king and master of the whole world, he cannot protect what is his, his wife and his concubines, and suffers misfortunes in his very home. What happened to me is little by comparison. I used to think that I was the only one who has suffered, but from what I have seen, everyone suffers.

Many men are cuckolded. Some are forced to make large monthly financial payments (“child support” payments) to the women who cuckolded them and bore other men’s children. Even in the enormous, powerful, and highly cultured Islamic caliphate of the eighth century, caliphs were subordinate to their slave girls. The reality of the general absurdity of men’s sexual subordination to women buoyed Shahzaman’s spirit. He began to eat and drink with relish and be joyful.

Shahzaman arranged for Shahrayar to see the cuckolding spectacle. They rode out on a multi-day hunting expedition, but then secretly sneaked back into the palace. They hid in the room above the garden and waited until morning to see what would happen:

As they watched, the private gate opened, and there emerged as usual the wife of King Shahrayar, walking among the twenty slave girls. They made their way under the trees until they stood below the palace window where the two kings sat. Then they took off their women’s clothes, and suddenly there were ten slave boys, who mounted the ten slave girls and made love to them. As for the lady, she called “Mas’ud, Mas’ud,” and a black slave jumped from the tree to the ground , came to her, and said, “What do you want, you slut? Here is Sa’ad al-Din Mas’ud.” She laughed and fell on her back while the slave mounted her and like the others had sex.

Women tend to find sexually attractive men like Mas’ud — highly self-confident men who aren’t afraid to disparage them. King Shahrayar, like many men today, was stunned at this revelation. He and his brother decided to put aside their kingdoms and roam the world until they found one more misfortunate than them.

Roaming about, the kings Shahrayar and Shahzaman came to a meadow by the seashore. While they were sitting in the meadow, morosely discussing their misfortunes, they heard a tremendous noise coming from the middle of the sea. The sea suddenly parted and up rose a swaying black pillar that got taller and taller until it seemed to touch the clouds. Shaking in terror, Shahzaman and Shahrayar ran. Then the climbed up a tall tree. They hid in its foliage.

The black pillar in the middle of the sea moved toward the shore. When it came closer, Shahzaman and Shahrayar could see that it was a black demon carrying on its head a large glass chest secured with four steel locks. The demon walked out of the sea and into the meadow. It then sat down under the tree in which Shahzaman and Shahrayar were hiding.

The demon put the glass chest on the ground and unlocked it. From the chest he pulled out a full-grown woman. She had a beautiful bosom, large buttocks, a face like a full moon, and a lovely smile. The demon laid her on the ground and said to her:

Mistress of all noble women, you whom I carried away on your wedding night, I would like to sleep a little.

The demon placed his head on the woman’s lap, stretched out his legs to the sea, and began snoring in sleep.

After a little while, the woman noticed Shahzaman and Shahrayar hiding in the tree. She lifted the demon’s head from her lap and put it on the ground. She motioned to the men in the tree to come down to her. They remained frozen in place. Then she called out to them, “You must come down to me.” They begged her and implored her to allow them to remain in the tree, saying “For God’s sake, leave us alone.” But she insisted on having her way:

She replied, “You must come down, and if you don’t, I shall wake the demon and have him kill you.” She kept gesturing and pressing, until they climbed down very slowly and stood before her. Then she lay on her back, raised her legs, and said, “Make love to me and satisfy my need, or else I shall wake the demon, and he will kill you.” They replied, “For God’s sake, mistress, don’t do this to us, for at this moment we feel nothing but dismay and fear of this demon. Please, excuse us.” She replied, “You must,” and insisted, swearing, “By God who created the heavens, if you don’t do it, I shall wake my husband the demon and ask him to kill you and throw you into the sea.” As she persisted, they could no longer resist and they had sex with her, first the older brother, then the younger.

In short, the woman raped both the kings and cuckolded her demon-husband.

The situation was actually even worse than that. The woman demanded that Shahzaman and Shahrayar give her their rings. She pulled out a purse and showed them ninety-eight rings. She explained:

All the owners of these rings slept with me, for whenever one of them made love to me, I took a ring from him. Since you two have slept with me, give me your rings, so that I may add them to the rest, and make a full hundred. A hundred men have known me under the horns of this filthy monstrous cuckold, who has imprisoned me in this chest, locked it with four locks, and kept me in the middle of the raging, roaring sea. He has guarded me and tried to keep me pure and chaste, not realizing that nothing can prevent or alter what is predestined and that when a woman desires something, no one can stop her.

Women have always been far more powerful than men in human societies. That’s why today men lack any reproductive rights, men don’t have equal knowledge of who their biological offspring are, and men vastly outnumber women among persons held in captivity in prisons and jails.

Their stunning realization of women’s power transformed both King Shahzaman and King Shahrayar.  They exclaimed:

O God, O God! There is no power and no strength, save in God the Almighty, the Magnificent. Great is women’s cunning.

They both took off their rings and give them to the woman. She put the rings in her purse, sat down, and put the sleeping demon’s head back onto her lap. Then she sternly ordered Shahzaman and Shahrayar to go away. They did as she ordered. They returned home, knowing that the awesomely powerful demon was even more worse off than them.

Both Shazaman and Shahrayar resolved never to marry again. However, because he continued to find women highly attractive, King Shahrayar engaged in succession of one-night stands. He would have sex with a woman for one night, and then the next morning order her to be killed. The resulting slaughter of women raised women’s violent death rate from a quarter of the violent death rate for men to half the violent death rate for men. The public was outraged about the extent of violence against women. The vizier’s daughter Shahrazad, a world-famous heroine, sprang into action on behalf of gender justice for women.

Men seeking gender equality can learn much from Shahrazad. She had extensive knowledge of literature, poetry, and the wisdom of her forefathers:

Shahrazad had read the books of literature, philosophy, and medicine. She knew poetry by heart, had studied historical reports, and was acquainted with the sayings of men and the maxims of sages and kings. She was intelligent, knowledgeable, wise, and refined.

Using her story-telling acumen, Shahrazad prevented any further violent deaths of women. Compared to women, men read very little fiction. Is it any wonder that men continue to have a violent death rate much higher than that of women?

To achieve gender equality, men must learn to tell stories, as well as cry compellingly. With the possible exception of the ideologically repressive recent decades, world literature throughout history is full of stories highlighting gender injustices against men. Men must draw upon these literary riches. To forestall fates even worse than befell King Shahraman and King Shahrayar, men must learn from Shahrazad.

The above story is slightly adapted from the Prologue of the Arabian Nights (1001 Nights). The quotations are from the translation of Haddawy (2010) pp. 5-13. I have made a few insubstantial changes to the quotations.

2 thoughts on “cuckolded and raped: forestalling the fate of Shahzaman & Shahrayar”