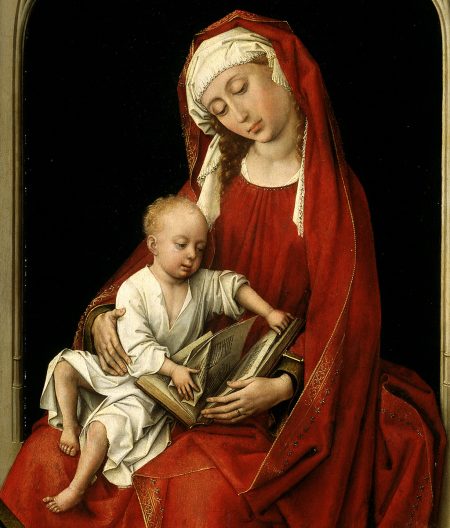 “Let every age now recognize {Agnoscat omne saeculum},” a hymn probably written in the sixth century for the celebration of Christmas, brings together the epic and the ordinary, heaven and earth:

So Mary in her womb conceived
by seed bestowed by faithful word;
him whom a world does not sustain
a young girl’s belly now contains.
…
A manger’s confines he endured
who was author of light itself;
he with the father formed the sky,
he his mother’s swaddling donned.

The poet doesn’t shy from referring to a man’s semen in figuring conception and to Mary’s specific belly. Yet the poet also refers to Jesus with an epic image associated with Alexander the Great. Jesus who with God the father formed the sky, with its sun and moon, covers his little moon with swaddling clothes he received from his earthly mother. Heaven has come to earth in a truly earthy way.

The hymn “How blessed was that bed of straw {Quam beatum stratum}” similarly brings together the epic and the ordinary. In twelfth-century France, Heloise of the Paraclete’s ex-lover Peter worked for her to write this hymn for her to use at work on Christmas as a career woman. This hymn celebrates the once-common practice of a woman giving birth and living with her husband, even in impoverished circumstances. Yet the woman Mary, a virgin married to her husband Joseph, gives birth to an extraordinary child:

How blessed was
that bed of straw, on which
rested the flank
of that virgin so great,
on which was laid
that baby at his birth,
in whose small palm
the heavens are enclosed.

In silken cloths
all other queens always
with utmost pain
give birth to their children;
this blessed couch
made out of worthless straw
had no sense
of any pain at all.

For the nurture
of the children of kings,
the breasts of wet nurses
are commandeered;
this child was reared
upon a virgin’s milk;
the virgin bore him
with hymen intact.

The baby who can enclose the heavens in the palm of his hand is born onto a bed of straw. Epic, tragedy, and other high literature typically concerns kings and queens. This baby boy and his mother weren’t like other kings and queens. A king as a baby wouldn’t even suckle at his mother’s breast. A courtier might lose his head for referring to a queen’s hymen. Yet Christians celebrated the human bodily reality of Jesus and Mary.

False piety has distorted understanding of Christianity. Dante’s gyno-idolatry is less Christian than Boccaccio’s outrageously earthy humanism. The conclusion of the Romance of the Rose offers profound Christian moral instruction. Ancient Latin Christian hymns appreciated men’s sexuality. So too should all Christians. And not just all Christians, but all the world.

[1] “Let every age now recognize {Agnoscat omne saeculum},” st. 3, 5, Latin text and English translation (adapted slightly) from Walsh (2012) pp. 234-5. Here’s the full Latin text. This hymn has been attributed to Venantius Fortunatus, but it doesn’t appear in his collected works. The hymn doesn’t appear in the Old or New Hymnal. Walsh regards its attribution Venantius Fortunatus as only an “attractive possibility.” Id. p. 465. The hymn’s similarity in content and style to Fortunatus’s hymns make it likely that it was composed in the sixth century.

Abélard stands in a special position as a hymn writer, as he stands alone as a philosopher. He broke away from tradition, and left no successors. The hymns bear the mark of an original genius, and would have attracted attention apart from the immense fame of their author.

The Latin term alimonia that Abelard used above means “nourishment” or nurturing food and drink. In modern English, the term “alimony,” like “child support,” is used as a misleading term for state-mandated financial payments that depend mainly on the payer’s income at the time of the order, not the payee’s need for nourishment or loving parental support. These financial obligations are vastly disproportionately imposed on men through systemic anti-men sex discrimination.

[image] Jesus, in the lap of Mary, riffling the pages of her book. Excerpt from oil-on-panel painting known as the Durán Madonna. Made by Netherlandish painter Rogier van der Weyden between 1435 and 1438. Preserved under accession number P02722 in the Prado National Museum (Madrid, Spain).