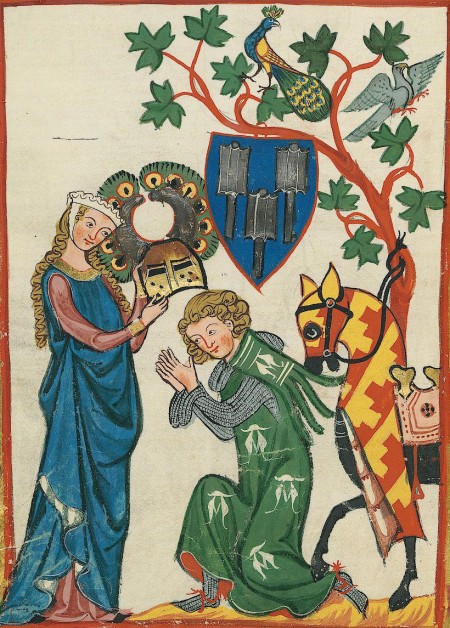 So said the knight Yvain in the late-twelfth-century Arthurian romance Yvain: The Knight with the Lion. Yvain had killed the lady’s husband in a foolish bid for knightly glory. He then fell madly in love with the grieving lady.

At great risk to himself, Yvain sought out a meeting with the lady. He surrendered himself completely to her:

“Lady! Rather than beg
For your mercy, I’ll thank you for anything
You wish to do with me.
Nothing you do could displease me.”
“Really? And what if I kill you?”
“Lady! Your will be done.
You’ll never hear me complain.” [2]

The repeated, exclamatory address “Lady!” emphasizes Yvain’s desperate desire to serve the lady. The phrase “your will be done” echoes the prayer Jesus taught his disciples in the context of warning them about heaping up empty phrases in their prayers.[3] Yvain intended his prayer to the lady to be taken seriously. He explained:

No power on earth could be
As strong as this which orders
Me to consent to your will,
Completely and in every regard.
Nothing could make me hesitate
To do whatever you wish. [4]

In the Christian context of this text, Yvain proclaimed outrageous idolatry.

Men today for whom idolatry means nothing still practice it in relation to women by following Yvain’s chivalric model. Such men are fundamentally deluded about how to please women. More importantly, such men deprive themselves of human dignity and support social injustices of men’s subordination.[5]

[1] Chrétien de Troyes, Yvain: The Knight with the Lion, ll. 1922-7, from Old French trans. Raffel (1987) p. 59. The lady was Laudine, called also the lady of Landuc. Yvain became a prisoner in Laudine’s palace after pursuing her husband there to get evidence of his victory. After falling in love with the widowed Laudine, Yvain declined an opportunity to escape from imprisonment in her palace.

[2] Id. ll. 1975-81. Killing Yvain is plausible punishment for his killing of Laudine’s husband. Men of the palace had earlier unsuccessfully sought to find and kill the perpetrator. Laudine’s interest in using Yvain in battle helped to motivate her not just to spare him, but to marry him.

[4] The phrase “no power on earth” suggests conscious authorial flirting with idolatry. With respect to idolatry, the question is how Laudine’s power over Yvain compared to God’s power over Yvain. Since Yvain indicated his willingness to consent even to her will going against the law of God, he made her superior to God to him. Yvain went on to marry Laudine.

[5] Men vastly predominate among prisoners. That gender inequality is directly related to anti-men sex discrimination in criminal justice. Lack of public concern about this fundamental injustice makes it seem as if men want to be prisoners, and women want men to be imprisoned. Men and women of good will should strongly oppose imprisonment of men in any form unless unavoidably necessary for strictly scrutinized reasons.

[image] Knight pledging service to lady. The knight depicted is Der Schenk von Limpurg (either Walther I, fl. 1230s-1240s, or one of his sons, Walther II or Konrad I). Illustration from Codex Manesse, Zurich, made between 1305 and 1315. UB Heidelberg, Cod. Pal. germ. 848, fol. 82v. Thanks to University of Hiedelberg and Wikimedia Commons.

5 thoughts on ““she wants you to be her prisoner””