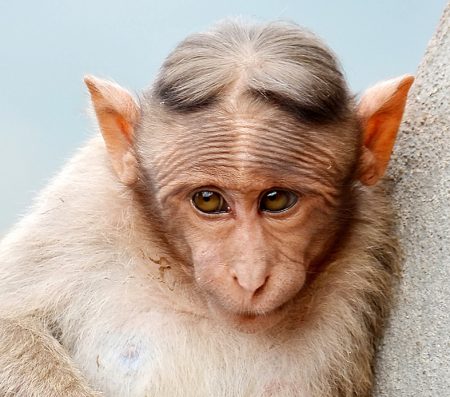 I remember fondly, as a young boy, singing with my brothers at another brother’s birthday party:

None of us had studied classical Greek literature. Nonetheless, through the amazing influence of human culture, we had unconsciously absorbed the thinking of the ancient wise man Anacharsis the Scythian. What we had understood remains opaque to learned interpreters of Parmeniscus laughing at a statue of Apollo’s mother. That’s no mere matter of amusement. It indicates a fundamental failure in critical intellectual development.

I am certainly aware that when Anacharsis the Scythian was at a party and some comedians were introduced, he failed to laugh, whereas when a monkey was brought in, he laughed and said: “This creature is naturally funny — but a human being has to work at it!” [1]

Compared to other animals, monkeys and apes are relatively close to humans in an evolutionary biological sense. In the ninth century, an eminent Christian physician working in the capital of the Abbasid Caliphate was said to have an ape as his beloved friend. An Arabic story from perhaps a century later tells of a sailor having sex with a monkey and engendering a monkey-human hybrid. Nonetheless, most humans throughout history probably would regard monkeys as funny-looking relative to humans.

When it comes to dominant women, being funny-looking is irrelevant. Consider Parmeniscus of Metapontum. After receiving an oracle from the god Trophonius, Parmeniscus lost the ability to laugh. Perhaps Trophonius revealed to him the fundamental principle of communication economics or a similarly horrifying insight. Parmeniscus then consulted the priestess Pythia (the Delphic Oracle) about the situation. She said:

You ask me about soothing laughter, unsoothed one;
Mother at home will give it to you — honor her greatly. [2]

Parmeniscus thought that when he saw his mother, he would regain the ability to laugh and be soothed. Seeing his mother, however, didn’t help.

Confronting fundamental social structure, rather than meeting with his personal mother, enabled Parmeniscus to laugh. One day he entered a sanctuary of Apollo’s mother Leto. That sanctuary held a famous statue of her. As mother of the powerful god Apollo, son of Zeus, Leto held preeminent divine power:

But when he saw that it {the statue of Leto} was made of wood and ugly, he laughed spontaneously. He then recognized the meaning of Apollo’s oracle {Pythia’s oracle} and was cured of his malady. He then showed the goddess enormous honor. [3]

The Delphic Oracle, which knew everything, undoubtedly knew the genre of ugly mother jokes, e.g. “Yo mama is so ugly that she turned Medusa to stone!” The oracle’s message to Parmeniscus encompassed that humor within cosmic insight.[4] The divine mother that rules the world is ugly, yet powerful. The reality of the social order is laughable, but irresistible. Men must honor the ruling ugly woman.

[1] Athenaeus, The Learned Banqueters 14.613d, from Greek trans. Olson (2010) p. 101.Yonge’s translation (1854) is available online at the excellent site Attalus. Writing in France in the middle of the twelfth century, Bernardus Silvestris depicted apes as laughable:

[2] Semus, History of Delos, Book V, quoted in Athenaeus 14.614a-b, trans. Beard (2014) p. 175, adapted slightly. Beard’s translation is slightly more literal than Olson’s. According to Semus, Parmeniscus was from a distinguished family and very rich. For a detailed description of the oracle of Trophonius, see Pausanias, Description of Greece 9.39.3 – 9.40.2.

[4] Mainstream scholarship has interpreted the story of Parmeniscus with ponderous complexity, but without any sense of humor and without any understanding of men’s social position. Milanezi suggests that “monkeys’ attitudes resemble those of men.” She recounts Plato’s slanderous representation that Thersites, a strong, independent voice of men’s sexed protest, chose to be reincarnated with the soul of a monkey. Milanzi (2010) pp. 404, 406. Kindt abstractly discerns enlightened appreciation for the dominant order and ignores the implicit gender-political critique:

Parmeniscus’ laughter, we can suspect, changes in quality as it becomes self-reflective. It starts off as a naïve and unreflective response to the apparent crudeness of divine form. It turns into an astonished appreciation of the complexities of divine representation as Parmeniscus understands the meaning of the oracle.

In Athenaeus’ account, what finally dispelled Parmeniscus’ inability to laugh was the sight of a statue that was, in his view, a very poor imitation of what it was pretending to be. This is, in other words, another example of how mimesis and, more specifically, the boundaries of successful imitation were linked to the production of laughter.

Beard (2014) pp. 175-6. Distinctively masculine voices are unwelcomed, harassed, and suppressed in literary criticism. The resulting lack of understanding is deplorable.

[image] A bonnet macaque (Macaca radiata) sitting on a rock. Thanks to Augustus Binu and Wikimedia Commons.