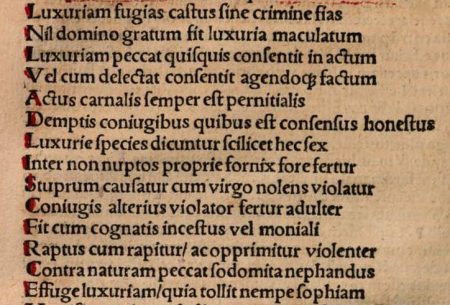 Within the eight works (Auctores octo) that made up the canon of late-medieval education, one was a twelfth-century poem of Christian doctrine. Called Floretus, this work has been almost wholly ignored in recent centuries. Yet Floretus provides an insightful catalog of lust, a succinct definition of the purpose of marriage, and liberal grounds for arguing divorce and annulment cases.

Flee lust; may you be chaste, without sin.
Nothing defiled by lust is pleasing to the Lord.
Whoever consents in the act or, since it delights him,
whoever consents in doing the deed, sins by means of lust.
A carnal act is always destructive outside of
marriage in which there is worthy consent.

There are said to be six species of lust, namely these:
Between those not properly wed, it is called fornication.
Defilement is caused when an unwilling maiden is violated.
The violator of another’s spouse is called an adulterer.
With one’s relatives or a nun, it is incest.
When one is seized and forcefully overwhelmed, it is rape.
The abominable sodomite sins against nature.

Most of these types of lust are no longer regarded as illicit, at least if they don’t involve a man gazing on a woman. Having sex outside of marriage, as well as becoming a single mother, are actions now commonly regarded as highly desirable. A man who has sex with another’s spouse is now called a man not liable for child support. While incest oddly remains condemned, having sex with a nun (a religious sister) is no longer considered wrong. In fact, some now regard having consensual, lesbian sex with a nun to be salvific. Same-sex sex and same-sex marriage have been recognized by the U.S. Supreme Court as rights set out in the U.S. Constitution.

Rape and defilement are more complex matters. Rape of women and falsely accusing men of rape have been serious crimes throughout all of human history. However, authoritative media today regularly trivialize the issue of falsely accusing men of rape. Medieval understanding of rape didn’t include women raping men. Women raping men only recently was included within the FBI’s definition of rape. The reality that men and women are raped in roughly equal numbers isn’t widely recognized. Moreover, a woman having sex with an under-age boy almost always isn’t called rape in news reports. It does, however, put the boy at risk of having to pay child support to his rapist. Some now regard a woman having consensual sex with a man as defiling the woman. In practice, a man behaving sexually in a way that displeased a woman and thus defiled her can be subject to harsh extra-judicial punishment when the woman decades later decides to publicly denounce him for his offense. Leading authorities didn’t prominently report such denunciations in the Middle Ages.

Floretus recognizes marriage as a sacrament and describes marriage as having an exalted position and essential functions. It declares:

God first established marriage in Paradise,
joining the man and woman whom He had created for
lawfully bringing about and fostering offspring,
and to avoid, on account of its sin, lust of the flesh.
The goods of marriage are offspring, faith, and the sacrament.
The faithful who marry ought to guard these three
so that they might beget offspring and always keep their faith,
so that they might always live together and help each other at the same time.

One medieval writer described marriage as a prison. Another eloquently cautioned his friend against marriage. Floretus idealistically describes marriage as an institution of Paradise. However, Floretus puts forward broad grounds for annulling Hellish marriages:

Marriage is made by consent, but the consent
itself ought to be shown by signs or by words.
When the marriage is contracted, then let it be seen
before it is performed whether an impediment is known.
For they sin wickedly who unit in matrimony against the law.
Error, status, a vow, affinity, crime,
disparate social status, law, orders, a bond, reputation,
if you are related by marriage, if by chance you cannot copulate:
these forbid marriages to be performed, they retract those performed.

The divorce industry is big business. Yet ignorance of medieval Latin literature has caused many factors with deep historical roots to be overlooked in litigating divorce cases and in seeking annulments. Better knowledge of Floretus could help divorce litigators to consume more quickly all of their clients’ financial resources in arguing divorce cases. Better knowledge of Floretus could help divorced persons more easily find grounds for claiming an annulment.

Most persons are almost wholly ignorant of laws governing divorce, alimony, child custody, and child support. Yet those laws are hugely important in ordinary persons’ lives. As part of the core curriculum of late-medieval education, Floretus helped to teach young men about family law. Young women and men desperately need such education today.

The Middle Ages has left us some good poems, and many bad ones. One of the worst is certainly this one {Floretus}. It is therefore better for the author that his name is not known.

Hauréau (1890) p. 44, cited with English translation above in Pepin (1999) p. 213. Medieval thinkers had a much different view. At least thirteen manuscripts of Floretus have survived. See Floretus at Arlima. It was printed as a separate work at least three times in Cologne between 1491 and 1499. Id. p. 215. Numerous texts of Floretus also survive in editions of works from Auctores octo morales, e.g. Liber Minores (see Gutiérrez (2009)).

[2] Floretus, ll. 178-88, adds after the catalog of lust further reasons to flee lust. The last couplet picks up the marriage motif of Paradise (Eden / Heaven) and adds the implicitly contrasting motif of the Underworld (Hell):

It {lust} darkens our vision and eventually takes away Paradise:
it subjects us to demons and drags us at last to the Underworld.

[image] Catalog of lust in Floretus. From a Floretus manuscript held in München, Bayerische Staatsbibliothek. The online text doesn’t specifically identify the manuscript.