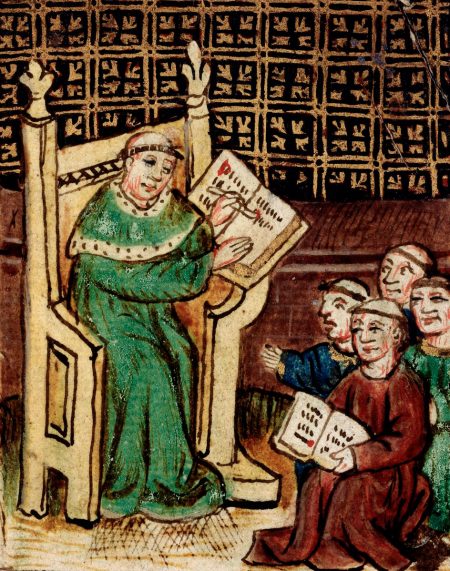 In contrast to our intolerant and repressive age, robust and vibrant public discourse existed in the relatively liberal medieval world. Medieval intellectuals, like unlearned children today, were intellectually capable of distinguishing between sticks and stones in some persons’ hands, and words in the mouths of others. Inquisitions and tribunals didn’t strive, with administrative torture, expulsions, and other vicious punishments, to make everyone safe from offensive communication. No pervasive codes of conduct promoted tyranny. Persons could vigorously disagree with each other, strongly dissent from prevailing orthodoxy, and deliver harsh criticism. No one had to fear being mobbed and destroyed because someone said that he made her feel uncomfortable. The great thirteenth-century rhetorician Boncompagno da Signa provides an inspiring example of the robust and vibrant public discourse so lacking today.

Boncompagno targeted his rivals with harsh invective that figured them as a monstrous beast. He allegorized his rivals as sin. They were the beast of jealousy, whose mother is pride:

This beast has nine heads, doubled horns, three tails and four feet. Each of these fights by itself, harms by itself, nor does it strike without pouring out venom. It is also horrible to be seen. It never rests, but surveys the world, tracking down any sort of good fortune, and always tries to mess it up, but is confounded. It grumbles, shrieks, rages, becomes delirious, swallows up, harasses, becomes livid, becomes pale, clamors, becomes nauseated, hides, barks, bites, raves, foams at the mouth, rages, seethes, snarls, and groans when it cannot cause harm. It holds its mouth open. It has very sharp teeth and tongues like arrows of continually burning lightning.

As one would want to say upon seeing a coven of anti-meninists, Boncompagno wrote, “O how terrible and abominable is the sight of this beast {O quam terribilis et abhominabilis est huius bestie aspectus}!” Like cancer, it causes innumerable deaths and afflicts many with various torments.

Boncompagno vigorously affirmed the value of his own work. One of his most important works, sometimes called Rhetorica antiqua {The Rhetoric of Antiquity}, Boncompagno actually titled with his own name:

I {this work} am titled Boncompagnus from my composer’s name. He, wheeling about to rule the field of eloquence with exalted genius and a solemn style, has brought me into the light of day for the enlightenment of the nations and the glory of the scholastic profession.

The prologue to this work features a dialogue between the work and its author. The work asks Boncompagno:

I ask to be instructed by you: how should I respond to those poisoned by the venom of jealousy, those who say that I am too prolix and confused?

Long before Ralph Waldo Emerson, Boncompagno’s large mind contained multitudes and his work was like a mighty cleansing flood. Boncompagno thus responded to his work’s question about jealous rivals:

You should pull on their neck with bit and bridle. You should say that you are probably similar to the Nile, which irrigates scattered islands and lands by its adjacent rivulets and everywhere makes them germinate. Yet the depth of its waters does not change. It is certain and the effect of the matter shows that you could be divided into a thousand particles and more. Each of them might irrigate an arid heart with the fluid of doctrine and bring forth a sprout of thought like a rivulet derived from a river. Thus divide your water in the streets. Do not care what the envious may say. Because of others’ happiness, the envious burn with inextinguishable fire.

Boncompagno hoped that “with the most truthful arguments I shall have the strength to break the teeth of my rival {emulorum dentes verissimis valeam frangere argumentis}.”[3] Boncompagno produced many books addressing complex issues of rhetoric and ars dictaminis. Boncompagno also fought courageously for social justice. But the world was too corrupt to be washed clean by the flood of Boncompagno’s work.

Nonetheless, Boncompagno persisted. After writing Palma, an introduction to technical terms in the study of letter-writing, Boncompagno wrote Oliva:

The dove brought back to Noah a verdant olive branch. This gesture signaled that Noah could leave the ark at will, because the waters of the flood were already receding from the face of the earth. Under that representative likeness, I therefore dare to title my present book. By its effect, this title Oliva fully convinces me that my books and treatises are received everywhere and authenticated by the judgment of the wise. Hence swarms of envious persons are struck dumb. They might be likened to those in the waters of a flood.

Boncompagno wasn’t an apparatchik. He didn’t produce a stream of work currying favor with influential colleagues and supporting dominant ideology. He fought strongly against his rivals on behalf of truth and love, yet also with mercy:

The reasons why this book should be called the Oliva should not be left in silence. It can deservedly be titled the Oliva, since the oil of adulation does not come from it, but instead a liquid of sincere love. I had first made the Palma, which rendered me victorious over the envious. Now I wish to add a sibling Oliva to it, so that I may father a double victory. Many people carry olive branches in hand as a sign of victory and of happiness. To touch in brief summary the complete truth, this book is titled the Oliva, because olive oil is the material of piety itself, and it signifies mercy.

In our benighted age of ignorance and bigotry, academics and intellectuals everywhere should turn to Boncompagno da Signa for inspiration and guidance.

Boncompagno endured vicious intellectual attacks and mendacious acts. One of Boncompagno’s early works was Five Tables of Salutations {Quinque tabule salutationum}, a work on how to begin a letter. Boncompagno’s rivals stole that work from him. In the prologue to his Palma, Boncompagno declared:

I therefore implore those into whose hands this book shall come that they should not wish to give it to my rivals. After erasing its title page, my rivals said that I did not compose the Quinque tabule salutationum. They are those who have been applying smoke to my works on letter-writing. Darkened by the smoke, these works seem to have been composed in much earlier times. With such wickedness they take away my glory.

Boncompagno displayed sharp wit and sophisticated rhetoric in associating his critics with plagiarists:

By Almighty God I swear that furtive plagiarists not excoriate these books by scraping off their titles, just as some have excoriated my other books. Indeed, may those scribes who disfigure all urbanity of eloquence with falsifying pens and those jealous and furtive plagiarists be struck with the sword of excommunication.

To excoriate literally means to scrape off skin. That’s what a person would literally do in scraping off a title from a vellum manuscript. Excoriate more figuratively means to criticize harshly. Boncompagno thus sarcastically presented his rivals as both harshly criticizing his work and seeking to appropriate it. In addition, the pen and sword are closely associated in poetry. In invoking “the sword of excommunication,” Bongcompagno implied both a serious church penalty and those furtive, falsifying scribes ceasing to write.

New, huge technology companies are now establishing excommunication as a policy to be applied broadly, vaguely, and arbitrarily. The medieval cultural inheritance supporting relatively vibrant and open public discourse is rapidly vanishing. Formal freedom of speech isn’t sufficient for enlightened intellectual life. A public propaganda apparatus and pervasive fear can arise even without the construction of a Siberian gulag. Democracy dies without vigorous dissent against the nomenklatura and the ruling elites.

[1] Boncompagno da Signa, Boncompagnus / Rhetorica antiqua {Rhetoric of Antiquity}, Prologue 3.3, Latin text from Basso (2015), English translation (modified) from Wight (1998). The subsequent four quotes above are similarly from Boncompagnus, Prologue 3.7 (O how terrible and abominable…), 1.1 (I am titled Boncompagnus…), 3.19 (I ask to be instructed…), and 3.20 (You should pull on their neck…).

probably referred to him {Boncompagno} when they respectively invited Bologna to rejoice at being rid of the ‘ridiculus Geta’, and described as erring sheep those who had left Bologna for other academic institutions.

Arguing about the presentation of cursus in teaching ars dictiminis, Boncompagno derided other teaches as “masters of dactyls {magistri dactylii}.” He declared:

Boncompagno, Tractatus virtutum Boncompagni {Boncompagno’s Treatise of Virtues} 35 (masters of dactyls), 31-2 (It is not a virtue…). Boncompagno further argued:

To issue a single set of definite and binding rules involving dactyls and spondees for the beginnings and ends of prose clauses would not, therefore, be a sensible doctrine, but instead the utter confusion of the dictatores.

Within the vibrant intellectual life of medieval Europe, vigorous disputes about such issues endured for centuries. Simon O., in his Summa dictandi from the first quarter of the fifteenth century, harshly criticized other teachers:

Certain idiots may boldly blurt out that terminations of this sort are not included in the set of cadences. These people ignorantly rave, for they speak without understanding. Indeed, philosophers who seek out the truth devised terminations of this sort in order to preserve their meanings: for it would be difficult for them and for preachers and composers of homilies to attach their intention to a single termination’s cadence.

if anyone should presume to excoriate you, you will appeal to the magistracy and you will able to bring legal actions against them for theft and injuries.

Raccagni, Gianluca. 2013a. “Reintroducing the emperor and repositioning the city republics in the ‘republican’ thought of the rhetorician Boncompagno da Signa.” Historical Research. 86 (234): 579-600.

Raccagni, Gianluca. 2013b. “The teaching of rhetoric and the Magna Carta of the Lombard cities: the Peace of Constance, the Empire and the Papacy in the works of Guido Faba and his leading contemporary colleagues.” Journal of Medieval History. 39 (1): 61-79.