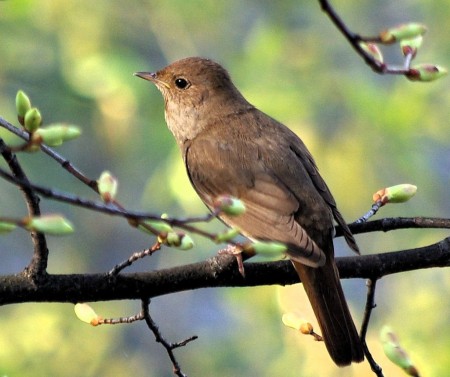 Given their sexually distinctive risk of being cuckolded and lack of social concern about cuckoldry, men throughout history have tended to be jealous of their wives’ attention. Yet just as performance anxiety tends to undermine performance, jealousy tends to undermine love. Women prefer strong, confident men within social systems that systematically devalues men’s lives. Men’s lack of self-confidence in love helps to create the allure of the nightingale’s song.

Consider the medieval story of a rich, old knight married to a beautiful, young woman. Next to that couple lived a poor, young knight married to a wealthy, old woman.[1] The younger spouses began a love affair. The old knight noticed only that his wife wasn’t remaining in bed with him at night. She would get up and listen at the window for a long time to the song of a nightingale.[2]

O good nightingale, you have been doing what you should do; I am the cause of your death.

The wife had made her jealous husband feel inadequate.

Despite her recognition of her guilt, the wife then incited her young knight neighbor-lover to violence. She immediately sent him a message about her husband having killed the nightingale. The young knight came to her home and killed her husband. Soon thereafter, the young knight’s old wife died of natural causes. He then married the young woman. They lived many years together in peace. This ending jars ironically with the gender protrusion in mortality that the tale exemplifies.

Marie de France, a medieval woman writer with loving concern for men, ended her version of the tale with a culturally sophisticated critique rather than the killing of the husband. Courtly love ideology positioned men as obedient love-servants to morally superior, idealized women. In Marie de France’s lai Laustic, the young woman sent the dead nightingale to her young lover. He then made the dead nightingale into a sacred relic:

He ordered the best smith to mold
A tiny vessel, all pure gold
(No iron or steel), and good stones,
Precious ones, expensive ones,
And make a good tight-fitting lid.
Inside, the nightingale he hid.
Then he sealed up this reliquary
To ever after with him carry.

In the Latin poem Sincopus, a foolish, greedy man castrated himself and carefully preserved his genitals as a treasured relic. Similarly invoking religious ritual, Marie de France connected the theme of castration to the oppressive ideology of courtly love. Courtly love focused not on true chivalric action in bed but on non-unitive idolatrous worship.

The historical oppression of men through gynocentrism undercuts men’s sexual allure. A man who retains self-confidence despite these circumstances is far more enthralling than a nightingale.

In all other marriages he prohibited dowries; the bride was to bring with her three changes of raiment, household stuff of small value, and nothing else. For he did not wish that marriage should be a matter of profit or price, but that man and wife should dwell together for the delights of love and the getting of children.

Plutarch, Lives, Life of Solon 20.4, from Greek trans. Bernadotte Perrin (1914) for the Loeb Classical Library. Gesta Romanorum 169 tells of the noble knight Ligurius who established twelve laws. Among those laws:

The tenth law enacted that virgins be married without dowry; the eleventh, that wives be not chosen for money.

[3] In Boccaccio’s Decamaron 5.4, the young woman Caterina loves the man’s bird and joyfully catches it.

[image] Thrush nightingale. Thanks to cheloVechek and Wikimedia Commons.

One thought on “wife caused nightingale’s death, anxious husband killed for it”