Come, Abelard! for what hast thou to dread?
The torch of Venus burns not for the dead.
Nature stands check’d; Religion disapproves;
Ev’n thou art cold — yet Eloisa loves.
Ah hopeless, lasting flames! like those that burn
To light the dead, and warm th’unfruitful urn. [1] 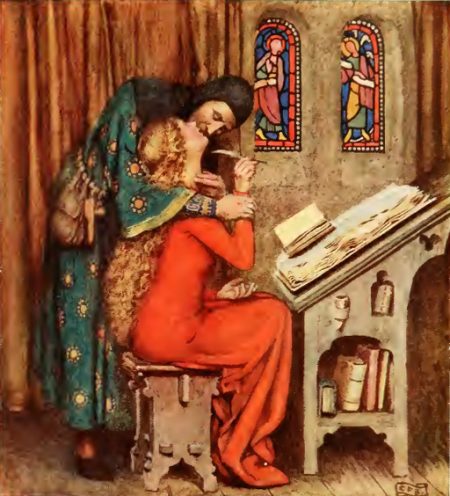 Under gynocentrism, men are subservient to women. Women expect men to come when women call. Men are taught to work to provide money to women and children and to be prepared to die for their country. The public propaganda apparatus proclaims to men, “work sets you free {arbeit macht frei}.” Not surprisingly, men are expected, in one way or another, to pay for having sex with women. That’s crucial context for understanding Roscelin of Compeigne’s vicious letter to Peter Abelard about his affair with Heloise of the Paraclete.

In Paris early in the twelfth century, Abelard had been a teacher of Heloise. Their relationship developed into a torrid sexual affair and then marriage. Angry with Abelard over difficulties that had developed in Abelard’s marriage with Heloise, Heloise’s uncle Canon Fulbert arranged to have a band of thugs break into Abelard’s bedroom and castrate him. That terrible form of violence against men is deeply entrenched in human society. Despite being castrated, Abelard continued to work as a teacher. Like most men, he provided money to his wife Heloise. She became abbess of the Benedictine Oratory of the Paraclete. In addition to receiving money from Abelard, Heloise assigned him various literary and theological work to do for the nuns of the Paraclete.[2]

Following a heated exchange of theological views with Abelard, Roscelin of Compeigne about 1120 derided Abelard for providing money to Heloise. Abelard taught Heloise the profound meaning and practice of human love. Roscelin disparaged Abelard for his teaching. Roscelin reduced Abelard’s relationship with Heloise to unfulfilled prostitution:

you do not stop teaching what should not be taught, even when if it were to be taught, you should not teach it. You collect money for the falsehoods that you teach, and you don’t even send the money to your whore as payment for expected sexual intercourse — you take it to her yourself. While you were able, you expected to be given sexual pleasure for a price. Now you give payment, more as compensation for past sins than as buying future sin. And the teaching that you once abused for sexual pleasure, you to this day abuse due to your inclination. But, thank God, even in your need, you are not able.

Men who are not able — men suffering from impotence, or even worse, social or physical castration — deserve sympathy, compassion, and disability payments. Abelard, as a castrated man, surely did not provide money to his wife Heloise as compensation for his past sexual sin, which was also her past sexual sin. He provided his wife with money because that’s men’s long-established, oppressive gender role. For teaching Heloise, Abelard probably received room, board, and money. Abelard almost surely never paid Heloise for sex.[4] In contrast to Roscelin’s false, gender-stereotyped claim, Heloise’s family paid for her opportunity to develop a sexual relationship with Abelard. If it weren’t for castration culture, that pay to Abelard would have been money well-spent in helping Heloise to live a full and happy life.

Compared to the mythic gender wage gap, the gender protrusion in payment for sex is a far worse social injustice. Like the mythic gender wage gap, men paying women for sex is used against men even when it doesn’t exist in reality. Every man waiting for a woman (a young, attractive, meninist woman) to call him and ask him out to dinner at a restaurant (a good, expensive restaurant) understands the fundamental gender injustice. What remains is to change it.

[2] Work that Heloise assigned to Abelard included writing hymns for liturgy in the Oracle of the Paraclete and writing answers to theological questions that Heloise sent to him (Problemata Heloissae).

Roscelin claimed, “what from Dan to Beersheba is famous we shall unfold {quod a Dan usque Bersabee notum est replicemus}.” In the Hebrew Bible, Dan is the northernmost city of the tribes of Israel. Dan is associated with the idolatry of Jeroboam’s golden calves. 2 Kings 10:29, 2 Chronicles 13:8. Beersheba is a place in the desert in the kingdom of Simeon, south of the the main part of the kingdom of Judah. Beersheba is associated with the Hebrew patriarchs Abraham and Isaac. Genesis 21:22-34, Genesis 26:23-33.

In the relatively liberal and enlightened medieval period, scholars engaged in vigorous, spirited, and open contention. Roscelin claimed that Abelard lived “in the monastery that is in fact that of St. Dionysius {in monasterio siquidem beati Dionysii).” He claimed that there was “gathered together a multitude of barbarians {congregata barbarorum multitudine}.” According to Roscelin writing to Abelard, that was a place “where you would devote yourself to your inclination and lust {ubi voluntati voluptatique tuae deservires}.” In literary history, men’s sexually has commonly been harshly disparaged.

[4] In an earlier letter to Abelard, Heloise declared that she preferred to be Abelard’s whore {meretrix} rather than Abelard’s wife. See Letter 2.10 in Luscombe & Radice (2013) pp. 132-3. Like Theophrastus and Matheolus, Heloise courageously and generously recognized disadvantages that men suffer in marriage. Heloise’s willingness to be Abelard’s whore doesn’t imply that Abelard actually paid Heloise for sex.

[image] Abelard kissing Heloise to provide her with a short break from her strenuous intellectual work. Illumination from between pages 12 and 13 in Fortescue-Brickdale (1919). The great medieval humanist Boccaccio in 1361 wrote an influential volume entitled Famous Women {De mulieribus claris}. Fortescue-Brickdale (1919) follows in that tradition.